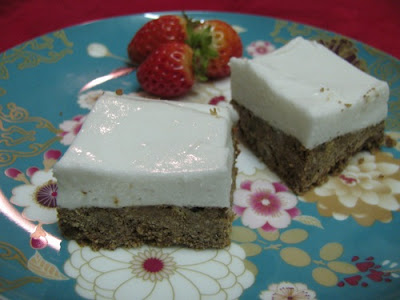 It took me some time after I became vegetarian to discover that most marshamllow is made with gelatine and hence is not vegetarian.  I don't miss it much.  Actually I do eat marshmallow from time to time but I have never tried making it at home.  There is no gelatine in my kitchen.  I would have no need for a vegetarian version if not for one of my favourite childhood slices that has a marshmallow topping.  For years I have been telling myself I will try making it. 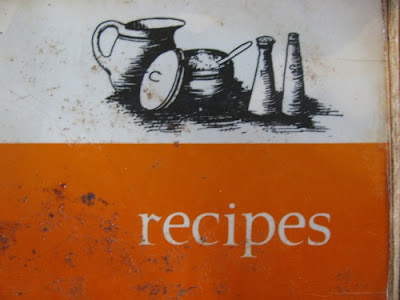 Finally I have made a vegetarian version of my mum's slice.  No gelatine was involved.  A packet mix and a candy thermometer were needed, however, to accomplish this feat!  Vegetarian marshmallow seems a tricky business.  Lysy's experiments had made me wary.  It wasn't until I found the Angel Food mix that I felt I might actually do it.  Then I discovered I needed a candy thermometer.  Another mental hurdle to leap over.  I love baking but shy away from candy recipes and the precision needed in heating a bubbling sugary mixture.  It seemed a downright dangerous thing to do. 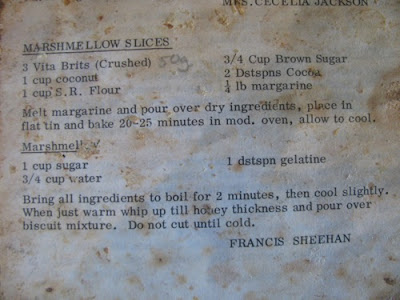 I let the candy thermometer sit in the drawer for some months before I would go near it.  That is how much I loved my mum's marshmallow slice.  It was worth facing my nemesis in the kitchen.  The slice is the perfect mix of soft, crisp and crunchy.  It melts and crumbles and pleases with all the hallmarks of a great slice - cocoa, coconut and processed foods (yes often the processed foods are condensed milk and bikkies for me but in this slice it is the weetbix). 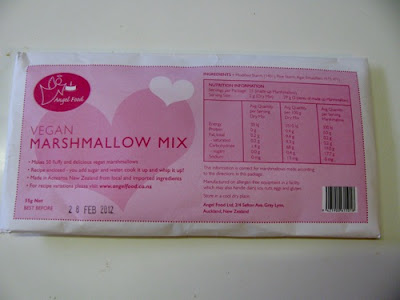 I confess that my mum gave me the recipe ages ago over the phone.  I scribbled it down and then I lost it.  So I found it again while at home over Easter.  This is the cookbook I told you about back then.  It is merely called Recipes with no author, publisher or date.  I love not only the recipe that reminds me of how I would read recipes as a child - so different to today - but also the splatters all over the recipe that show just how often my mum used it.

The base was the easy bit.  As always, Sylvia was keen to help out.  She and dolly helped to crush the weetbix that go in the bottom layer. 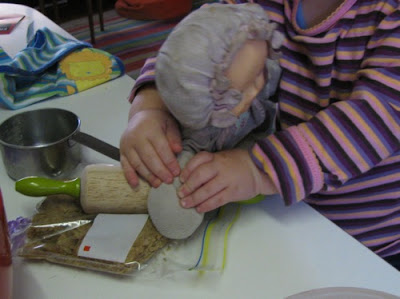 While the base cooled, I faced the challenge of making marshmallow.  It was a fiddly job with lots of steps.  The package I had came with an A4 page of instructions.  I had to read it over and over to try and get my head around what I needed to do.  I also found the instructions online at Angel Food.  This confused me further as they were slightly different, and the package size was also a bit different.  I really love this slice or I never would have bothered. 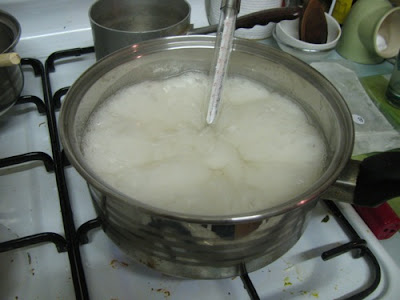 First task was to boil package A with water and sugar.  This was my moment to use my thermometer.  I had to practice clipping it on the side of the saucepan a few times because I was quite nervous about it.  Of course it wasn't as scary as I had feared. Though it might have been easier if I wasn't needing to take a Mexicale Pie out of the oven while the mixture bubbled and boiled. 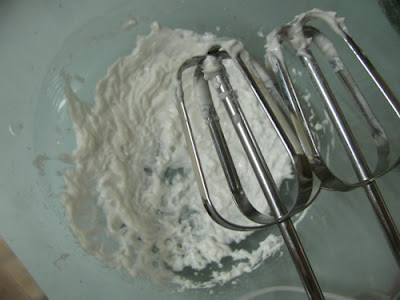 Package B was then beaten with a little water and the sugar syrup drizzled in while beating.  I think this marshmallow is the longest I have ever let my beaters go for.  It must have taken me 10-15 minutes until it was white and creamy.  Sylvia watched with fascination. 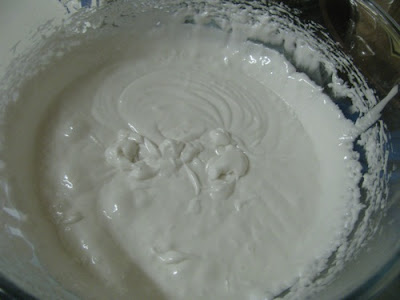 And the verdict?  At first I was slightly disappointed.  The base seemed rock hard and the marshmallow was overwhelmingly sweet.  In fact the marshmallow mix had twice as much sugar as the one in the original cookbook recipe.  E wisely suggested that I lop off some of the marshmallow.  I cut the slice into squares and cut about two thirds of marshmallow off each square.  That made them taste better.  After a day or two the base had been softened by the marshmallow and it tasted just like the one mum makes.  I was so happy with it and felt like Proust's protagonist with his madeleines. 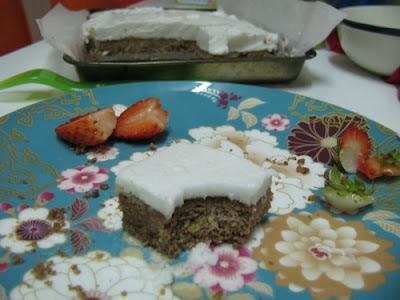 Meanwhile I had a bowlful of marshmallow off-cuts that sat in the fridge for a week.  It was so sweet that I couldn't bear to eat it by itself.  I considered baking it into a muffin but ended up fulfilling a wish to try rocky road.

I bought jersey caramels, coconut diced, violet crumble, marshmallow, turkish delight, orange candied and 45% chocolate (that is $25 worth of ingredients).  But when I melted the chocolate to pour over the ingredients, the marshmallow just melted and made the chocolate odd.  We ate most of it and threw out the last bit because the turkish delight and honeycomb melted after a while.  I am not sharing the recipe but suggest you check out Lorraine and Baking Addict's versions that inspired me. 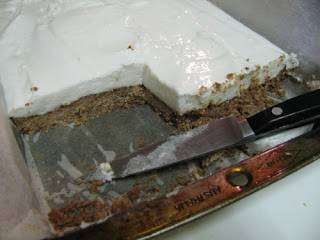 As for the slice, I think I might make it again.  For any of you who buy the Angel Food marshmallow mix and have a tendency towards to procrastination, I can reassure you that my package was almost 5 months older than the best before date and still worked.  I had been worried it wouldn't and bought another packet with a later best before date as a back up.  I think I will probably make this slice again some time to use the other package but am not quite sure what I will do with the surplus marshmallow.  Any ideas?

To make the base, melt butter and pour over dry ingredients.  Mix until combined and spread into a lined and greased small slice tin.  Bake at 180 C for 20-25 minutes.  Cool in the tin.

Make marshmallow.  If you eat gelatine you can make it the traditional way.  My packet was made up of modified starch, rice starch, agar and emulsifiers.  I boiled water and sugar with one package.  I beat the other package which seemed to be quite starchy (not sure if the agar was also in the mixture) and then gradually added the sugar mixture and beat this for 10-15 minutes until it was creamy.

When marshmallow mixture is a honey thickness pour over cooled base.  Allow marshmallow to cool and set - I put mine in the fridge.  Eat at room temperature.  Mine kept out of the fridge in a air-tight container for about an hour.

On the stereo:
Scott Walker: The Collection
Posted by Johanna GGG at 17:13