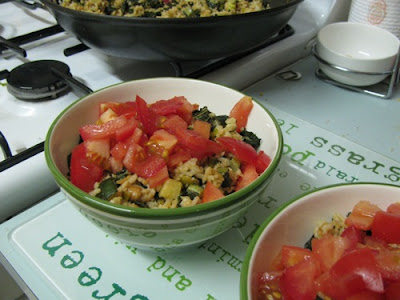 I have such good intentions to return to old recipes and yet the ingredients drive me down the road less travelled.  This week I had lots of leftover rice that I intended to make into a rice gratin, despite having no eggs to spare.  (Sylvia is having a boiled egg every morning so I have to account for these at the moment.)  Time was also tight.  I thought maybe I wouldn't bake it and then I remembered Vegan Yum Yum's tahini sauce which would use a lime from our tree.  Dinner looked very different from what I had planned.

Eating dinner was also very different to how I had planned it.  I knew it was taking too long to eat before Sylvia went to bed but I had thought we might get her down to sleep and eat.  However it was just one of those nights.  She refused to sleep no matter what we did.  Finally I thought she was settled.  We sat down to eat on the couch in front of the telly and after a few mouthfuls she started crying again.  Not the most relaxing of meals!  At least it was very tasty. 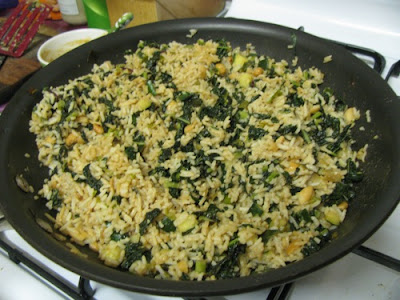 I wish Sylvia would eat this sort of food.  We had a multicultural day at her child care this week.  It was hard to know what to make to represent her culture.  I eliminated sweet food (not ANZAC biscuits, shortbread, hedgehog and grubs), nuts (there went sausage rolls, haggis and nut roast), anything that was best fresh (so no pumpkin scones or damper), or anything that was difficult to transport and tricky for kids to eat (no pumpkin soup either).  Plus Sylvia likes her food plain.  So what did I take?  Bread and cheese.  Sylvia and I made potato bread to represent her Irish roots and we took cheese so she would have some protein with her lunch.  I felt like we took the most boring food to child care.  But you and I know that the way we eat at home is quite different.

Heat oil in a large frypan and slowly fry the leek and kale for about 20-30 minutes.  (Vegan Yum Yum used kale and cut the stalk out of hers but I kept mine in the dish which meant it took a bit longer to cook.)  Add garlic, thyme and zucchini.  Cook another 5-10 minutes until the zucchini is soft.

While the vegetables are cooking, make the tahini lime sauce by mixing all ingredients together in a small bowl.  I also had rice that had been in the fridge and ran it under boiling water before adding to the frypan.

Add rice, tahini lime sauce, baby spinach, baby kale and cashews.  Stir together to mix well and cook a few minutes.  (If you have to settle a crying baby you can let it rest until you are ready to eat.)  Serve in bowls topped with chopped tomato.  Will keep well overnight in the fridge.

On the stereo:
The music from the Rainer Werner Fassbinder Films: Peer Raben
Posted by Johanna GGG at 21:57