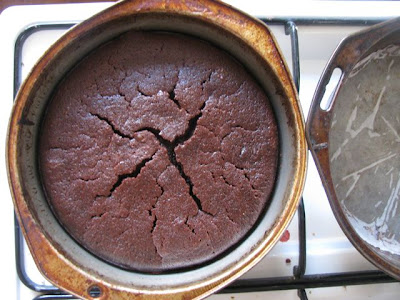 The last week has been one of highs and lows. The joys of good cooking followed by the disappointment that we were too sick to feel like eating it. The fun of playing with my nieces on a holiday, which ended all too soon. So let me take you back to last Monday, the Queens Birthday holiday, when Sylvia and I visited my family in Geelong. 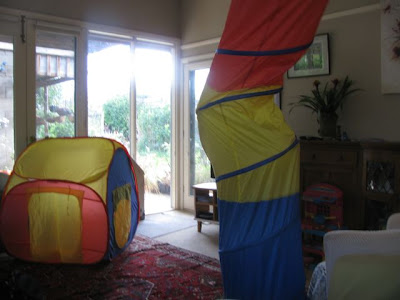 We arrived at my mum and dad's on Sunday night but after seeing Ashton and family, were too late to see my sister Susie’s girls. So on Monday morning they came over. Sylvia loved it. Next to them, her eating doesn’t seem quite so fussy. (Though throwing half a bowl of baked beans on the floor is a new low in her eating!) She had little cousins to push her on the swing, protect her from my folks’ dog Woody (who caused her to cry and cry) and amuse her in any way they could. 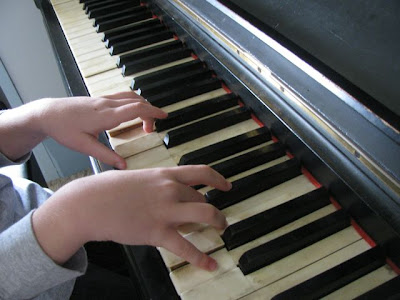 Susie brought over an old fabric tunnel for Sylvia to play in but she wasn’t too interested. Grace and Ella had a great time playing in their old tunnel. Interesting how kids can find new fun in old toys. Meanwhile I rekindled an old interest (thanks to a bit of research on the web) and showed Maddy how to latch hook. These girls love to play with my camera so here is a photo that we took of Maddy’s hands. You can see they are hands that love to create and craft. 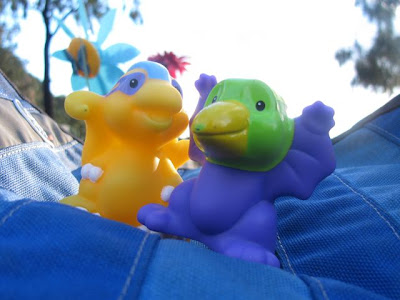 All too soon the girls had to go home for lunch and Sylvia was tired so we hoped in the car so she could have a sleep on the way home. I brought mum’s cooking with me – a lovely honey gingerbread and leftover spanakopita. Mum had served the spanakopita on Sunday night with an eggplant dish like this one but I had other ideas for how to serve the remains. 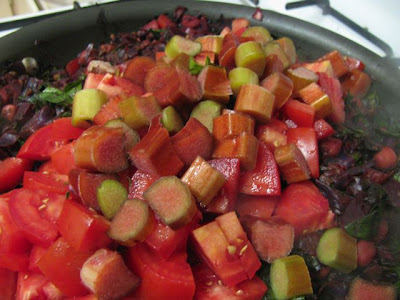 I had decided to make a crumble using the remains of my beetroot and rhubarb that I had bought for the recent beetroot and rhubarb soup. Making the soup had helped me understand how rhubarb acted in a similar way to lemon in a savoury dish. I have used mustard with rhubarb before and knew that would work. So I started chopping up vegetables and thinking about other flavours. I had some horrid tomatoes that were only good for cooking and bits of cheese and seeds that had been hanging around for a while. 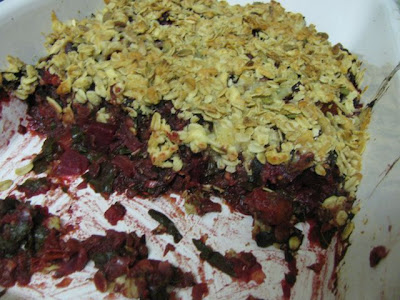 When I told E I was doing a vegetable crumble, he asked what was in it. Just whatever is in the fridge and needs using, I replied. Once I had all the scraps of vegetables in the mix, there was very little need for any additional flavouring as it was already quite tasty. It was surprisingly good though quite intense. It was an excellent accompaniment to mum’s spanakopita. It was an excellent way to use up bits and pieces from the crisper like mushrooms, cabbage and beet greens. But after two nights our stomach turned against such flavoursome food. I put it in the freezer and have added a little tub of crumble into a pumpkin soup tonight.

On the same night that I made the crumble I satisfied a hankering for a chocolate sour cream cake. I have felt the need to find a good recipe for such a cake ever since I bought some sour cream quite some weeks ago. The sour cream had been used up before I first spied Smitten Kitchen’s recipe for Sour Cream-Chocolate Cake with Peanut Butter Frosting and Chocolate-Peanut Butter Glaze and then saw Carla make a vegan version with some of her vegan sour cream. 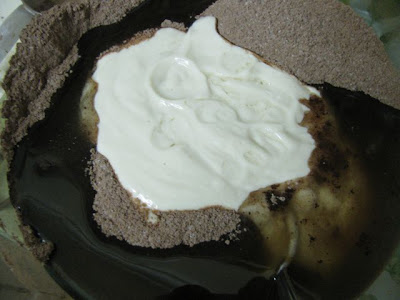 I had been fascinated by the sour cream that Carla first made with tofu, mustard, dill and garlic because it also included umeboshi vinegar. I have a bottle of the vinegar that I bought on a whim ages ago and struggle to find uses for. I was interested to see Carla revisiting the tofu sour cream in a cake. I had to try this. It tasted slightly of tofu. But, following Carla’s instructions to use Japanese silken tofu, I got a wonderful creamy concoction that you can see in my recent soup.

The cake is one of those soft moussey fudgy cakes that is dark with lots of cocoa. I took one out to taste and let the other cool in the tin overnight. Both cracked but possibly due to my decision to use two rather than three cake tins. Even without frosting, it is quite rich. 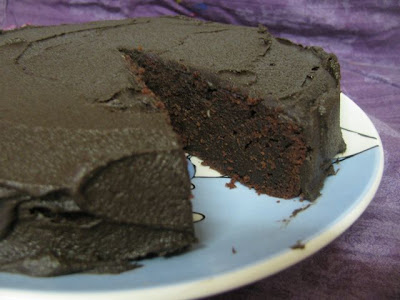 Some of this one was sent some home to my dad, some came to work with my lunch and we still have about half a cake that is edible. It is a cake that with all the frosting could be made as a special cake but without it, is one that can knock about the house and linger in the freezer. I enjoyed the tofu substitution for added protein and less fat.

All in all, it has been fun experimenting with some new flavours and vegan substitutes but my advice is that this is not recommended in times of a delicate stomach.

Previously on Green Gourmet Giraffe:
This time last year: What does home mean to you?
This time two years ago: Novel Food 4: Drowned Broccoli
This time three years ago: Guinness Chocolate Cake for Bloomsday

Beetroot and rhubarb crumble
serves about 6
Crumble:
Heat oil in a large frypan and cook onions for about 5 minutes over medium heat. Add beetroot, carrots, celery and cook for about 15 minutes. Add garlic, salt, cabbage, beet greens, mushrooms, chickpeas, and lentils. Cook for about 10 minutes. Add tomatoes, rhubarb and water. Cook for 5-15 minutes until all vegetables are cooked and most of the water is absorbed into a nice sauce. It took me about 45 minutes from when I started cooking the onions but I noticed the beetroot were cooked after about 30 minutes so you could possibly do it in less time than me.

While vegetables are cooking mix all crumble ingredients and grease a large casserole dish. (NB I used two dishes but I think it is better to have the crumble piled up rather than quite thinly spread.)

When vegetables are cooked, tip into casserole dish. Bake at about 200 C for about 30-45 minutes until crumble is crisp and golden brown.

Mix the flour, sugar, cocoa powder, baking soda, and salt into a large bowl. Stir in the oil and sour cream to make a very stiff mixture. Then gradually beat in the water. The mixture will now be quite liquid. Stir in the vinegar, vanilla and eggs to make a glossy slightly thickened batter.

Pour batter into prepared cake tins. Bake for 30-35 minutes if using 3 cake tins. If you are using 2 cake tins like I did it will take considerably longer – I think it took me another 20-30 minutes. You will know when it is ready because the middle will spring back when touched and a skewer inserted in the middle will come out almost clean.

Cool in cake tins for at least 20 minutes or until cold. It can be eaten with or without frosting or icing. I used a chocolate buttercream frosting which I found very rich. I can’t imagine how rich it would be with the original recipe which called for a cream cheese peanut butter frosting and a chocolate frosting! Keep in an airtight container. After a week our cake is still quite edible though past its best.