Feta Scones in a Flash 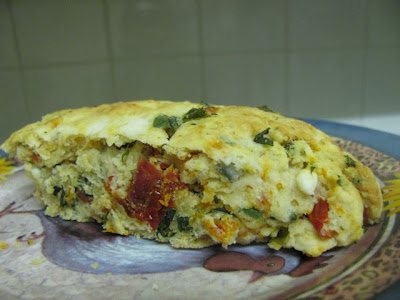 I am glad it is the end of the week. I would love to write up all the recipes I have been making but my energy is at low ebb so I will just share with you some simple scones I made on Wednesday. It was one of those pleasant social days where mundane tasks like cleaning and grocery shopping are cast aside for the pleasures of catching up with friends over good food.

By evening I was exhausted. While the chores can be cast aside, I still have to get Sylvia fed, bathed and sleeping, which is far more work than a simple sentence suggests. And I had a bunch of oregano I had bought on a whim even though I never cook with fresh oregano. What was I thinking? 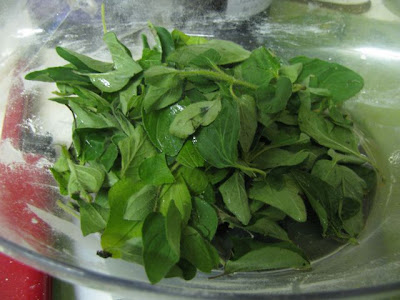 Fortunately I now have Stephanie Alexander’s Cook’s Companion. One of the reason I wanted it was that it has a section on vegetables, fruit, herbs, spices (and I just skip the meaty bits), each one having a list of foods they go well with. Oregano goes well with tomatoes and soft white cheeses according to this comprehensive book. I had feta and sun-dried tomatoes. 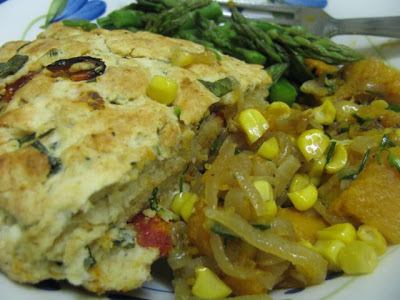 So I made feta, sun-dried tomato and oregano scones. They were adapted from Delia’s Feta, Olive and Sun-Dried Tomato Scones. I was tired, I was rushing and I had had no time to go to the supermarket. So I simply made the scones, forgot to cut them into wedges and served they with some asparagus from the CERES market and some leftover onion, pumpkin and corn. A quick and easy meal but rather pleasing. The scones were colourful and tasty with a hint of spicy warmth. By the end of the night they were all gone.

Place flours, baking powder and spices in large mixing bowl and use a knife to mix in 1 tbsp oil drained from sun-dried tomatoes and 2 tbsp olive oil. It will result in little blobs of flour and oil – like lumpy breadcrumbs and flour. Don’t worry too much about mixing it all in.

Stir in the feta, sun-dried tomatoes and oregano. Mix the egg and milk in a small bowl and add to flour mixture (Delia said to add half and then gradually add as much of the other half as needed – I didn’t read the recipe and just added it all – mmm soft dough!) It should come together into lumpy soft ball of dough. Use your hands to briefly knead and then pat into a circle of 2.5cm thickness on a greased baking tray (or cut out round scones like Delia).

Brush top with milk and use a sharp floured knife to score into about 8 wedges (or forget to make any marks like I did). Delia also crumbled some feta on top but I didn’t. Bake for about 15 minutes or until a golden brown. Eat warm, with butter if you need it.

On the Stereo:
Love and Murder: Seelenlicht