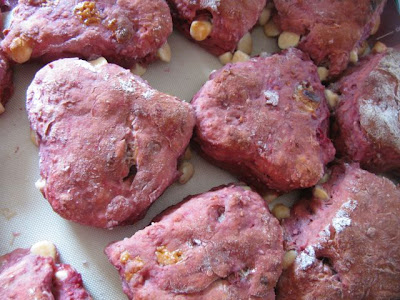 Valentines Day is not a big deal for E and me but we usually acknowledge it in some way. A little card or present. For me, it is an excuse to have fun with cooking. Yesterday I had decided to bake special Valentine raspberry and white chocolate scones before taking Sylvia to swimming lessons. We just made it on time for her lesson but I was glad of the scones so I could leave a little treat for E at home and take some to my parents. 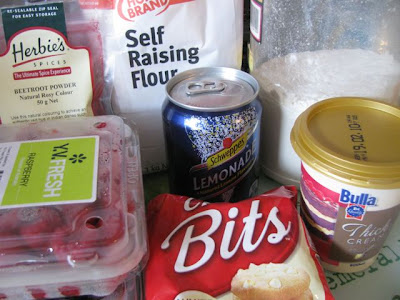 I was delighted to find a recipe for raspberry and white chocolate scones that used cream and lemonade as I had another tub of cream in the fridge that needed using pronto. I had also decided to use some of my beetroot powder to make the scones pink and my heart shaped cookie cutters. After all, Valentines Day is the day for pink hearts. 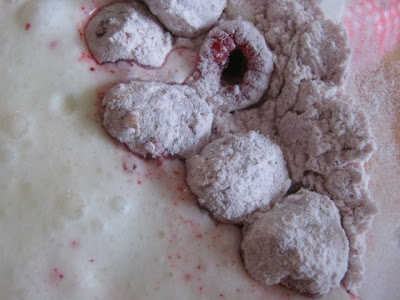 I had fun tossing the raspberries in the flour mixture but regretted it later when they collapsed a bit because I had not put them in toward the end of the mixing the dough. 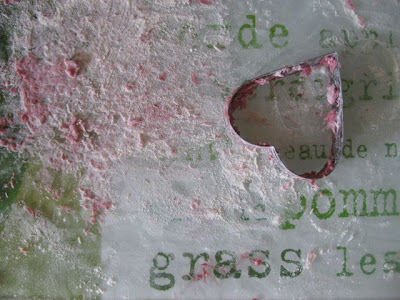 Cutting out the scones was tricky work because the dough was so sticky. I was going to take a photo of the dough laid out while I was doing this but I had too much muck on my fingers to even pick up the camera, and I was racing to get this done before going out to the pool. But you can see it made a mess of my cookie cutter and the chopping board that I use for kneading and cutting dough. 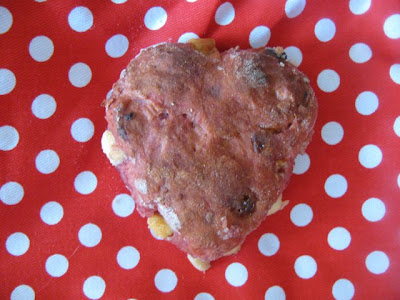 I didn't have time to brush the scones with a milk glaze as I usually do but I don't think it would have helped these brutish hearts. The scones came out of the oven looking less than pretty but tasted fantastic. Soft and pink, they weren't that sweet but for the white chocolate chips. It was probably just as well that we had to take Sylvia to swimming lessons or I might have been tempted to eat my way through the whole batch. Although that would have been some feat as the mixture made quite a few scones. 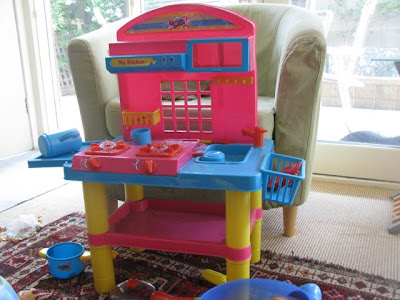 Instead Sylvia and I had a splash in the pool while E looked on. Afterwards we left E to go for a coffee at Andre's and we drove to visit my mum and dad. When we arrived, they were just finishing lunch with my dad's cousins and there was a fruit platter and orange cake on the table. Sylvia had a lovely time on my dad's lap eating grapes and pineapple. The cousins left and we had a late lunch. Then Susie arrived with her three girls and some delicious gluten free grubs that she had made with Arnotts rice cookie. Sylvia and Ella had fun playing with this little kitchen set. 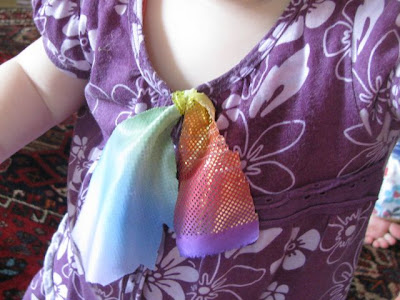 The little girls were also into their crafting. My mum bought them some lengths of shiny coloured material. They had lots of fun making it into belts and hair scarfs. Maddy even cut a little piece off for Sylvia. E thought she looked like she had on a cravat (just like Matt Preston) when she got home. 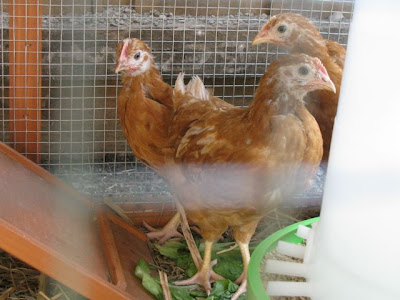 However the great excitment was the new chickens that arrived yesterday to live in my mum's new hen house. There are four young ones and my mum had told my four nieces that they can name a chicken each. It was not easy to get a photo through the wire, especially with the four of them being scatty as anything. (I was going to say running about like headless chooks but that might be a bit insenstive!) They are still very young but Maddy, Grace and Ella thought they had already grown over night. I am sure they will be producing eggs in no time.

As for the scones, I got them out for afternoon tea. Both my mum and dad refused to try them without butter - they are so stuck in their ways - but loved them buttered. Maddy and Ella told me that they don't't like scones. I thought they were great on their own. E ate them plain like me until he was led astray by the bad example of my mum and dad. Even Sylvia enjoyed cramming a corner into her mouth. I had one with my lunch today and it was still good. I have never thought of using the lemonade and cream scone recipe to make flavoured scones but there's no looking back now.

Raspberry and White Chocolate Scones
Adapted from Michelle Cake Designs
Makes about 16-20
Heat oven to 210 c. Grease a large baking tray or two small ones or use silicone non-stick mats to line tray(s).

Sift flour, beetroot powder (if using) and salt into a large mixing bowl. Mix in white choc chips. Mix the cream and lemonade together in a small to medium bowl - watch for the lemonade frothing up. Mix lemonade mixture into the flour and when it is almost mixed add in the raspberries. (I mixed my raspberries in before adding the liquid and it is not advisable if you want them to stay together.) I used a knife to mix to keep the mixture as light as possible.

Using well floured hands scrape the dough onto a floured surface. The dough will be very sticky. Knead briefly and then pat out into a circle of about 2cm thickness. Use a floured scone cutter to cut out (or pat circle onto a greased baking tray and marke wedges with a sharp floured knife). I found the dough very sticky to cut out and handle.

Bake for about 20 minutes until golden brown on top and sound hollow when the bottom is tapped. Remove from tray and wrap in a clean tea towel until ready to eat. Best eaten warm or duing the day of baking but will be good the next day too. Good enough to eat plain or you can butter them or serve with cream and jam if desired.

On the Stereo:
ELO: the Collection: ELO
Posted by Johanna GGG at 22:00