Baking: the good the bad and the healthy 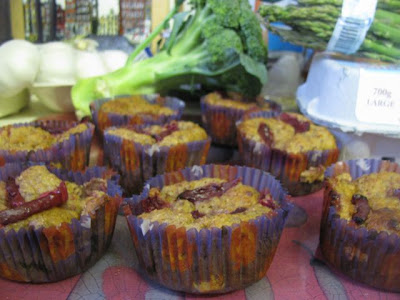 Yet again time is short but I have an abundance of good food to share. I have been baking a lot lately because I need it on for so many reasons - to feed Sylvia healthy baked goods, to use up fruit that is on the edge, to comfort myself when work is stressful, and because I love it. So today I will give you two healthy baby muffin recipes full of fruit and an indulgent chocolate cake because we can't always be as healthy as we would like. 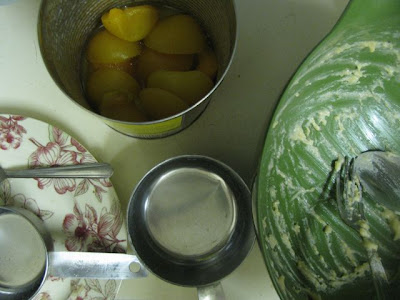 I shall start with the gluten free vegan apricot muffins that I made last week. When Sylvia started on solids, my sister in law Erica lent me a baby food cookbook that my sister Susie had lent her. One of the first recipes that caught my eye was a simple recipe for Gluten Free Apricot Muffins. It had a cup of rice flour and a cup of soy flour. These are flours that I can easily rustle up in my pantry. Plus, I had a tin of stewed apricots in juice that had been in my cupboard for quite some time. 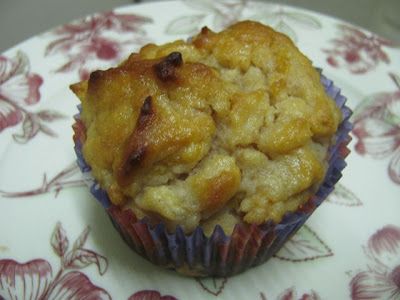 I decided that I would substitute bananas for eggs so they would be vegan as well as gluten free. When I tasted the batter before cooking them I was a bit concerned that it tasted rubbish. However when they came out of the oven I was pleased with the results. Not very sweet but soft and full of flavour. They tasted particularly good with cream cheese and plum jam. 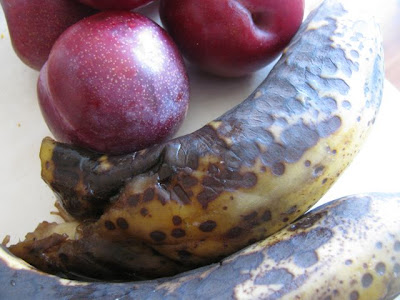 On a roll with vegan muffins, I found some very manky bananas and irresistable blood plums at CERES market. Blood plums have a special place in my heart. They are the only plums I remember eating in my childhood but they never taste as good now and they did then. On the same day I bought them, I decided to bake them in muffins in the short period of spare time while waiting to catch up with a friend. I don't think the bananas would have lasted much longer. They were even going to mush in my bag. 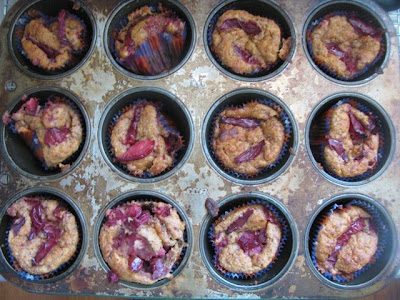 I adjusted a recipe from Tofu for Two and found the hard way that my muffins were taking a lot longer than Anni's to bake. I had a quick look at the muffins when I was ready to leave. Close enough for jazz, I thought, but when I tipped them out onto a wire rack to cool they collapsed. I put them back in the muffin tins, turned off the oven and ran out the door. When I returned they still looked sunked. E said they looked like they had been punched. But they tasted good, if not very sweet. However, I thought the recipe needed some tweaking because it was so moist. 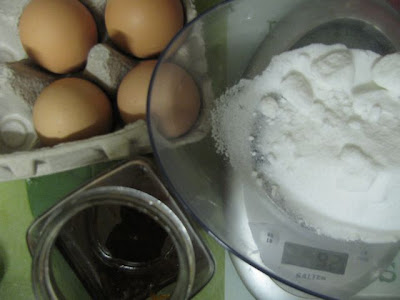 After all my virtuous cooking, I needed to indulge in some sugar, eggs and butter. Oh yes, and some chocolate would be very nice! I blame returning to work in an organisation that is in refunding chaos. I had made Nigella's Store Cupboard Chocolate Orange Cake from How to be a Domestic Goddess some year's back for the ex of one of my sisters. It lingered in my memory as a pleasant cake. So when my mum gave me some of her runny marmalade months ago I planned to make the cake. 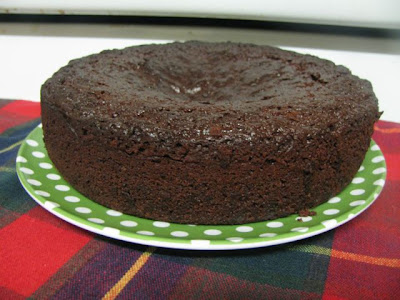 As often happens, it took me a long time till I finally made it. Rather than making it for a social gathering as I planned, I made it because I needed chocolate and we were out of any dairy. Every recipe needed milk or buttermilk or yogurt. This was dairy-free. Unfortunately I didn't have quite enough marmalade. But in the spirit of emptying my store cupboard I topped it up with a little honey. My chocolate was also not the finest quality. So when the cake came out of the oven and tasted merely ordinary, I blamed my ingredients. 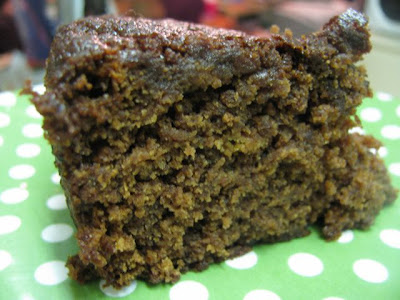 The next day, I found that it was my impatience that had been the culprit. After resting, the cake was as lovely as I remembered it. Dense and moist with a slight citrussy bitterness and the odd chewy piece of rind from the marmalade. It wasn't the prettiest of cakes when sliced but kept very well in my lunchbox and was a happy spot in my day when everything else was seeming a bit hopeless. 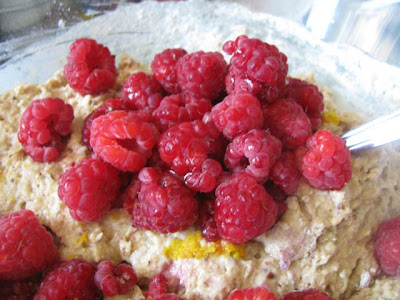 Sated with my chocolate cake, I decided to return to some healthier baking for Sylvia this week. I had bought raspberries on special and decided to try them in the plum muffin recipe. I added more flour and reduced the Sylvia on floor with muffin papers, rice crackers. They were fantastic.
The chocolate cake was not really baby food but I made the muffins specially for Sylvia. My mum says she shouldn't have too much sweet food, which is why I have really reduced the sugar in these recipes. However I quite enjoy having my muffins fruit sweetened rather than by refined sugar. 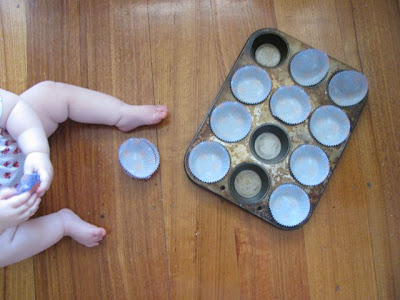 Sylvia has loved these muffins. She stuffs them into her mouth with delight. So you would think she would make it easy for me to bake for her. Oh no! I have her clinging to my legs so it is hard to get to the pantry and when I do open the pantry she is straight into it and pulling out anything she can. When making the plum muffins, I had to hold her while I spooned the batter into the muffins papers. She was even more grizzly when I made the raspberry muffins and the only way I could get her out of my hair to bake was to put her on the floor with the muffin tray, papers and some of her rice cakes. Fortunately they don't take long to whip up a batch. 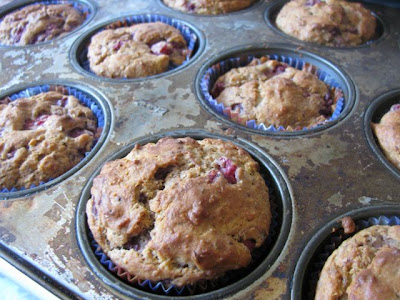 Finally I noticed that Srivalli is holding an event called Kid's Delight and the theme this month is Wholesome Snacks. I really like the banana and raspberry muffin combination so I am sending this to Srivalli as I am sure she will enjoy it too. But I am going to be trying other fruits with banana in this recipe and I would be interested to hear from anyone else who does.

Melt butter in large saucepan. When butter is just about melted add choc chips and stir over low heat until just melted. Add marmalade, honey, sugar, salt and eggs. Stir until amalgamated. Then gradually stir in flour until mixed in.

Pour into prepared cake tin. Bake for about 50 minutes or until a skewer inserted in the middle comes out cleanly.

Preheat oven to 160 C and grease or place paper liners in muffins tin.

Drain apricots, reserving 1 cup of juice. Roughly chop apricots (I used kitchen scissors) and gently mix with flours, baking powder, and cinnamon. In a small bowl use a fork to lightly whisk together apricot juice, oil, buttermilk and egg. Pour into the apricot and flour mixture and gently mix until just combined. Spoon into muffins cups and bake for 30 minutes or until golden brown and a skewer inserted into the middle comes out cleanly. Cool on a wire rack.

Preheat oven to 180 C and line muffin tins with paper muffin cups. Mix margarine, banana and flax seeds together in a large mixing bowl, then mix in milk, vinegar, and apple concentrate (and orange zest if using). Leave to stand about 5 minutes for flax seeds to absorb moisture. Add dry ingredients and stir til just mixed. Gently fold in cubed plums or raspberries. Spoon into prepared muffin cups and smooth a little with the back of a spoon. If making plum muffins decorate with plum slices. Bake for about 30 minutes or until golden brown and a skewer inserted in the middle comes out cleanly. Keeps about 3 days.

On the Stereo:
Songs in the Attic: Billy Joel