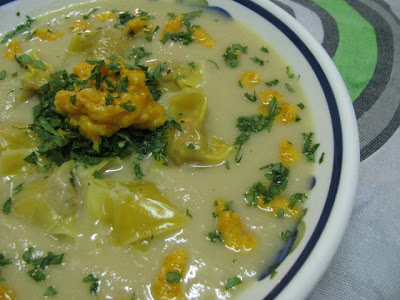 A blog event, a chance meeting with a blogger in the street, a tub of unused cream and a memory of a very good meal in Scotland. What do they all have in common? They were inspiration for a very good meal at home this week.

Firstly I looked in amazement at Jacqueline’s theme of Copycat for this month’s No Croutons Required. This monthly blog event hosted by Lisa and Jacqueline focuses on soups and salads. I am used to themes like tomato, Indian, legumes. Not emotive themes that take me back to school days and playground rhymes such as this one:


Copy cat from Ballarat,
Went to school and got the strap .
Teacher said it wasn’t fair
Because he lost his underwear.

We would chant this to someone who was copying us at school. Copying was considered cheating rather than a compliment. Fast forward many years to the blogosphere where imitation is seen as the sincerest form of flattery. So much so that it is encouraged by blog events. 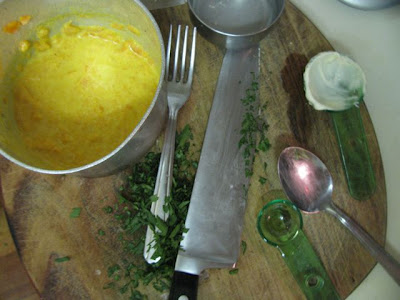 But Jacqueline was not just suggesting any sort of copying. Rather she was asking us to make a dish based on one from a favourite restaurant. Initially I couldn’t think of a meal I wanted to copy. Then I decided to think laterally. Jacqueline had suggested checking out menus online at favourite restaurants. The one I first thought of was David Bann, the wonderful vegetarian restaurant I visited in November on my trip to Scotland. I have already written about my visit.

So I went back to Bann’s menu online expecting to see ‘soup of the day’. I was delighted to see a dish called ‘Walnut tortellini and parsnip soup’. It even had a description: ‘Homemade pasta filled with toasted walnut and our own cheese curd, served with a lightly spiced parsnip soup and carrot puree’. I looked no further. This sounded wonderful. This would get me out of my soup rut. 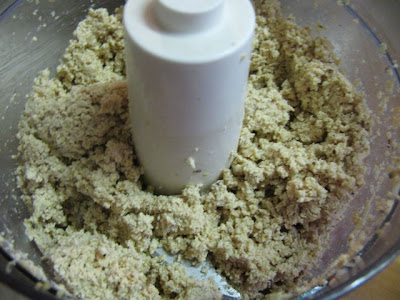 Unfortunately I am not good at copying any recipe to the letter. I only looked at the website once before I wrote up this post. By the time I made it, the soup had morphed in my head. I didn’t know what David Bann’s soup looked like and by the time I finished I am not sure it was anything like it. However, it was fantastic inspiration. 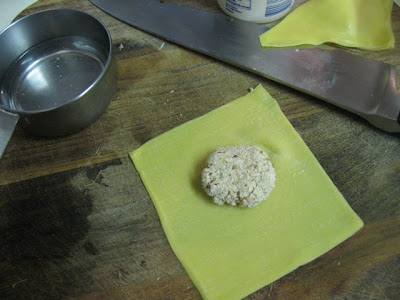 Having eaten at Bann’s I thought it would be a rich and substantial soup. I then looked to my kitchen for further ideas. I had cream that I had bought for my birthday cake which was never used and suddenly had the useby date looming. We didn’t have any white wine but we had whisky, which seemed right for a Scottish soup. I wasn’t sure exactly what was meant by curd cheese. A chance meeting with Lisa found us talking about substituting tofu for cottage cheese in my favourite nut roast like Cindy had in her wonderful vegan sausage rolls. That made me think I should try using the tofu that was in my fridge rather than buying more food. 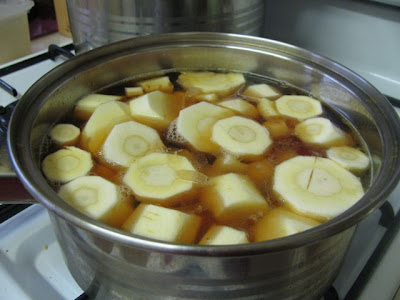 I decided it needed good home made stock and luckily I had some frozen vegetable scraps to make freezer stock. I was a bit heavy handed with the salt and was concerned that the addition of beetroot would make it too dark for the creamy colour of the parsnips but this wasn’t a problem, especially with the cream helping to lighten the colour.

I made this on my day at home while waiting for a tradesperson who never arrived. Though the bulk of the work happened once E was home from work while he watched Inspector Rex and Sylvia teased Zinc with a coathanger. (Ah domestic bliss!) As always dinner took longer than usual. The first night it tasted lovely but the ravioli were large and unwieldy and the presentation wasn’t up to scratch for fine dining in a restaurant. 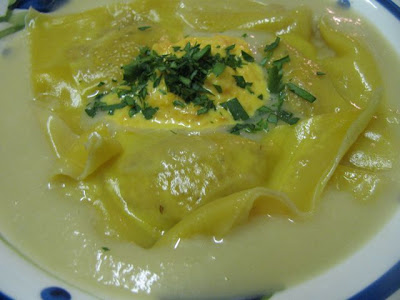 To my delight, we had leftovers. Happily this fell on pasta night. (This week we managed a corny cottage cheese on toast with salad on pizza/bread night on Monday because I forgot to defrost the pizza dough, then salad and pudla on salad/soup night on Tuesday but on Friday yet again, I didn’t manage a rice night.) 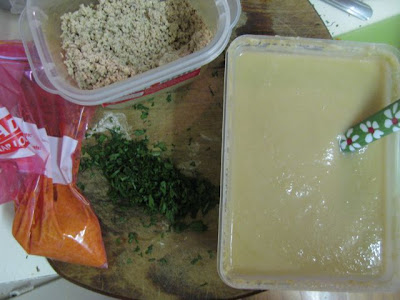 I was even more pleased to have leftovers when Melbourne had storms on Thursday and it took a long time to drive Sylvia home from childcare. She had eaten her Mediterranean pasta bake for lunch so I gave her a simple dinner and sat beside her making up more ravioli. With less time needed to prepare dinner I could put a bit more effort into presentation. I decided to cut the wonton wrappers in half so they were smaller. I put the carrot cream into a ziplock bag and snipped off the end so I could pipe it into the dinner. Sylvia didn't eat any but was eager to help photograph it. 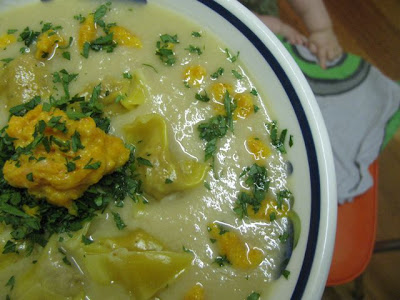 E thought the soup a bit thin but I loved this meal. As always, it is a great thing when a blog event challenges me to go outside my comfort zone and try something new. The key to the soup was generosity with honey, salt and cream, which seemed just what I would expect from a restaurant meal. Next time I would use less parsley but I needed some green with dinner. I think you could probably do without cream, use a different sweetener and some tofu to make it vegan. The ravioli were quite tasty and would give a simpler soup lots of flavour. However I would like to think that David Bann would have been proud of my version of his soup.

To make soup: Fry onion in olive oil over medium heat in a large saucepan until they are golden brown (about 5 minutes). Deglaze with whisky (ie stir whisky into the onions till they absorb all the liquid – it will be quick). Add parsnip, honey, and stock. Check seasoning. My stock was very salty so I watered it down with the 2 cups of water but if your stock was less intense you might substitute some more stock for water. Bring to the boil and simmer for about 30 minutes until the parsnips are soft and tender. Add cream and blend with a hand held blender. While the soup is simmering, make the ravioli and carrot cream.

To make the ravioli: Place all ingredients except wonton wrappers in the food processor and blend. On a clean surface, place a wonton wrapper and cut in half. Roll a small ball of the walnut mixture and place in the middle of a half of the wrapper. Don’t make it too big or it will ooze out the sides. Have a small bowl of water to dip fingers or pastry brush into to dampen the edges of the wrapper. Fold in half and pinch edges together. Repeat with other half of wrapper and then with remaining wrappers. Have a large saucepan of boiling water and drop ravioli in. Cook in water for about 4-5 minutes. (On the first night I cooked ravioli in the simmering soup but the second night I just used some salted water.) Remove with a slotted spoon and set aside in a colander or on a plate.

To make carrot cream: Cook the carrots till very soft. (I peeled and thinly sliced mine – then I put them in a little water for 2 minutes in the microwave and then cooked them in salted water on the stovetop for another 10-15 minutes.). Mash with a fork and stir in honey and cream.

To assemble: Ladle some soup into a pasta bowl. Arrange ravioli in the bowl. Drizzle carrot cream over (I put mine into a plastic zip lock bag and snipped the corner off to pipe it into the soup). Then scatter with parsley.

On the stereo:
Beauty reaps the blood of solitude: Nature and Organisation