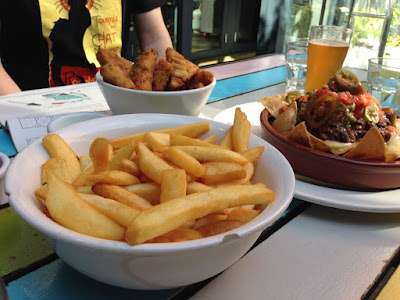 For some years I have been aware of the Cornish Arms pub in Brunswick as a vegan friendly pub but it was only last year I finally got there for a meal.  I had been there for a Barb Waters gig years ago but that was before their famed vegan menu.  I think that their heavy emphasis on mock meat was one thing that made me take my time.  However I have been there quite a few times since and while I have sampled a few mock meat dishes, I have been pleased that there are plenty of other vegan options. 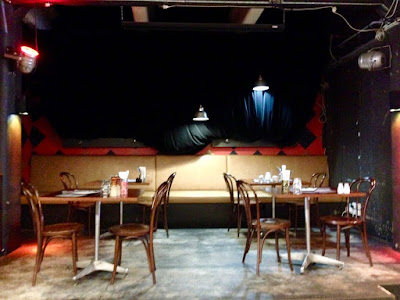 The pub is large with lots of seating inside, a roomy beer garden and a rooftop bar.  When I last visited last week there were christmas parties inside and it still felt like there was lots of room.  I am not so keen on the ambiance of the black decor inside but it is the cool option on a warm day. 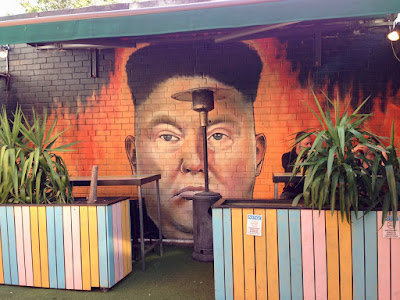 If it is a nice day, the beer garden is lovely with its quirky artwork.  I haven't eaten upstairs - but would like to as they have wood fired pizza up there and a great view of Sydney Road. 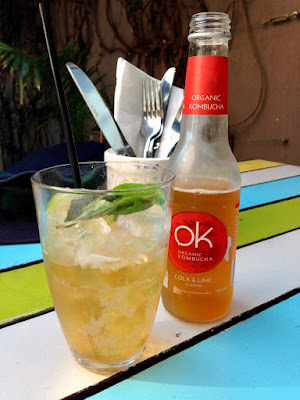 Traditionally pubs have not offered much if you are not after alcohol.  (The pub where we had our work Christmas party last week was typical with not much more than coke, lemonade, ginger ale and lemon, lime and bitters.)  I love the the Cornish Arms has kombucha and a mocktails menu.  On my first visit I had this very nice OK cola and lime kombucha.  Since then I think the kombucha option has been Remedy. 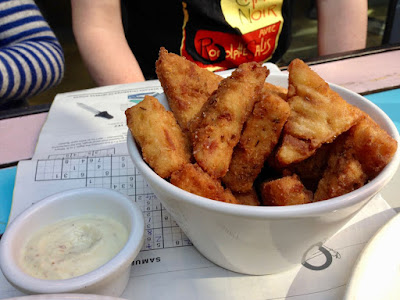 I was there with Sylvia and E so we chose a few dishes from the snacks menu to share: bowl of chips, vegan fried mac n cheese with bacon bites, and macho nachos (see top photo).  I really liked the cheesy nachos with a generous topping of blackbean chilli, sourcream, guacamole, jalapenos, corn salsa and hot sauce.  It was spicy but not too hot for me.  I didn't get the vegan option but it is available. 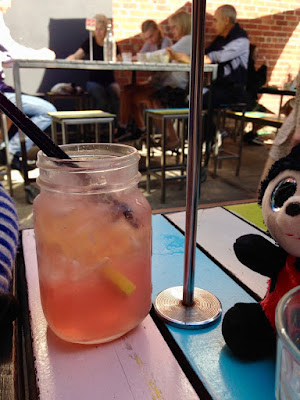 The vegan mac n cheese bites were lovely with vegan cheese and facon served with aioli.  Sylvia was a fan.  However it was a big serving and we found the bacon a bit intense after a while.

Sylvia also had a home made pink lemonade that she really loved. 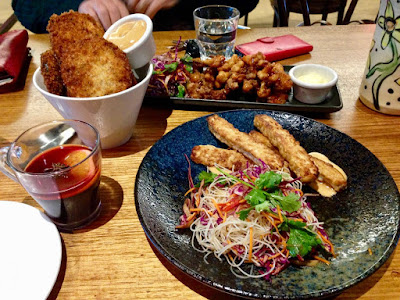 My next visit was with my mum.  We ordered the fried tempeh salad and Vietnamese inspired noodle and greens salad with a peanut dressing, the korean fried cauliflower with a chilli sauce and aioli, and the eggplant chips with chipotle aioli.  I also had a mulled wine which I enjoyed on a winter day but found rather strong.  The cauliflower was amazing.  Crunchy though a bit spicy.  The eggplants chips were nice but were really round fritters rather than chips which should be long and thin.  The whole meal was a lot of fried food and felt quite heavy. 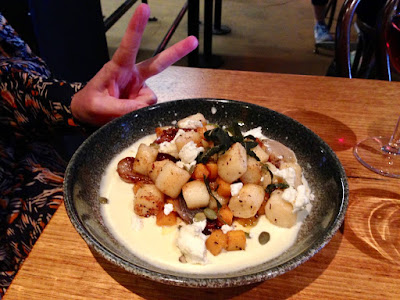 Then I went with a friend Sarah who had the house-made potato gnocchi, pan-fried with butternut pumpkin, shallots, goat's feta and sage.  It looked even better than it sounded and Sarah enjoyed it. 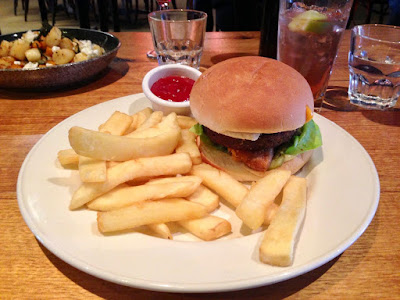 On that occasion I finally tried the Vegan Royale with Cheez.  It is a local VEEF patty, deep fried american cheddar cheez, pickles, lettuce, facon, ranch sauce and ketchup and is served with a side of chips.  I really enjoyed this burger.  I could eat it with my hands.  The name seems an allusion to Pulp Fiction where they discuss a McDonalds Quarter Pounder being called a Royale with Cheese.  I've never watched the film and am not sure I ever had a Quarter Pounder in my meat eating days.  But it still gave me a nostalgic feeling for meat burgers that I had occasionally as a kid, even though it is now decades since I went vegetarian. 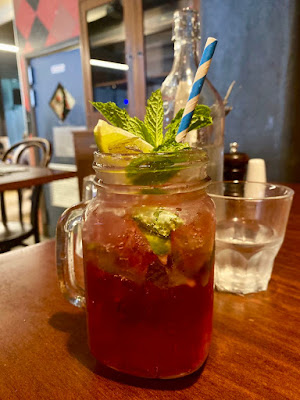 Most recently I went there for lunch with Faye last week.  Luckily it wasn't on one of the ridiculously hot days we had.  Just a normal hot day of 30 C.  Which was still had me gasping for a drink after riding my bike there.  I tried the Blackberry Fizz and it was wonderful and refreshing.  I asked what was in it and was told blackberry juice, lemonade, lemon juice, lime juice and served with mint leaves. 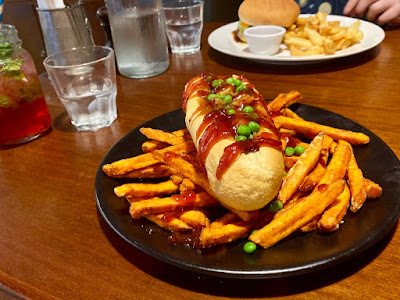 The reason we had chosen the Cornish Arms for lunch was that this year it is holding a 12 Days of Vegan Christmas.  I was pretty excited about a vegan Christmas special.  On the day we were there the special was the roast seitan and gravy rolls with sweet potato fries.  The bread roll had roast seitan, potato, carrot, peas, gravy and cranberry sauce.  This was not quite my family's traditional Christmas and I am not a big fan of seitan but I enjoyed it.  I could have done with less gravy in the roll but the star of the show for me was sweet potato fries with cranberry sauce.  They were amazing. 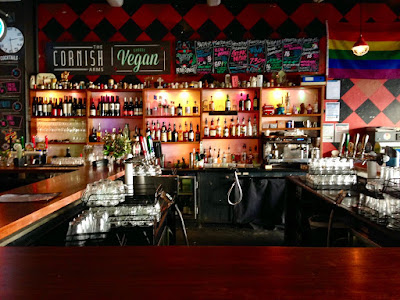 So I am glad to be making up for lost time with the Cornish Arms.  This is not for health freaks.  The food is traditional pub grub with lots chips and frying.  It is not something I would want to eat too regularly but once in a while it is a nice treat and a good reliable place to eat.  I love that they are seasonal in having food to celebrate occasions as well as a good mocktails menu.  If only I had the time to fit in one more 12 days of vegan Christmas meal!

The Cornish Arms
163A Sydney Road, Brunswick, 3056
www.cornisharms.com.au
Open 7 days a week for lunch and dinner