In My Kitchen: December 2019 and changes 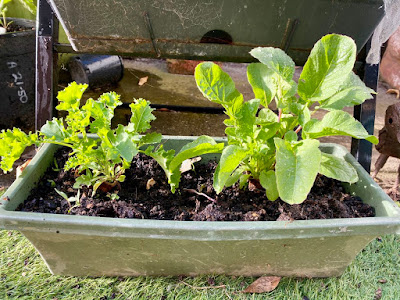 When Sylvia got up on 1 December and started to put out some Christmas decorations, I was in deep denial it was so late in the year.  I still am!  The mild weather does not help (after some soaring temperatures) and the terrible bushfires in NSW and Queensland seem far away.  And there has been so much change that I can barely keep up with my life.  The main change in my kitchen is one less mouth to feed due to E and I separating recently.  And as a result there has been a lot of upheaval and tiredness in adjusting to change.  Within weeks I have had a new phone, a new fridge, a computer out of order, a first (secondhand) phone for our 10 year old, and a 7 week saga of getting the new NBN wifi network at home. (At the same time as dealing with new computer, new office and new colleagues at work.)  Lots of endings and beginnings.

Above is a photo of of kale and radishes from the garden.  We planted them with Woolworth's seed giveaway.  The great thing about the garden is that it is always in a state of constant change, reminding us that change is what nature intends.  My problem with gardens is still to work out the right moment for harvest.  When do we see enough of the little radishes poking above the earth.  When is the kale leaves right to eat?  The only answer is experience. See below for the radish harvest! 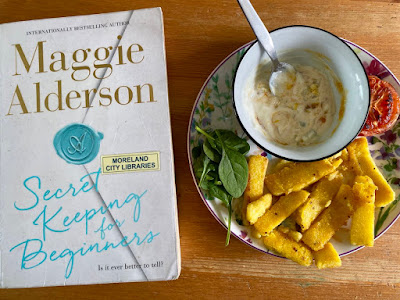 These polenta chips were inspired by VegHog and were delicious with roast tomato, baby spinach and a relish and aioli dipping sauce.  The book by Maggie Alderson was light and easy reading.  However I can highly recommend my current book, The Night Circus by Erin Morgenstern which I am finding fascinating. 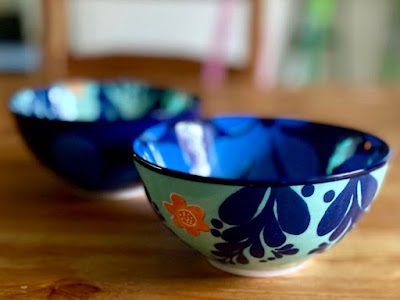 These are new bowls because we really love our small bowls but they have been breaking and my kitchen has had some walk-outs with E leaving. 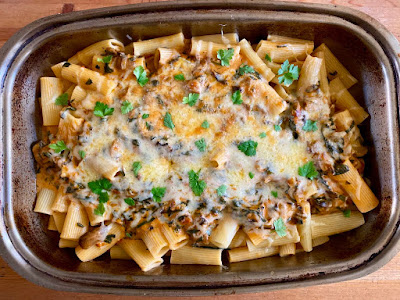 Fortunately E and I still get along.  I invited him over for tea but my cooking mojo has been a little low.  I made a vegetarian straganoff pasta bake with mushrooms and spinach which was disappointing.  Perhaps too much tweaking the recipe.  The flavours just weren't right.  I rescued some by adding it to a pumpkin and lentil soup. 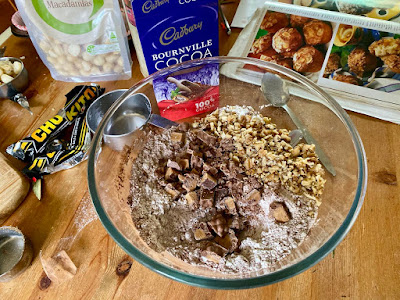 Another kitchen fail were the cupcakes I made to eat for dessert after the straganoff pasta bake!  Oops!  I took a recipe for mars bar and brazil nut cupcakes.  I decided to make an Aussie version with Chokitos and macadamia nuts.  I was surprised to find the nuts were raw and so I used walnuts instead.  The cupcakes were just too dry! 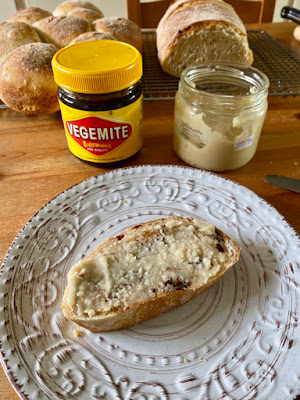 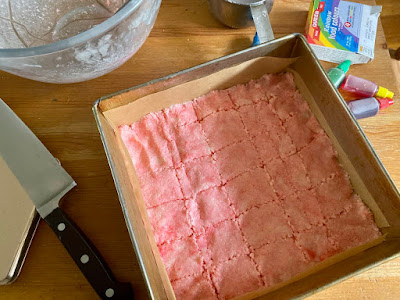 Another weird kitchen experience was making coconut ice.  It was actually part of a school project where Sylvia had to make it for a bake sale but to write up a recipe and work out costings.  She made one batch which kept its colour but then we made another for the cake stall and overnight the pink colouring turned orange!!!! 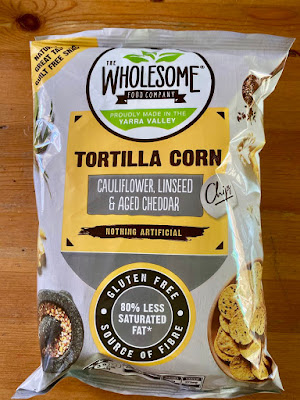 I did a double take when I saw cauliflower as a flavouring for tortilla chips,  I had to taste these Cauilflower, linseed and aged cheddar tortilla corn chips.  They were really nice.  The cauliflower flavouring was there but it was subtle. 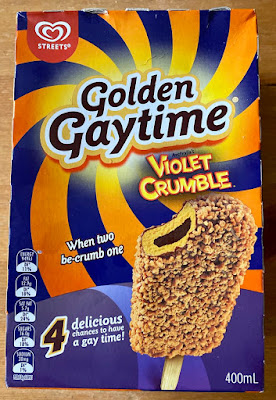 Sylvia thinks that summer should mean always having ice cream in the freezer.  I disagree.  But occasionally there is an ice cream that pushes my buttons.  Golden Gaytimes were my favourite ice cream as a kid and my dad loved Violet Crumbles.  Combining the two in an ice cream made it a double whammy of nostalgia.  It was good but not as amazing as my sentimentality expected.  But it was rather nice during a heatwave a few weeks ago.  It is forecast to be 38 C on Monday so I am bracing myself for more unbearable heat. 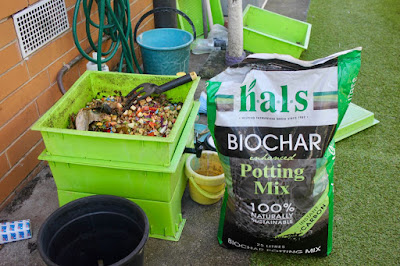 My worm farm has had problems for months.  It has been wet and smelly,  I could not work out if rain was getting in or if it was something else.  I tried some shredded paper, this Biochar potting mix and more newspaper layers on top but it got so wet that my worms all died.  I might have saved them if I had not been so busy and tired that there was a little neglect going on but I just could not get them back on track.  I hope to get my worm farm going again when I have a bit more energy.  Meanwhile it is fantastic that our council is now collecting food scraps with the garden waste so at least my fruit and veg waste is not going to landfill. 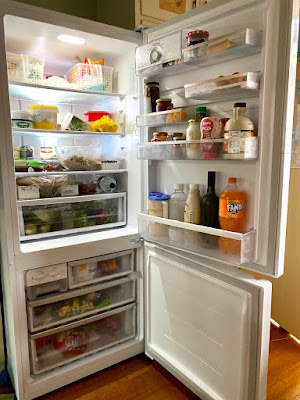 With E moving out, there was some dividing up kitchenware.  My kitchen still seems filled to the brim!  One big change was that he took the fridge so I bought a new one.  I bought a bigger fridge because the old fridge was always so crowded.  Interestingly the freezer and crisper always seem full but it feels like there is always lots of room in the fridge.  Part of me thinks it is a waste of space and part of me loves it when I need to find room for large items such as a drink dispenser. 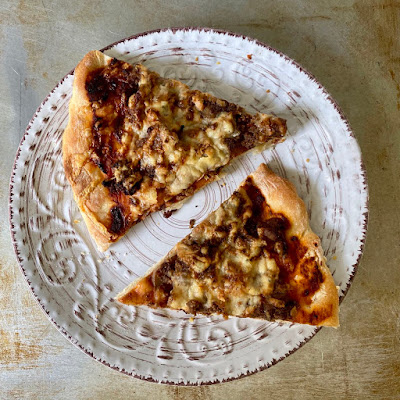 My cooking mojo isn't completely gone.  Last week I made some great vegan stovies (slow cooked potatoes with vegan "mince meat").  They were really good and I will write a post on them.  Today I just show you some stovies pizza which was delicious.  Stay tuned ... 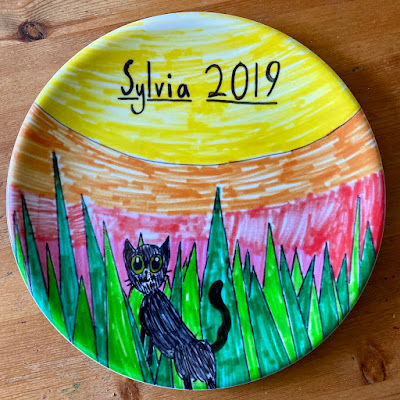 Sylvia made this plate at school.  I think it was a great project to do because this is something we can have around the kitchen that she can feel proud of and which is quite practical. 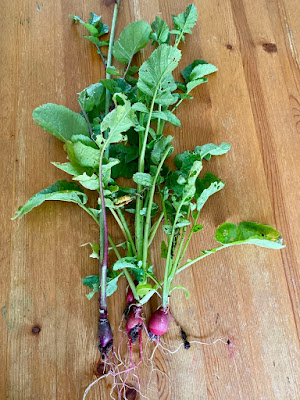 I started the post with a picture of some healthy radishes and kale.  As I mentioned I was unsure when to pick them and left them a bit long.  Here is the radish harvest.  Laugh if you like!  Ironically I don't even really eat radishes.  I have sort of tried and not succeeded.  Maybe one day when I grow up! 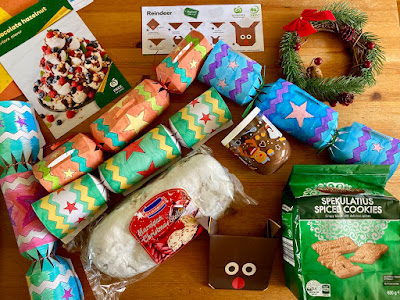 Finally here is a photo of some festive items in my kitchen.  Christmas is now hurtling towards us at an alarming rate.  Last week I started in disbelief when someone told me it was 3 weeks til Christmas.  Sylvia has been doing her craft sessions at the local library and made some bon bons, a wreath and baubles (these are not home yet).  I have bought stollen and spekulatius spice cookies from Adli, and we have bought more nutella jars that become glasses.

I am sure more Christmas will creep into the house soon, especially next weekend when we get our tree.  But for now I am more excited by cherries and summer holidays.

I am sending this post to Sherry of Sherry's Pickings for the In My Kitchen event, that was started by Celia of Fig Jam and Lime Cordial,  If you would like to join in, send your post to Sherry by 13th of the month.  Or just head over to her blog to visit more kitchens.
Posted by Johanna GGG at 23:14