Roast potato and rosemary bread (overnight, no knead and sourdough) 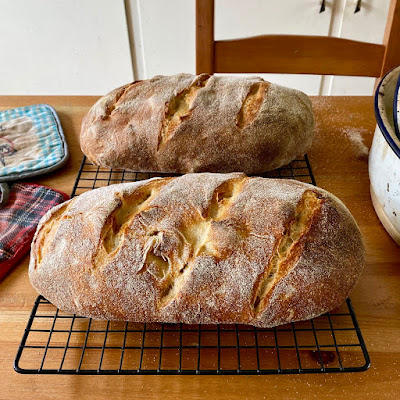 It is a little ironic that I am sharing a recipe for bread at a time when I have absolutely no energy to bake bread.  But this recipe is too good to let linger in draft form in my folder.  It came about at the Farmers Market when Sylvia really wanted me to buy a loaf of potato and rosemary bread.  I could make it at home, I promised.  And so I did. 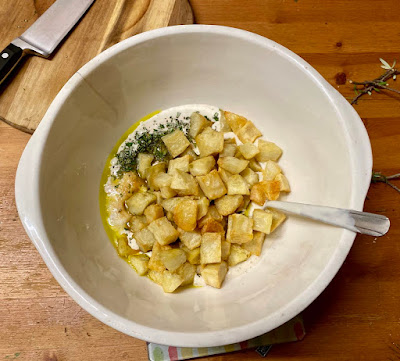 I asked the stallholder how they cooked their potato but I forgot what they said.  No doubt, this was partly because I already had decided to roast the potatoes.  Roast potatoes are food of the gods!  They take a little time but once I am eating them I never resent that time.  I only wonder why I don't make them more often.  These potatoes were perfectly golden brown with that rustle that comes with lovely crisp potatoes. 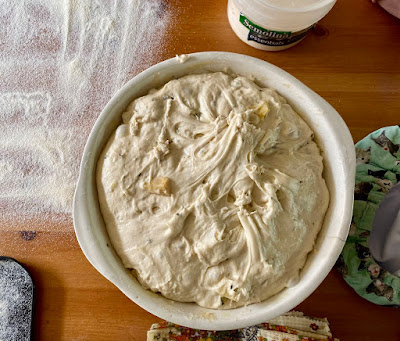 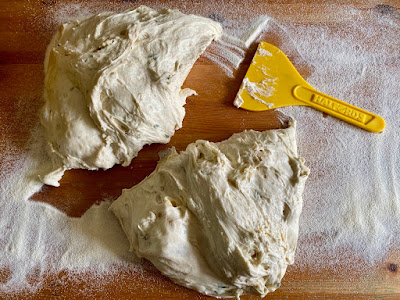 The amount of potatoes in the mixture was based on what was left in the cupboard.  It seemed about right.  I quite liked how the dough had lumps in it, to show the potato lurking under the surface.  It made it look a little rustic and a little interesting. 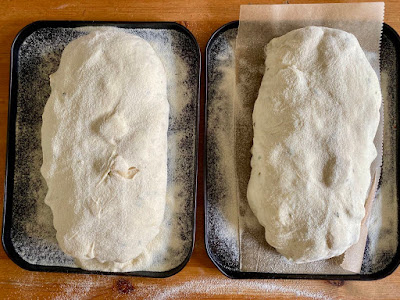 When the bread came out of the oven we just had enough patience to wait about an hour before slicing into it.  It was magnificent with that herby rosemary aroma and chunks of potato when we sliced it open.  We could have inhaled a loaf, it was so good but we managed to stop! 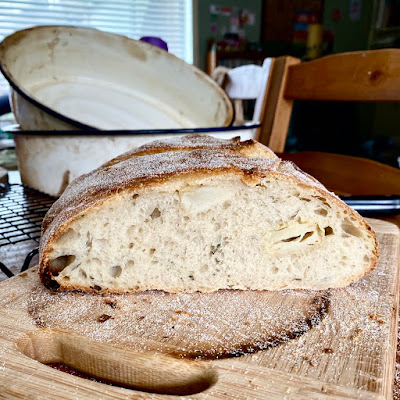 Sadly the loaf is all gone and we only have shop brought bread this week.  On top of the Christmas festivities, this week I had a very busy three day workshop at work that has totally drained me with long hours and lots of meeting up with colleagues.  Thank goodness that is over for another year.

Only a week until my summer holidays start and then I have should have more energy for bread baking.  I just hope the weather is kind to us.  It is forecast to be in the 30s for most of next week and 41 C on Friday.  But I am grateful for our weather after meeting with Sydney colleagues this week who were so happy to be in Melbourne and away from the smoky atmosphere of Sydney with the terrible bushfires so close.  Let's just hope we have more weather that is kind to bakers than weather that kind of bakes us!

While the sourdough bubbles away, prepare the potatoes.  Peel them and chop into large dice.  Bring to the boil in salted water for 10 minutes.  Check potatoes.  They should be keeping their shape but cooked through even if not quite soft.  Toss in a roasting dish with a little oil and roast at 200 C for about 30 to 40 minutes until golden brown and crisp on the outside and soft inside.  Cool.

About an hour before going to bed (or first thing in the morning) mix everything together.  It is easiest to mix starter, water, salt, oil and rosemary first, then potatoes and then flour.  Once the potato is in, stir very gently so you don't crush the potato.  Use hands to mix if required.  Set aside covered with a tea towel for half an hour.  Knead in the bowl for about 15 seconds.  Cover with greased clingwrap or a bowl cover and leave at room temperature for 8 to 12 hours.

Scrape dough out onto a lightly floured board.  Shape into a loaves (or cut and shape into rolls - if doing rolls I let them rise in the casserole as they don't need much in the way of slashing but slashing loaves is hard in the casserole dish.)  Place on a floured surface and cover with the lightly greased clingwrap or beeswax.  (I used semolina to dust the surface here.)  Set aside to rise for 30 minutes.  While the loaves rise, preheat oven to 240 C.  I use enamel casserole dishes and don't heat them but used to heat them when I used ceramic casseroles.

Slash the loaves and put in the heated casserole dishes with lids on (or on a tray or in a tin).  Bake for 20 minutes with lid (or foil cover) on.  Remove lid/foil and bake another 20 minutes.  Bread is ready if it sounds hollow when tapped.  If needed, return to oven for another 5-10 minutes to make sure the crust is crispy and sounds hollow.  Cool on a wire rack for at least an hour before slicing.

On the Stereo:
Tigerlily: Natalie Merchant
Posted by Johanna GGG at 22:13