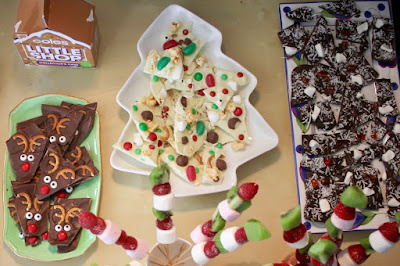 Leading up to our Christmas in July lunch this year we were busy, tired and could not decide what to make.  Chocolate bark seemed an easy idea.  Narrowing it down not so easy.  And it was not quite as straightforward as it looks. However we were very happy with the three types of chocolate bark we made: White Christmas, Rudolph the Red Nosed Reindeer and Lamington. 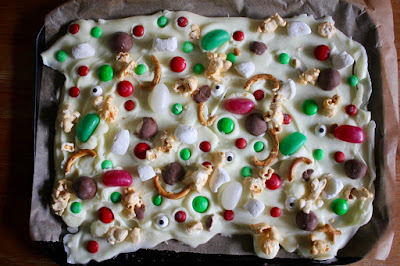 The White Christmas bark was Sylvia's choice.  This is one to appeal to kids.  I found the white chocolate too sweet but I loved all the variety in the toppings: m&ms, jelly beans, caramel popcorn, pretzels, maltesers, candy eyes, marshmallow.  It was a lot harder to put the toppings on than I expected because our chocolate set rather quickly.  We meant to add sprinkles but were too slow. 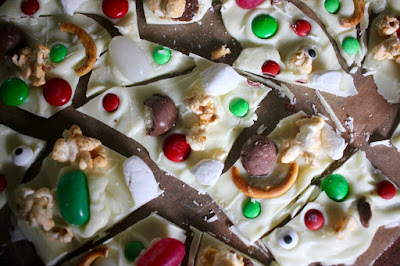 The best thing about this bark was that it was easy to cut.  It didn't matter how it cracked once I pressed down with the knife.  In fact, I loved all the interesting shapes. 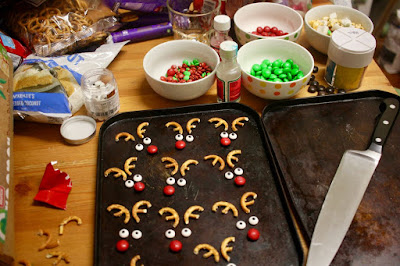 If only the same was true about cutting up the Rudolph the Reindeer chocolate bark.  This was the hardest of the three.  I started it with cutting up the pretzels into reindeer ears.  That was a hit and miss exercise.  Then I laid out my reindeers so I had them ready for when we had the chocolate. 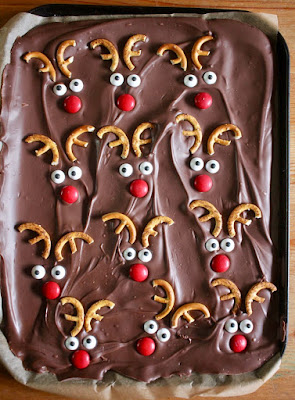 Thanks to our preparation, we got the faces into the chocolate nice and quickly before it set.

Cutting up the reindeer faces sounded easy but was anything but.  While some slice up just the right way, others cracked right through the face.  I ended up keeping the jigsaw pieces of the broken faces, melting more chocolate to spread on some paper, rearranging the pieces and having another go at cutting them out. 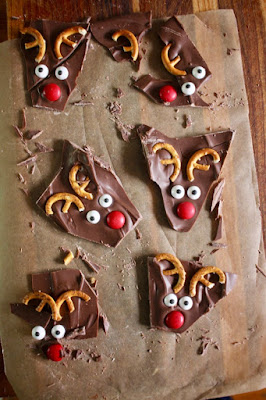 As you can see, most of the reindeer faces worked but some had scars of earlier breaks and there was the occasional one eyed gunner.  I liked these better than the white chocolate but the milk chocolate was still rather sweet. 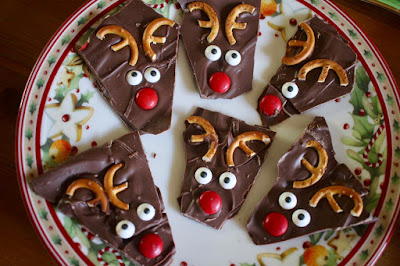 The Lamington chocolate bark was my favourite.  You may be wondering if lamingtons are Christmassy.  No, not at all.  But we noticed that we were holding Christmas in July on National Lamington Day, so it seemed fitting.  And I love chocolate and coconut at any time of year. 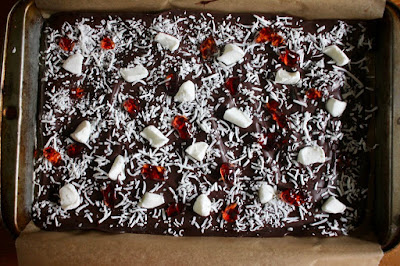 We used dark chocolate melts.  I also added drops of quince jelly, made by my mum.  My name often served us lamingtons (from a shop) and they always had jam in them.  The chunks of marshmallow were for a bit of colour and textural contrast.  I am not sure they are necessary but it was hard to think what else to add.  The main problem with this bark was that the jelly was a little sticky so they were hard to stack and pack. 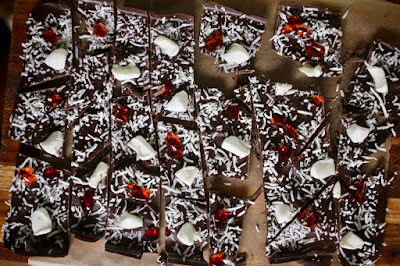 I was not brave enough to use good chocolate because I am no expert at tempering but this would make it much nicer. There is a lot of advice about tempering chocolate for bark that I need to draw on.

The chocolate bark was nice to sit and snack on at the end of the meal.  As usual, the kids finished their meal first, scoffed some bark and then rushed outside.  I would definitely try this at Christmas time for gifts.  It is quick and looks rather impressive with not too much work.

Firstly have toppings ready to go because once the chocolate melts, you will need to work fast.  Then line a medium baking tray with baking paper.

Melt chocolate in the microwave.  (If you decided to use good chocolate instead of melts, the advice I have seen is to melt 2/3 of the chocolate until all chocolate is melted and then add the remaining third to bring down the temperature - to about 89-90 F or 31-32 C).

Spread it over lined tray.  Quickly scatter with toppings and press gently into the chocolate.  Cool and allow at least 12 hours (overnight) to set.  I did this in the fridge but have seen some advice to avoid the fridge if possible.

Once chocolate is set, cut with a clean knife (I had to clean my knife a few times while cutting).  It is easiest to let the cracks go where they will.  If you need particulate shapes, a warmed knife will help (and bringing the chocolate to room temperature).

NOTES: We used three chocolates so we started with the white chocolate, used a silicone spatula to scrape it out well and then melted the milk chocolate in the bowl without washing it.  We scraped out the milk chocolate likewise and melted the dark chocolate in the same bowl.  A few bits and piece fell off the white bark.  I tried running a spoon until boiling water, drying it well and then pressing on the place til it melted and pressing the piece of topping back on.  It worked in a limited way.  When some of the reindeer faces cracked we spread more melted chocolate on the baking paper and rearranged pieces of faces on the melted chocolate.

On the Stereo:
Curiouser: Kate Miller Heidke
Posted by Johanna GGG at 22:36