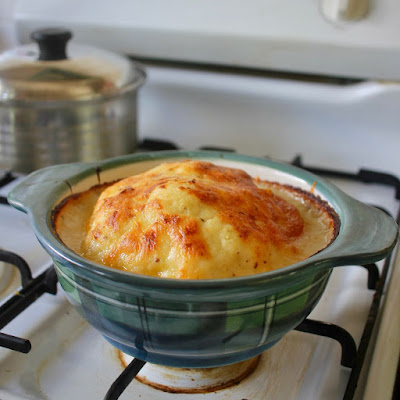 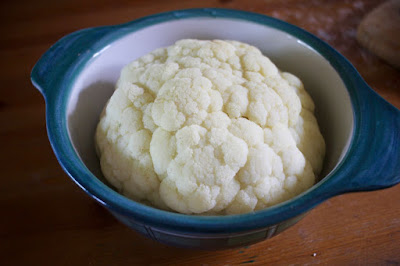 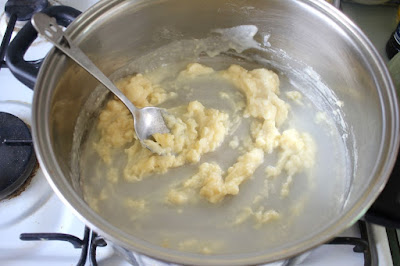 I could claim that I am more unique in making my cheese sauce with coconut milk.  Not coconut milk out of a tin but a coconut milk that was made as an alternative to dairy milk and was incredibly watery.  Actually, I only used it because Sylvia had decided she wanted to try it and only needed a mouthful or two to decided she had had her fill of it.  So I probably would not use them milk again but it does show that you can use all kinds of milk here. 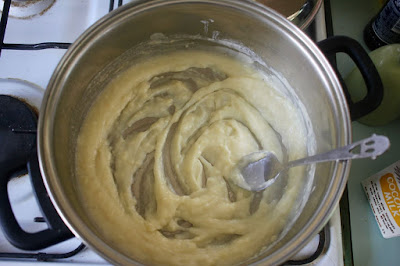 No matter how often I make cheese sauce, it is always a relief to see the lumpy roux turn into a creamy mixture when I add the milk.  It often seems so unlikely that it might be a miracle it works.  Of course it is not miracle.  Just a lot of rigourous stirring! 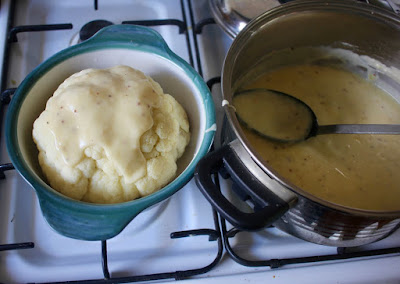 The downside of using a whole cauliflower rather than florets is that there is less surface of cauliflower to douse in cheese sauce.  Mine had lots of sauce around the outside that, once cooked, we scooped up and spooned over the cauliflower. 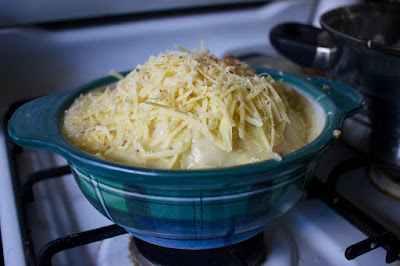 Once the cauliflower is covered with sauce, then it is time to load it up with grated cheese and breadcrumbs.  This is not a moment to start thinking about your latest diet. 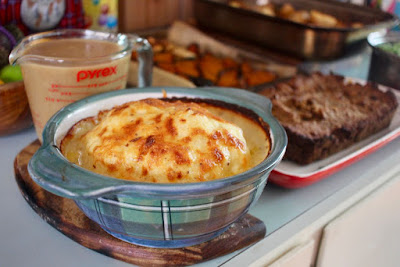 Of course, once you see it baked with its gorgeous crispy cheese crust, it glows like the supermodel of the meal.  You will want to ignore all other dishes and just have a large spoonful of it on your plate. 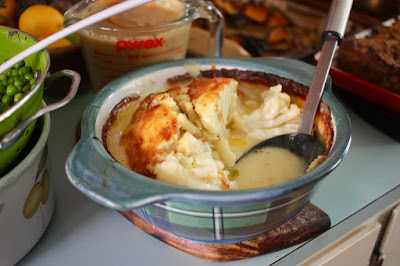 Steam cauliflower head in a large saucepan with about 1-2 inches of water at the bottom.  Then turn off heat and leave while you make the sauce.

To make the sauce melt butter in a large saucepan or frypan.  Stir in flour to make a paste and stir for a few minutes until cooked - often it is easier to tell by smelling the cooked flour but you may notice a slight darkening in colour.  Gradually add the milk: just a little at first and stir until combined and creamy, continue to add in ever increasing amounts until the liquid becomes thin (this is when you stop adding: it should not be too thick as it will thicken more when you boil it and when you add cheese - you can always add a little extra milk later but it is more work to thicken).  Bring to the boil and it should thicken slightly but still be thinnish.  Now stir in the cheeses and it should thicken more.  Season with mustard, salt, pepper and herbs to taste.

Place the steamed cauliflower in a round medium baking dish.  Pour sauce over the top of the cauliflower.  It should be thick enough to cling to the cauliflower as it pours down the side.  Generously top with more grated cheese and breadcrumbs.

NOTES: My sister often make a cauliflower cheese with a gluten free flour and it works well.

On the stereo:
Word Gets Around: Stereophonics
Posted by Johanna GGG at 22:12