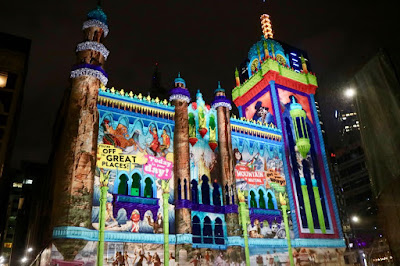 White Night Melbourne [Reimagined] 2019 was different from other years.  It was in winter rather than Summer, for 3 days not one,  and the promoters focused on three precincts at the edge of the city - Treasury Gardens, Carlton Gardens and Birrung Marr.  I liked it in winter, despite the rain, but I did not like the focus away from the heart of the city. 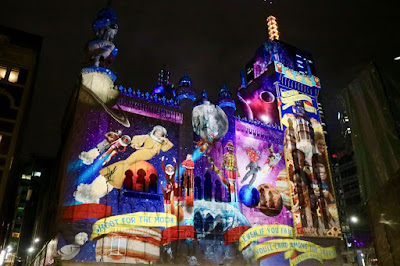 Last night my dad, Sylvia and I started at the Forum Theatre on Flinders Street ("Circus of Inspiration").  This did not get promoted well and yet was the best of what I saw this year.  The projections, which echoed the amazing historic building, were full of fun and whimsy.  What better way to start White Night than to have the spirit of Dr Suess: "You are off to great places.  Today is your day"! 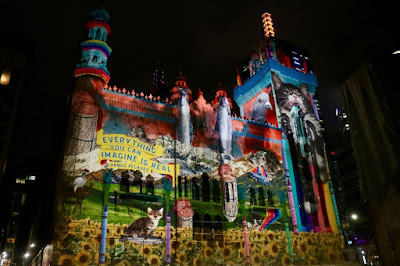 We loved this projection with such odd ideas as a pigeon riding a camel, cats projecting rainbows and crayons holding up the tower. 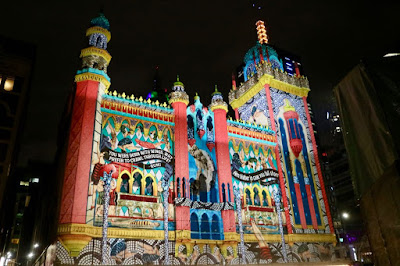 Each projection was inspired by a quote from varied writers and artists from Rumi to Picasso and the images. 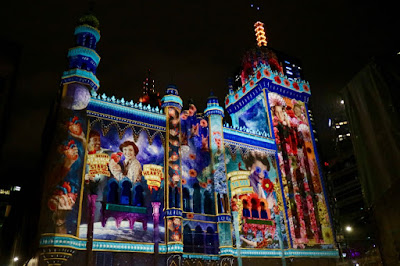 However, the crowds here were ... just about missing.  A small group of people huddled undercover at ACMI.  Flinders Street was eerily empty.  It seemed especially odd after I had been there on a previous White Night and the street was so busy.  It is such a shame not to have more people see these illumations but perhaps the wet night was as much to blame as the promotion. 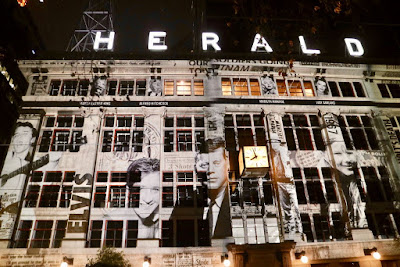 We walked up Flinders Street to the old Herald Sun building ("Impartial but not neutral") which was even more ignored than the Forum Theatre.  It has projections of newspaper headlines across the decades.  There was no place to shelter from the rain and we didn't stop long.  Only a handful of people stopped here. 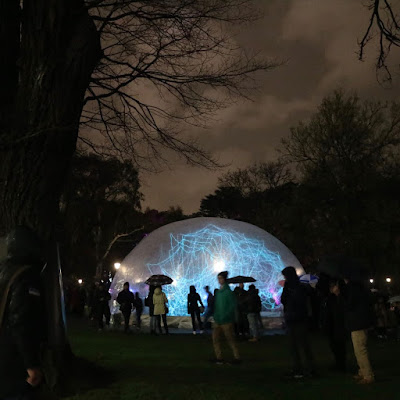 We walked up to Treasury Gardens, which was one of the promoted precinct.  There were lots of domes lit up but it was hard to get a sense of what they were about.  A few had ridiculously long lines.  The one above had a few people queued up but it was fun to just watch the light. 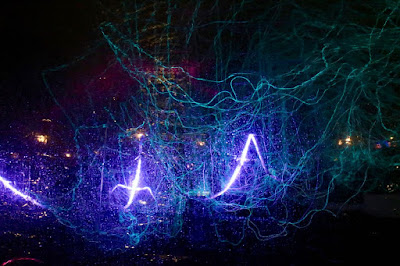 Here are the lights from the above dome up close.  When someone put their hand on a marked circle, the lights reacted to their heart rate (I think). 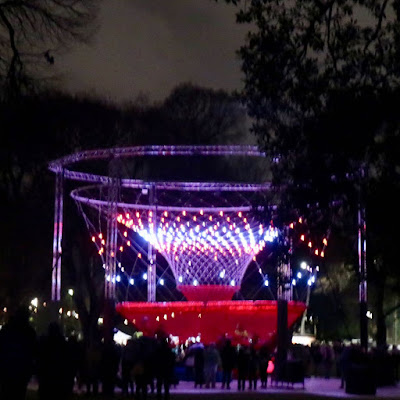 We saw other light shows that seemed to be interactive but Sylvia was tiring and so we didn't wander too far into the gardens or queue for any shows.  (I had been curious about the Waterlight Graffiti but did not see it or seek it.) 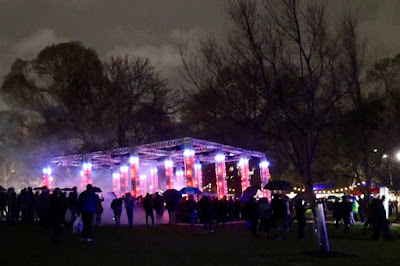 The light show looked quite impressive from afar but was rather loud once we got closer. 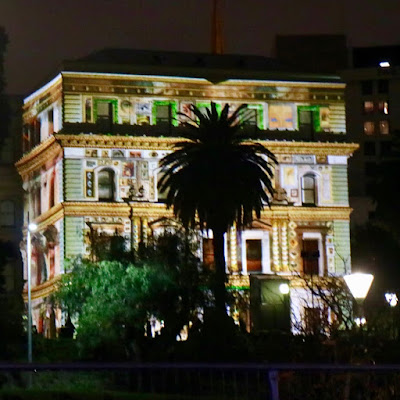 I stopped to watch the projections ("Sensoria") on the Department of Education buildings behind Treasury.  Unfortunately from the gardens trees were in the way.  But I still enjoyed watching the changing images. 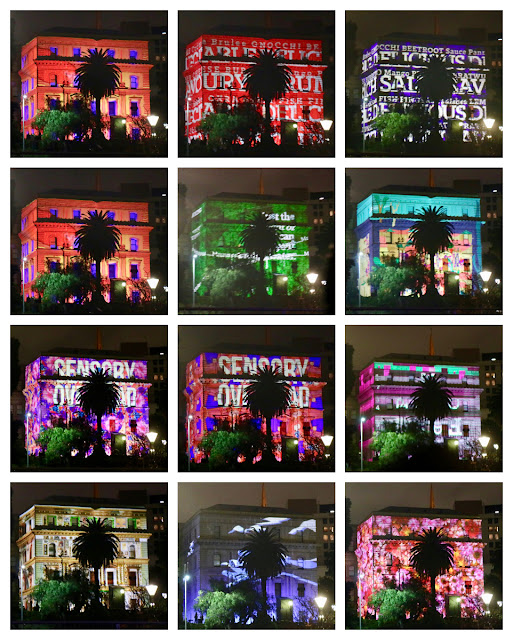 Above are just some of the changing images that we saw from afar.  Some I liked more than others but it was interesting to watch. 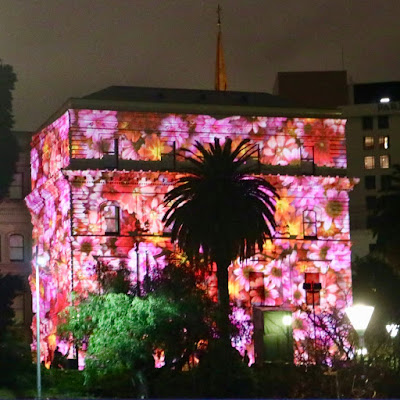 If we had had time, we could have gone up to the walkway that goes along the side of the buildings to view the projections up close but I am not sure if there was anywhere to get a big picture view without trees. 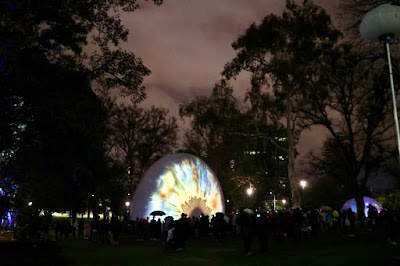 As we left the Treasury Gardens "Sensory Realm" we saw the huge eye ("Iris") surrounded by crowds.  Even from a distance this was quite impressive and unnerving as it moved and blinked like an eye. 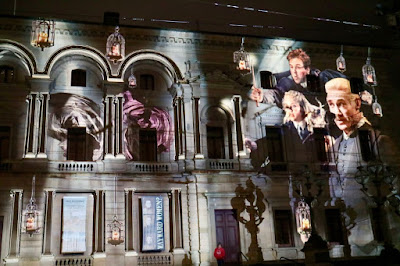 Then we walked up the Treasury Building which was lit with images from "Harry Potter and the Cursed Child".  It seemed a commercial rather than popular choice of content.  Many more would relate to the books than the play but it had a lot of aesthetics of the books. 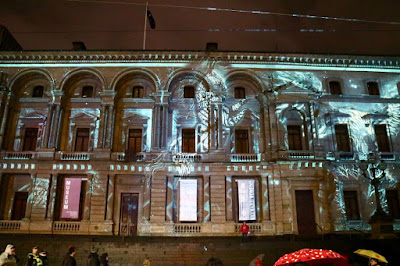 The Treasury Building worked well as a palate both because it is a magnificent building but also because there are many steps leading up the building so we were able to see quite well despite a decent crowd here. 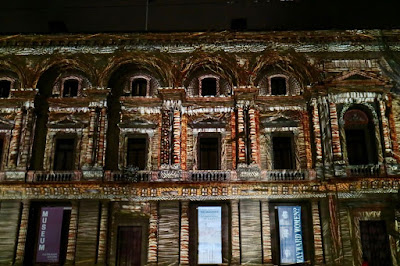 I loved this projection and how it transformed the buidling.

In the panorama view above (apologies that it is so tiny) you can see that the four houses of Hogwarts were displayed on one side and the city lights on the other.  Below is a close up of the houses. 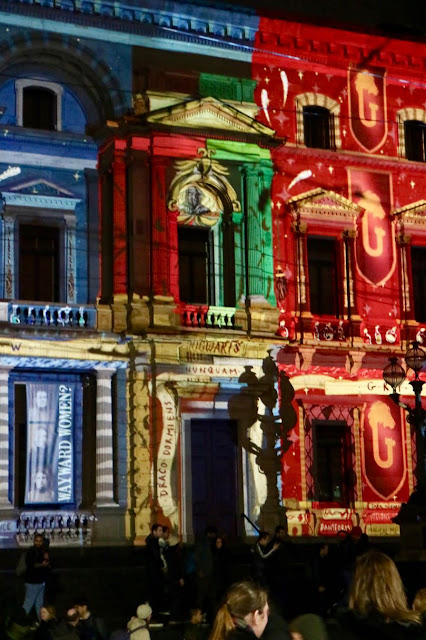 We left at the point, with a tired child who needed to go to bed.  It should have taken half an hour to get home, give or take.  However the trains were not running through the loop so after realising it would take ages to get a train, we got a connecting tram and had our tram blocked by a police car for some time.  We finally got on our tram home that had a few drunks on board constantly telling everyone rather loudly that it was the "party tram".  Finally we walked home past the train station where we saw a train pulling in.  It took 2 hours to get home so we have been rather tired today.

I will be interested to see how White Night will change again next year.  More changes are afoot.  I have found the huge crowds overwhelming in previous years but this year I found it lacked the buzz and communal feel of previous years.  But there was some great illuminated artwork to see as in previous years.