Triennial at the NGV, Melbourne 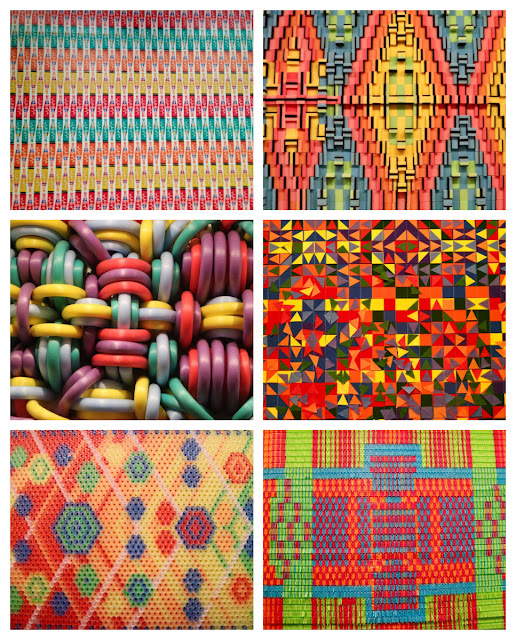 A few days ago when it was a hot 38 C, we spent an afternoon in the air conditioned National Gallery of Victoria (NGV) viewing the Triennial exhibition.  It was a fun exhibition with lots of colour and surprise.  Artists from all over the world were represented with lots of activities for kids. 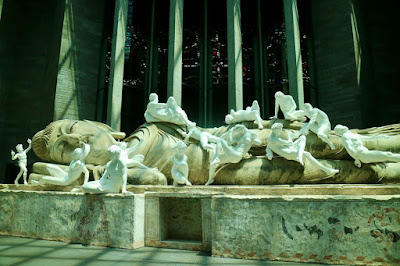 Going to the NGV on a hot day is brilliant if only for the water wall out the front.  Inside is a colorful structure to relax on a snaking seat that I did not photograph.  Then you feel the awe at this giant reclining Buddha surrounded by classical nude statues, created by the Chinese artist Xu Zhen.  The statues look tiny but they were actually life sized. 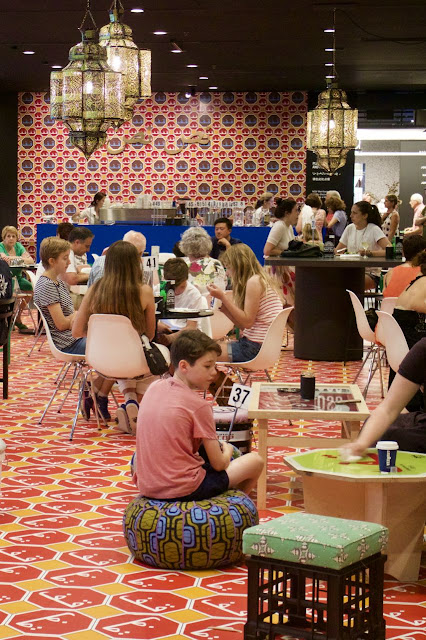 Our next destination was the drinks station in the cafe to fill our water bottles.  We had already eaten at Southbank and so, sadly, did not have the time or inclination to eat in this gorgeous replication of a Moroccan tea house, designed by Hassan Hajjaj.  It was stunning with bold colourful patterns, milk crates with cushions, and beautiful hanging glass lamps. 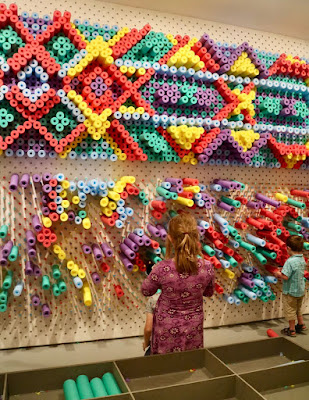 Next we went to a room full of everyday items transformed into works of art by We Make Carpets.  At the very top of the page is a collage of lots of these artworks.  From top left clockwise the art works are all from this room except the first: i) wallpaper of soft drink bottle from cafe, ii) kitchen sponges with scourers , iii) felt (I think), iv) pegs, v) shuttlecocks, vi) pool noodles.

There are lots of interactive activities for the kids in this room.  Make a prison of pool noodles and bursting out of them was the favourite for Sylvia and Dash.  There was also an activity to make a pattern of tiles and stick felt on the wall. 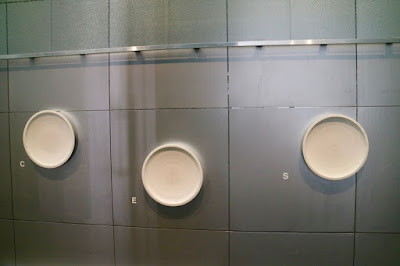 Outside we saw odd squares and circles on the wall.  Sissel Tolaas, a Norwegian chemist and artist, had created this SmellScape Melbourne_PastPresentPast. 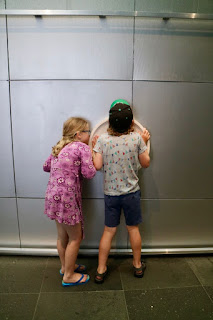 It seemed very odd to walk along the corridor putting your nose close to the ceramic pieces to smell them.  The kids didn't like most, though they liked what Dash thought was meat and Sylvia thought was a smoked almonds smell.  Most smells were hard to name.  Some were awful (horse poo? coriander?), but others were more nostalgic (dusty old books?). 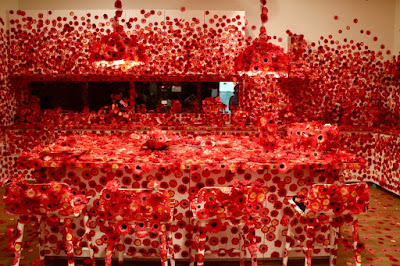 Our next stop was Yayoi Kusama’s Flower Obsession.  This was my favourite exhibit.  A whole house had been furnished with items from Ikea.  Each visitor to the house was given a flower sticker and asked to find a space to stick it.  When we visited the exhibition had been going for about a month and still had 3 months to go.  Look at how covered the above kitchen is.  You can make out the chairs but not the sink and oven. 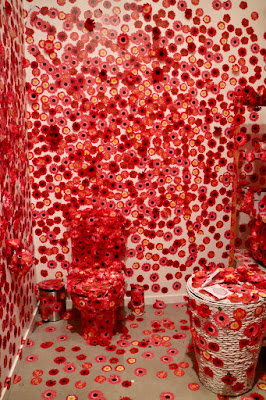 Lots of unexpected items were covered with stickers, such as a pot plant or a guitar or a jacket hanging in the bedroom.  I left my flower on a bookshelf.  The kids were fascinated by the toilet.  Of course! 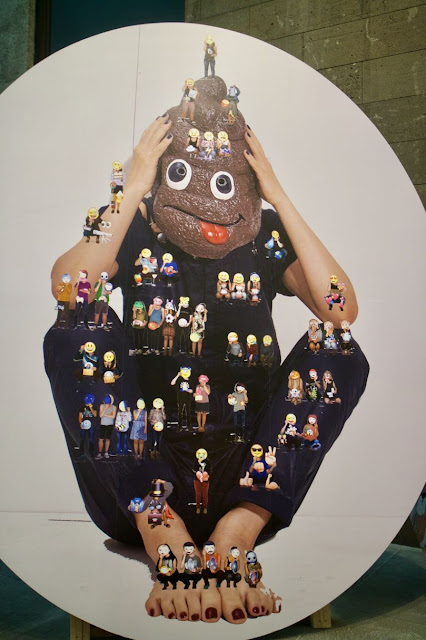 We then headed over to the South side of the ground floor where there was a lot more to see.  This huge picture by Olaf Breuning a person covered in people with emojis over their faces was so big that the kids were not even half its height.  They were quite fascinated here too. 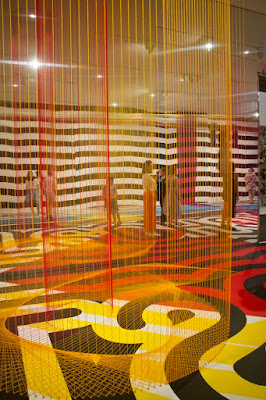 This room by Uji Handoko Eko Saputro, AKA Hahana was quite trippy with lots of stripey patterns, woollen cylinders, and mirrors.  It took a while to get perspective on how big it really was. 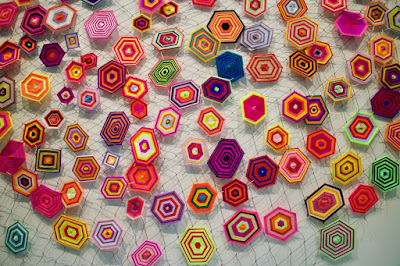 I really loved this exhibit of simple woollen weavings by Akay Koo'oila Women's Art Centre Artists from Cape York in Queensland.  It could have been a CWA craft display but was probably more colourful and looked gorgeous all hung together on fishing nets.

We walked through lots of rooms with interesting artwork such as Paulina Ołowska's paintings (the woman on the horse was stunning) and Neri Oxman's The Vespers Series with odd masks that reminded me of aliens in Dr Who.  No photos taken as I was supervising and talking. 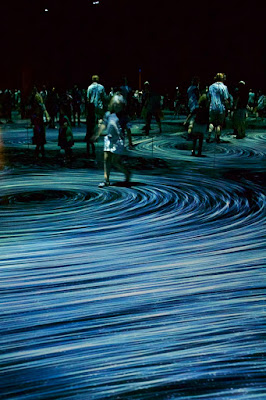 The beautiful swirling lights in the room created by teamLab was great for kids to dance about.  I think it was called Moving creates vortices and vortices create movement.  The lights reacted to movement.  At first it seemed a very crowded room until the brain understood that there was a feeling of so many more people created by the clever use of mirrors.  It felt very other-worldly. 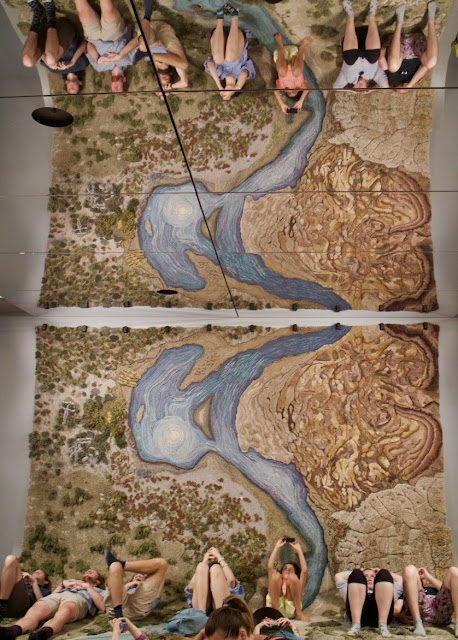 Another amazing interactive room was the Alexandra Kehayoglou woollen rug that created a landscape and was reflected by mirrors on the ceiling.  We were invited to take off our shoes and lie on the rug.  Looking up at the reflection of the rug with people lying on it really did give a different perspective.  And it was very relaxing too.  I could have just lain there all day. 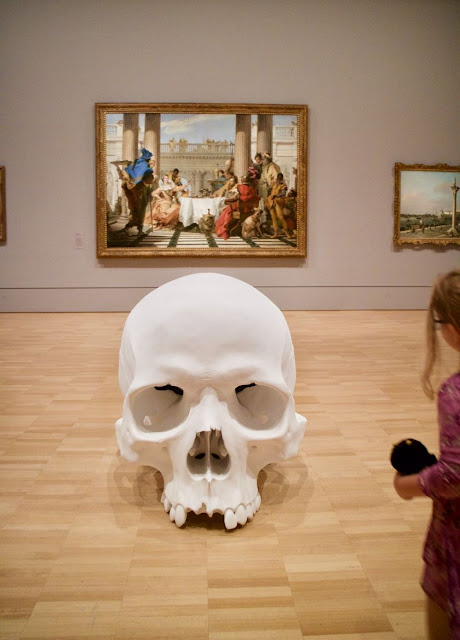 The bulk of the Triennial exhibition seemed to be on the ground floor.  There was more on the higher floors but I found it a bit harder to navigate.  Maybe a map would have helped.  Once my mum, Dash and Chris had left, I went up in search of Ron Mueck's skulls.  Having only seen pictures of the pile of skulls I was quite surprised to come across this giant skull in the European paintings rooms. 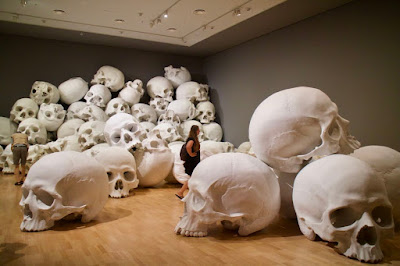 Even having seen one of the giant skulls I was still surprised at seeing 100 skulls a few rooms away that were so much bigger than I had expected.  I am sharing a photo with people in it so you can get some sense of the size.  Even given that the skulls were made of resin and too big to be real, there was something disturbing about all these skulls, all this death.

I highly recommend the Triennial as a place to visit if you are in Melbourne in the next few months. I would love to go back and am more likely to do so because it is free.  It would be great to go through and look at some of the exhibits we missed or skimmed over and be able to enjoy a bit more of the issues as well as the fun.

Also check out  "NGV Triennial: astounding blockbuster grips the heart ... and repels the nostrils:, The Guardian, 17 December 2017.
Posted by Johanna GGG at 23:49