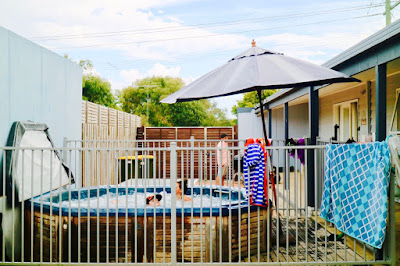 We are back from our week at the seaside in Ocean Grove.  The suitcases are unpacked but I am yet to do all the loads of laundry.  It was a holiday of the hot tub and the stub club!  The house we hired didn't have wifi but it had a hot tub in the backyard.  So we were mostly offline with lots of relaxation in the hot tub as well as lots of time at the beach. 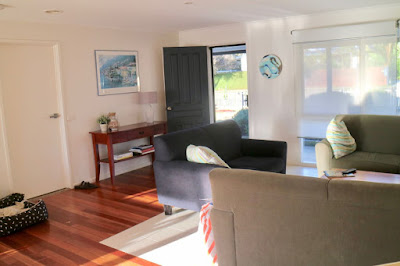 It was a huge house with 5 bedrooms so lots of the family could stay.  My mum and dad, my sister and her son and me and Sylvia stayed the whole week.  Other siblings and kids came and went because Ocean Grove is close to where they live in Geelong.  One night we had 8 kids and a full house, which was quite fun but chaotic. 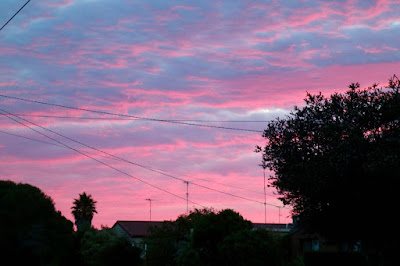 On the first morning, my brother Paul took a group of kids to the beach early and my nephew stubbed his toes and almost knocked off his toenail.  Paul heroically piggybacked Dash home about 4  or 5 blocks.  Amazingly, Dash's toenail healed wonderfully over the week.  We attributed it to the healing properties of the sea.  There were too other stubbed toes on the holiday, hence the Stub Club!  My dad is also convalescing and I am sure walks on the beach were very good for him too.

The above picture of the sunset was from one night when Paul decided to run to the beach to photograph the sunset.  We only got halfway there before the sunset was over.  So we had to be content with the photos we took along the way. 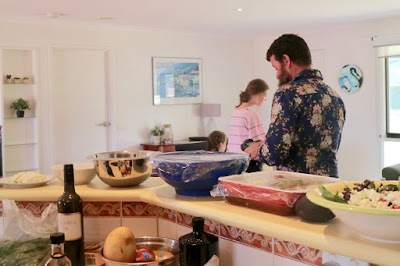 The reason we were staying at the holiday house was to celebrate my parents wedding anniversary.  So we had a day where Susie's boyfriend cooked meat on his Webber, the rest of us made salads and desserts.  Above you can see salads lined up on the bench. 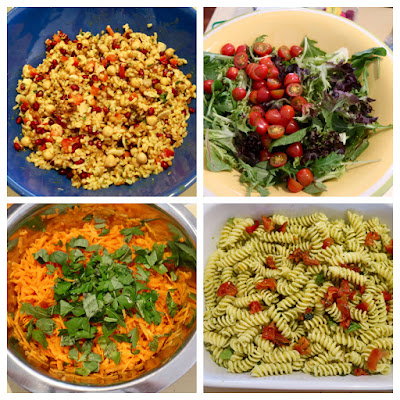 And here are the salads.  Keep in mind that I photographed them while work in progress because it was such a busy time getting lunch together that I didn't have much time for the camera.  Clockwise from top left: My mum's brown rice salad with lots of pulses, nuts ad pomegranate seeds; Chris's garden salad with fetta; Chris's pesto pasta salad with haloumi, Fergal's seedy carrot salad. 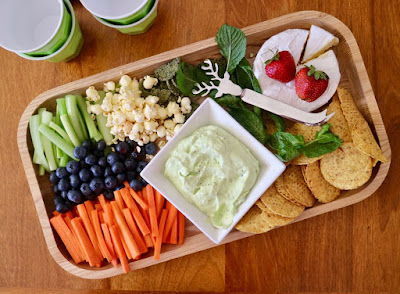 Fran is into stunning platters at the moment and made two.  The above one was camembert, avocado dip, corn chips, popcorn, carrots, celery, blueberries and some strawberries and mint for garnish.  It was a beautiful platter of nibbles to keep us going before a 3pm lunch (because Dave was arriving late).  A late start also gave time for speeches and for Paul to lead the grandchildren in an anniversary song. 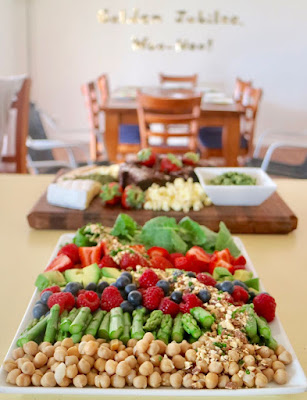 I made a Cobb Salad with smoked nuts and a blue cheese sauce.  (You can see the Cobb Salad recipe on my previous post.)  It was pretty easy to make in the holiday house.  Fortunately my mum already had some blue cheese on hand and the dressing was easy to make by hand, though the recipe I used directed to use a food processor.  In the photo above the table is set for 8 but my brother Andy brought along an extra trestle table to seat all of us. 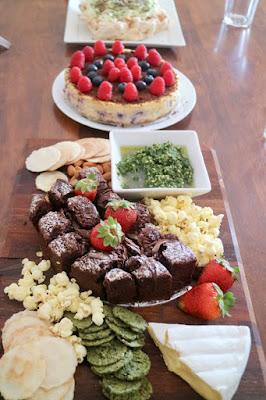 I was pleased after a large plate of salads to still have room for dessert.  We had a generous spread with Fran doing a chocolate cake dessert platter, and my mum making raspberry cheese cake and pavlova three ways.

My family all has different preferences when it comes to pav.  The kids love peppermint crisp, my mum loves passionfruit and Dash prefers his without cream.  My mum caters to everyone. 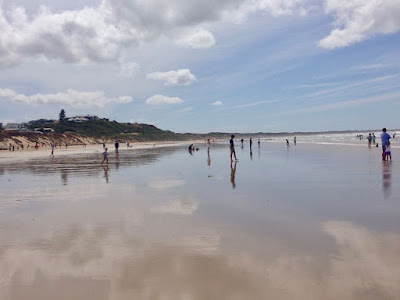 We spent quite a bit of time at the beach.  It is never as much as I would like but I can't complain too much when I had a few days when we managed two trips a day.  The Ocean Grove beach is very flat with a huge expanse of beach at low tide (above) and almost at the ramp at high tide (above). 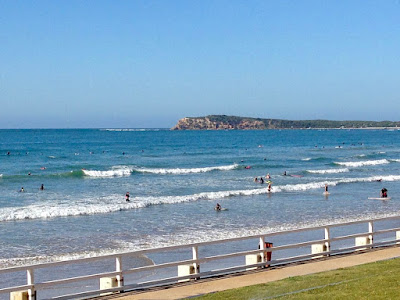 The weather went up and down.  One day it was a high of 41 C and then next day it would be 21 C.  Fortunately the rain held off until we left on the last day.  But there was a lot of watching the mercury.

Trips to the beach involved a lot of slathering on sun cream, digging in the sand and riding the boogie boards.  We had a well trodden path to the clothes line where we hung out the wet bathers and towels.  And my dad did a sterling job of searching for my niece's lost fitbit (that was found in her clothes when her mum did the washing). 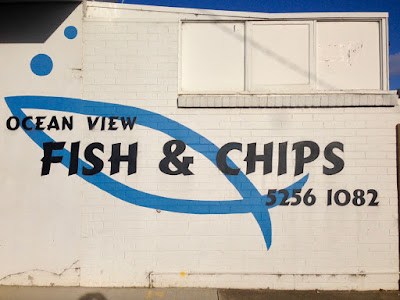 Other than the anniversary lunch meals were very casual.  They ranged from leftover salads to dips and bread to a taco table to sushi to fish and chips.  We had fish and chips on the night that we had 8 kids in the house and sat outside once we had dragged the last kid out of the hot tub to eat dinner.  The kids loved having coco pops for breakfast, most of my family loved egg and bacon whereas I was very happy to have baked beans on toast. 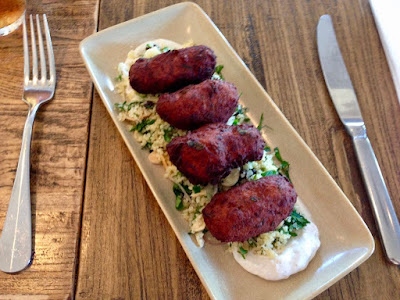 We didn't eat out much.  My favourite place was Kyosk which I will write about separately (because I loved the avocado, beetroot dip, sauerkraut and pistachios on toast so much).

Above is my meal of pumpkin fritters, cracked wheat salad and labne that we had at Napona one night.  It was a very stylish restaurant but not quite my sort of menu. 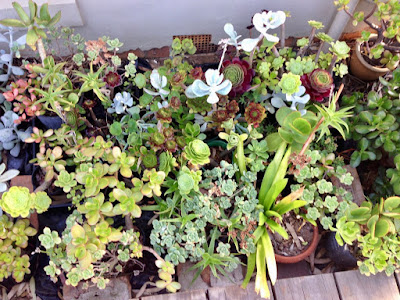 Sylvia did not fancy her kids spaghetti with tomato sauce at Napona so she spent a bit of time outside.  I was quite taken with their garden of succulents.  I have never seen succulents looking so pretty and green.  My photo does not do it justice but I am sharing the photo in case I ever have the opportunity or yen to do such a garden myself. 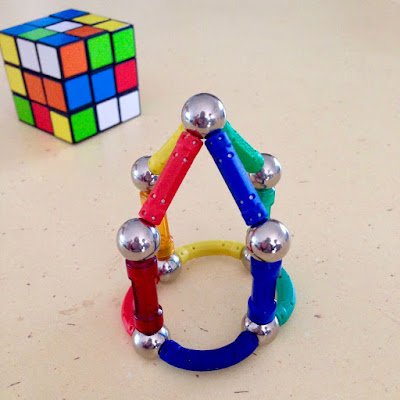 The adults were happy to spend time sitting around reading books and magazines.  I finished Family Baggage by Monica McInerny.  The younger kids were more interested in games.  The house came with some construction games like the marble drop and the magnetics (above).  My older nieces were using Youtube to teach themselves how to solve the Rubik's Cube.  There was also plenty of rooms for hide and seek. 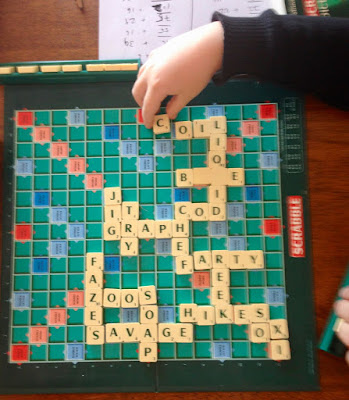 And there were board games.  Dash brought along his Harry Potter Cluedo.  We brought along Forbidden Island.  Someone brought along Monopoly (Australian here and now edition).  And one afternoon when Sylvia and Dash started poking me in boredom, I sat down with them and played Scrabble.  My dad was brilliant and helping with words but I was amused to see that the kids were happier to put down a naughty word than to score lots of points. 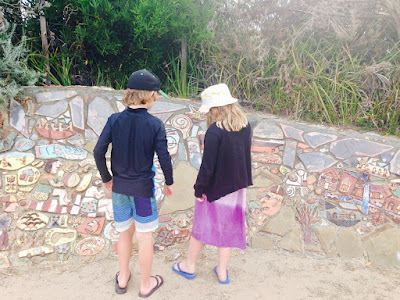 And then there was one last dinner to use up all our holiday pantry and one last sleep.  The last night was a hot one that ended in rain at about 6am on our last morning that required a dawn run outside to bring in our bathers and towels for the last time so they weren't wet on the drive home.  I was quite tired as we left and a bit narky that the rain robbed me of my last trip to the beach but I was glad to get home.