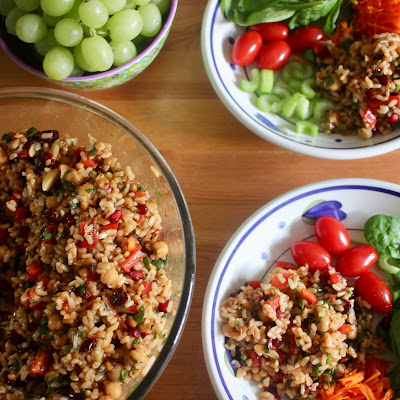 So our holidays come to an end.  Back to work, back to school tomorrow.  I leave you will a fine brown rice salad and some memories of the holidays.  First the salad which I got from my mum who got it from my sister who got it from a colleague.  Frankly I am not sure where it originated (though am happy to be told).  However it is indeed good enough to have done the rounds. 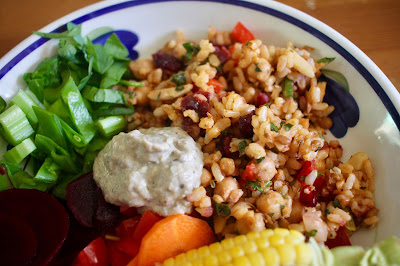 The recipe I was given used curry powder and cumin for spices but I changed these to smoked paprika and mustard.  Otherwise my version was pretty close.  And I was pretty confident when I first made it because I had eaten it a few times and loved it.

It was not quite all smooth sailing.  On the night I made it, here seemed a bit too much dressing and too much lime.  I seasoned it very well.  When I spoke to my mum she said it had been too wet only once and she has made it a few times.  I wondered if this was because my limes were quite large.

However by the next night all the flavours had settled down and the dressing had been absorbed.  I loved it.  Which is just as well because there was a lot of it. 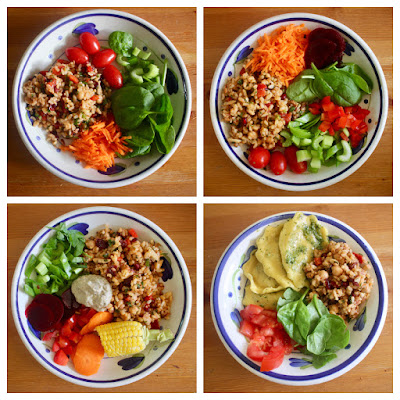 According to my photos it lasted me at least 4 nights but I know I had it for lunch a few times too.  At the end of the week I was a bit tired of it, which is why I was serving it with ravioli for some change.  But I did really love it.  Lots of crunch from the slivered almonds (which I forgot to toast), soft comfort from the legumes, and sweetness from the dried cranberries. 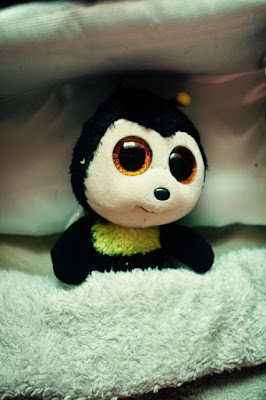 The salad seemed to be the salad of the holidays given that I also had it at our Ocean Grove beach house when my mum made it and I think she might have given me some another time but can't remember when.  So here are some of the things we did on the holidays with a few random moments:

Jumping waves at the beach.  Eating out at cafes. Taking Sylvia into my workplace.  Climbing an old dredger with my brother in Maldon.  Sleepovers.  Swimming at the pool.  Starting Sylvia's 1000 piece jigsaw.  Enjoying modern artwork at Triennial at the NGV  Celebrating my parents wedding anniversary.  Watching Shadow cat slinking under the couch during thunderstorms.  Sitting in the hot tub at the holiday house.  Tidying the house.  Watching the tennis on tv.  Eating birthday cakes.  Helping a friend hacksaw blinds to fit her windows.  Getting my bike repaired.  Updating my MS Office on my computer.  Watching Gavin and Stacey sitcom.  Shopping.  Reading Harry Potter (6) aloud to Sylvia during the day.  Making sure Buzzy Bee was at Sylvia's side. 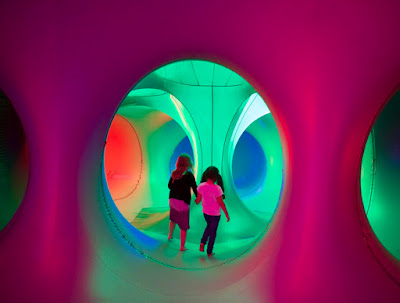 My niece came to our place for a sleepover and had quite a busy time.

We went into the city to wander through the trippy light tunnels of Arboria (a luminaria by Architects of the Air from the UK - see above photo).  Before going in I thought I would feed them with some sushi in Fed Square.  However when I stood to shoo the feral seagulls away one of them sailed past and took my tofu teriyaki handroll out of my hand.

When we got home, she then came with us to the vet because our cat Shadow had arrived home late the previous night and we noticed he was a bleeding a bit.  The vet said all his claws were broken as if he had run them along bitumen or concrete such as tumbling away from a car.  We don't know what happened but it gave Shadow quite a shock. 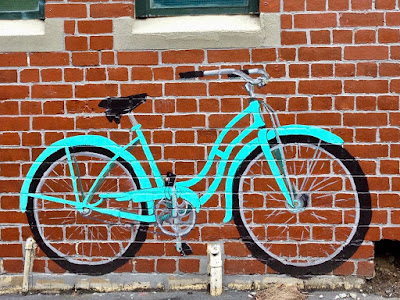 Lastly a couple of random notes:

Mix all salad ingredients.  Lightly whisk together dressing and pour over salad.  Toss until mixed.  Keeps for about a week in the fridge.

NOTES: I think I cooked 1 1/2 cups of raw brown rice in 2 1/4 cups of water for 20-30 minutes.  When I added the dressing it was really wet but the next day it was great.  I put 4 limes in but they were big limes, so I had amended the recipe to be 3-4 depending on size.  I used 2-3 spring onions finely sliced instead of red onion.

On the Stereo:
Black is the Colour: Cara Dillon
Posted by Johanna GGG at 22:47