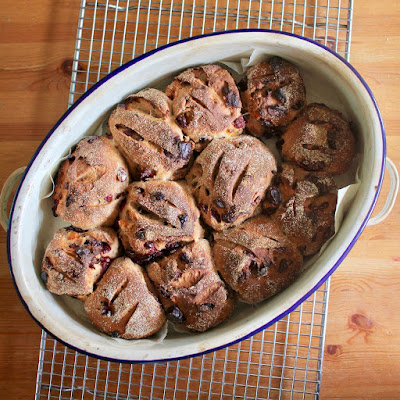 Just after Christmas I made some chocolate fruit bread to take to friends place for lunch.  It was a variation on my favourite overnight sourdough loaves.  The night before the lunch when I was planning to put the dough together, Sylvia was not sleeping (thanks to all the unsettled festive evenings).  So we talked about what bread I could make. 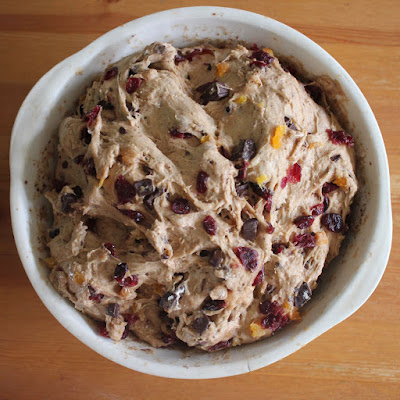 She was quite taken by the idea of chocolate in a bread ever since I made the Malted loaf with chocolate, figs and brazil nuts a couple of years ago.  So we decided it would have chocolate.  I wanted nuts but Sylvia was not keen.  We agreed on some dried fruit.  I meant to put in only cranberries but didn't have enough and had some leftover dried apricot.  And Sylvia insisted on cinnamon and treacle.  I also used soy milk rather than water as a friend had told me how soft his bread with milk was. 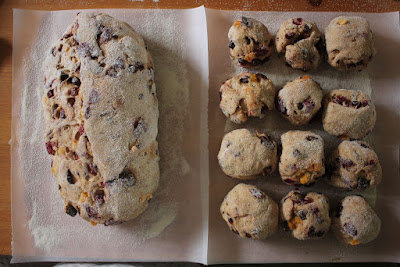 So the recipe was a bit of a brainstorming hotch potch.  The dough seemed quite tough when I shaped it the next morning.  I decided to make one loaf and one batch of rolls to squirrel away in the freezer.  Rolls last really well in the freezer but they take longer to shape. 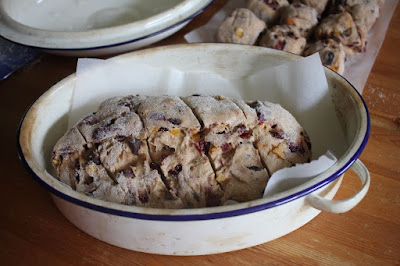 Then I lit the gas oven and waited for the dough to rise.  I think the dough got an extra hour of rising thanks to my fickle oven.  It just would not stay alight.  Every time I thought the oven was preheating, I would peek in and find the flames had gone out.  I wonder if it was the unseasonably wild rains playing havoc with the gas pipes.  It was very frustrating. 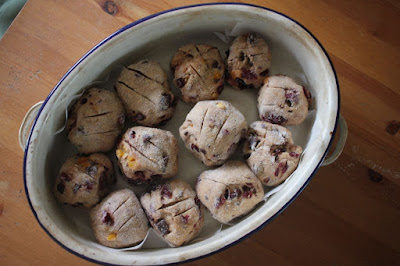 I had planned to bake the bread and give it some time to sit before taking it to lunch.  Instead by the time I was ready to go, I was just taking the bread out of the oven and took a very hot loaf to lunch.  Fortunately it had time to cool before we ate it, as we had some eggy pastries with salad first.  Then we sliced into the loaf and ate it warm with lashings of butter.   Wow, Just Wow!  As Sylvia likes to say.

Meanwhile Sylvia had a lovely time playing with her friend and sister, especially with Tom's new Google Home Mini that he had been given.  He set it up to so this little disc of technology could answer his questions.  The girls were very excited to talk to it.  ("What time is it?  What is the weather?  Do you know Siri?" etc etc.) 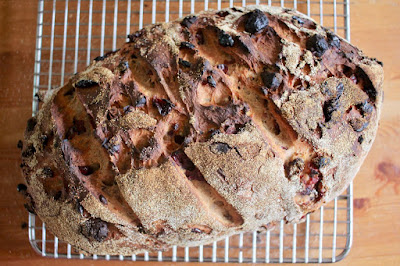 And the loaf was really good.  Perhaps even better for sitting around waiting for the oven to light.  The chunks that were exposed on top were pretty charred but warm chocolate and dried fruit in a lightly spiced lightly sweetened fruit bread are heavenly.  We enjoyed eating the rolls warmed from the freezer over the next week or so.  I am sad to report they did not last long.

Chocolate, cranberry and apricot sourdough bread
Makes 2 loaves or 24 rolls or a half of each
Adapted from Green Gourmet Giraffe

[A few hours before making the loaf, take sourdough starter out of the fridge and feed it so it gets bouncy and bubbly before you weigh it.]

In the late evening, at least half an hour before going to bed (or first thing in the morning) mix everything together.  It is easiest to mix everything except flour first and then add flour.  Use hands to mix if required.  Set aside covered with a tea towel for half an hour.  Knead in the bowl for about 1 minute.  Cover with greased clingwrap and leave at room temperature for 8 to 12 hours.

Scrape dough out onto a lightly floured board.  Shape into a loaf shape or rolls.  Place on a floured surface and cover with the lightly greased clingwrap.  Set aside to rise for 30 minutes.  While the loaves rise, preheat oven to 240 C, with casserole dishes heating if you are using them.

Slash the loaves and put in the heated casserole dishes with lids on (or on a tray or in a tin).   (They don't need greasing.)  Bake for 20 minutes with lid on.  Remove lid and bake another 20 minutes.  If crust needs more colour, reduce oven heat to 180 C and return to oven for another 10 minutes (mine was quite well browned without the extra 10 minutes).  Cool your loaf on a wire rack for at least an hour before slicing.

NOTES: For more extensive notes on this method, go to my post on overnight sourdough bread. Other dried fruit could be used.  I used half white and half spelt but you could use all white or half white and half wholemeal.  I made one loaf and 12 rolls.  For the floured board I used semolina flour but when I shaped the rolls I found it useful to use a little regular flour on my hands.  To make sure the bread is vegan make sure your chocolate is dairy free.

On the Stereo:
Reputation: Taylor Swift
Posted by Johanna GGG at 19:23