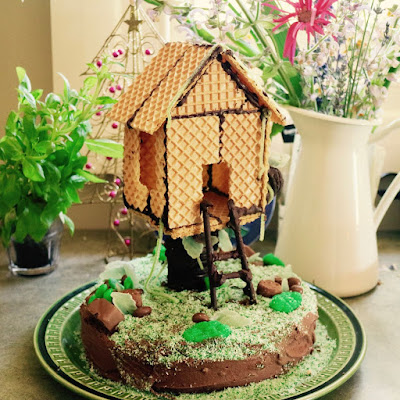 Sylvia and I love browsing birthday cake books.  When it was her cousin's birthday recently we knew exactly which birthday cake we wanted to make for him.  A tree house seemed just right for an active, adventurous kid like Dash.  I am not sure it was quite the easy party cake the book promised but it was fun and we were pleased with our cake.  So was Dash. 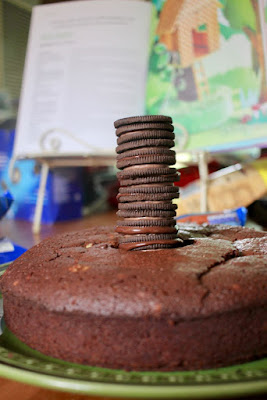 We baked the cake the day before the party and decorated it early on the day of the party.  We ignored the instructions to take the cream filled centres out of the oreos and when the  oreo trunk was not so stable we realised that melted chocolate holds far better than cream and we replaced the cream centres with oreos.  We also found that the hold in the middle of the cake seemed much bigger than the oreos.  I was tempted to plug it with melted chocolate which would have made it more stable but perhaps too much chocolate! 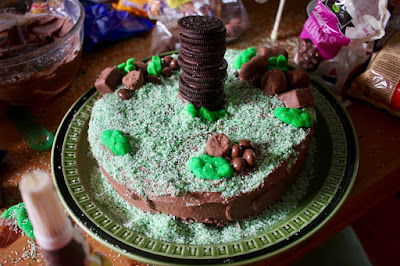 I decided that the cake needed more than just some (coconut) green grass and some mint leaves, which was what the Australian Women's Weekly book had.  So Sylvia and I had fun using chocolates and lollies to make a bit of garden around the tree house. 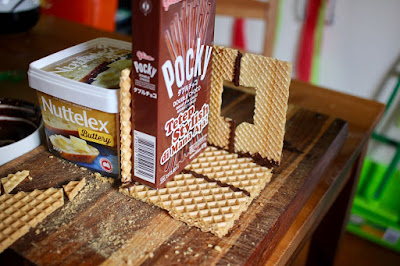 When it came to building the actual tree house out of ice cream wafers (we bought these in the section of the supermarket that had ice cream cones), I found that my experience of making gingerbread houses was really helpful.  I used the same method of holding up the walls with whatever was on hand until they dried.  I had to trim the wafers a little to make them fit when putting the house together but it wasn't too hard.  However I would not claim this was easy.

On the picture in the book you could not see the joins between the wafers.  I am not sure how they did this and got the wafers to stick together.  I did wonder about using white chocolate instead of dark but as tree houses are rustic creations I was not too concerned.

Yet again we had trouble finding pretzel sticks (as had been the case last year).  We tried quite a few shops - not just the supermarket.  Finally we did find some but they were thicker and had sesame seeds on them so we bought some chocolate pocky.  This actually worked well because you didn't see the chocolate joins.  I was relieved about this when we had to fix the ladder a few times. 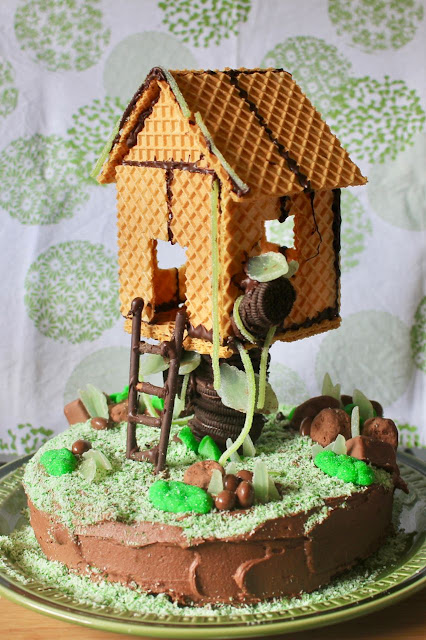 Finally our tree house cake was finished.  We were proud of our achievement.  The next challenge was to take it in a car an hour down the freeway to Geelong.  Sylvia often sleeps during the drive to Geelong and as we drove I could see her dropping off.  The cake was right beside her.  Which would be good for her to check on it.  But was worrying as she nodded off and her head kept drooping in the cake's direction.  I kept watching her in the rear vision mirror and finally had to wake her up for the sake of the cake.

Despite our best efforts, the tree house came off the perch and broke a little and the trunk fell over.  I had feared this might happen and taken along my melted chocolate pot and some icing.  You never know when you will need to patch up a cake.  We were able to fix it quickly once we got to my parents. 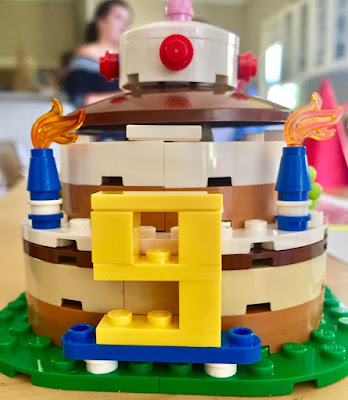 Other than cake dramas, there was lots of fun happening when we arrived.  Lots of presents.  Check out this cool lego birthday cake.  Dash's parents are amazing party planners so it was a great celebration. 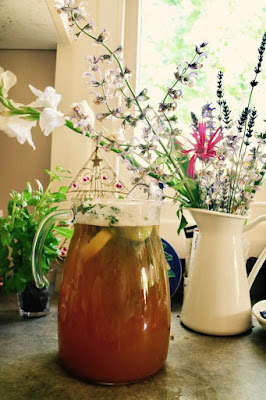 His dad had made one of his amazing mocktail punches for the kids.  And he had drawn colour your own placemats for the kids.  Something for them to do while everyone arrived.  (See Sylvia's below.)  Some of the kids were outside playing cricket as it was a really lovely sunny day. 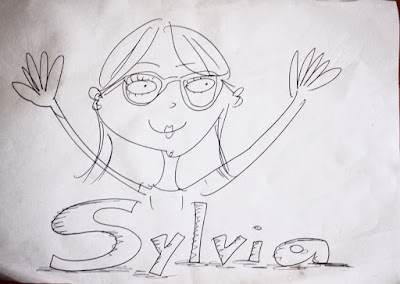 There was party food.  Cheezels, chips, sausage rolls, cocktail frankfurts, sausages (yes Dash likes sausages), fairy bread, Tim Tams.  And the cake.  The kids had a discussion about blowing out the candles that amused me.  They decided you couldn't blow too hard or you might blow the tree house over.  Everyone enjoyed the cake.  I was really happy with the frosting that was really creamy and chocolatey and not to toothachingly sweet. 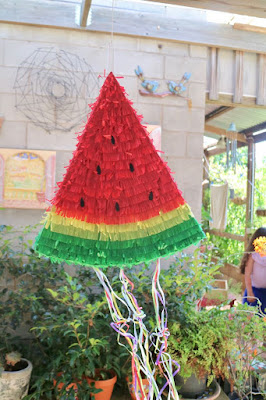 Then there was the watermelon pinata.  As usual there was the queue of eager kids and the concerned adults.  However now the kids are older, the first little boy to bash the pinata with a cricket bat felled it with one hard blow.  The pinata was strung up again but it fell to the ground quickly, even with a broom handle instead of cricket bat.  After a bit of bashing it on the ground it collapsed, as did some of the whizz fizz packets inside.  Lots of fun for the kids!  Then we headed off to the beach to end the day with swim and sand.

I am sending this cake to Tin and Thyme for We Should Cocoa. 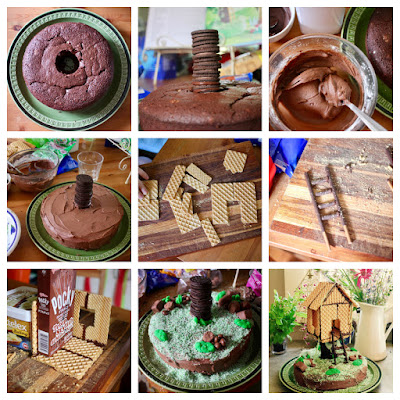 Use a 4cm diameter scone cutter to cut a hole in the Cut a 4cm hold in the cake.  (Discard cake or save to crumble and use as dirt for garden sections.)  Scrape the cream out of the oreos and join together with melted chocolate stacking in the hole in the middle of the cake as you go.  This is your tree trunk.  (Don't be tempted to keep cream in oreos or the stack is less stable to hold the tree house.

Rub a few drops of green food colouring through the coconut.  Spread frosting over the top of the cake.  Arrange mint leaves, green lollies, crunchies and chocolate sultanas around the edge of the cake to make the garden around the edge.  Sprinkle coconut over the rest of the icing while it is still damp so the coconut sticks.

Make ladder with pretzels or poky sticks.  Break one stick into smaller rungs.  Use two sticks to be the sides of the ladder.  Use melted chocolate to glue the rungs to the side sticks.  Set aside in a safe place (ie it is quite fragile.)

Make the tree house.  Cut wafers to make windows and a door.  Glue wafers together with melted chocolate: Put some melted chocolate in a longish tub so you can dip the edges of the wafers into chocolate.  Place aside to dry and gently use a knife to prize off surface.  I did two layers of wafers for the floor to make it more stable.  When you put together walls, use boxes to keep walls upright while they dry.  Then put on roof and hold for a bit to dry.  If you are concerned about roof falling off you can put something underneath the edges to stop it slipping.

Combine butter, chocolate, water, sugar and orange juice in a large bowl and microwave (or heat in saucepan) til melted. Cool slightly (if you have time and patience).

Add flours, cocoa and eggs and mix til combined and smooth. Don't worry if not 100% smooth mixture - just mix in as much as you can or sift flours and cocoa if you can be bothered.

Pour into prepared cake tin and bake 1 1/4 hours. Cake should be cooked but slightly gooey (ie the sort of gooey where it doesn't look like cake batter).  Sit at least 10 minutes (I did overnight) before turning out onto rack to cool.

Melt chocolate and margarine together.  Cool until treacle consistency rather than water consistency.  I find melting in the microwave helps to melt at a lower temperature.  Gradually stir in icing sugar.  Add a dribble of water to loosen up.

On the stereo:
Tigermilk - Belle and Sebastian
Posted by Johanna GGG at 09:18