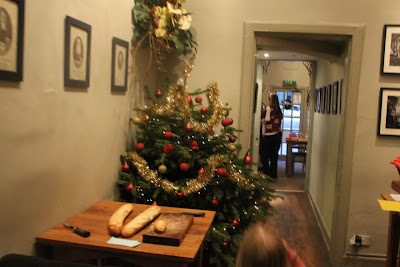 Did I tell you that I am quite shy of getting out my camera when eating out!  In my last Edinburgh post, I regret to tell you that I had an epic fail in capturing the place in pictures.  I blame the pubs.  Yes, the pubs!  You see we never meant to go to Stac Polly and by the time we arrived I was feeling like a neurotic daughter in law. 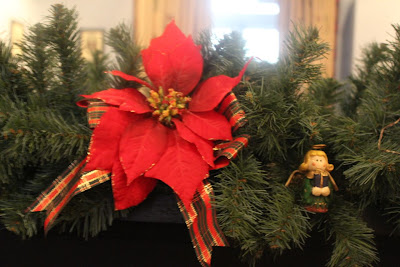 On our last day in Edinburgh, we headed out to lunch with my father in law.  I was all set to eat a hearty pub lunch before being faced with plane food.  The pub in question was called Number 1 High Street.  It used to be the Tass and we had a great haggis lunch there years ago.  But they don't have a licence for children.  So we went across the street to the World's End pub.  They said they served children until they saw that Sylvia was in a stroller and too young for them.  The pub around the corner was closed.  I checked Stac Polly and it didn't have chips for Sylvia.  So we went to a cafe that was cold and empty and soulless and felt wrong.  They had taken the order and were bringing the first drink to the table when I said we had to leave. 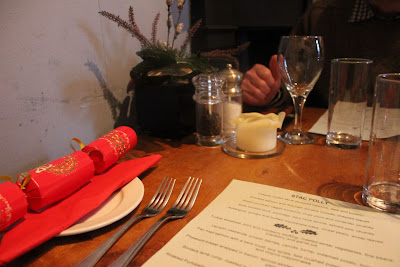 And that was how we ended up at Stac Polly.  Many people just go there because it is a fine Scottish restaurant.  The menu is enough to entice.  But not the sort of menu for a three year old.  I decided Sylvia would have to just eat bread.  It is as good as chips.  As it was, they were very accommodating.  Perhaps it was because we were the only table that wasn't an office Christmas party.  Having a three year old made us fit right in with the revellers celebrating the silly season.  Within minutes of arriving, Sylvia had pulled all our Christmas crackers. 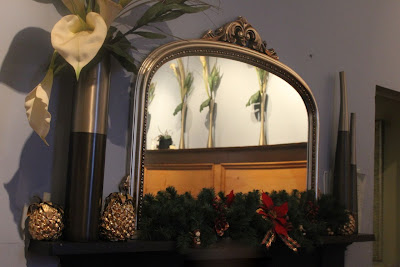 Stac Polly was more upmarket than most of the places that we ate in Edinburgh.  Yet every bit as welcoming.  Very importantly, the place was warm.  It was bitterly cold outside with snow having fallen that morning.  We were at the St Mary's Street restaurant which is just a narrow terraced building with a few small spaces.  (Their Dublin Street restaurant looks bigger on their website.)  I liked the cosiness and the elegant Christmas decorations. 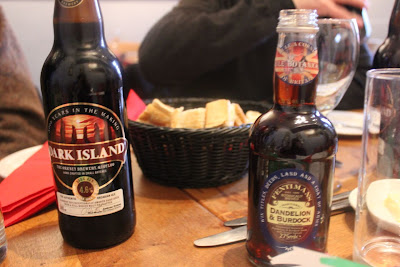 We made our orders.  E and his dad had the Dark Island beer from the Orkneys.  It had hints of chocolate and coffee, figs and dates and everything dark.  I chose a Fentimans Dandelion and Burdock drink.  When I hesitated about ordering it, the waitress said if I didn't like it I could order something else.  It was unusual.  Herby and floral and fizzy but not terribly sweet.  I found it very refreshing and interesting.

Then I ordered some bread for Sylvia, fearing that she would be starving after all the palaver of finding somewhere to eat.  The bread came out quickly.  I was pleased that they were flexible enough for me to order off the menu for Sylvia.  I thought she might eat some steamed broccoli and green beans.  I think she had a small piece of broccoli but not much more. 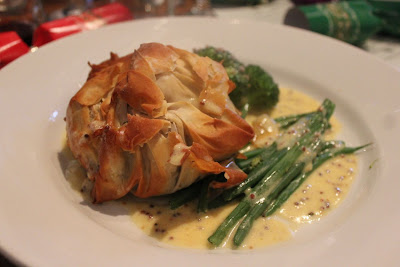 Fortunately the adults were delighted with our meals.  E and his father tucked into a Christmas meal of fried haggis balls followed by turkey escalope with pork and cranberry stuffing.  I chose a filo parcel of mushroom, butternut squash, red onion, pecan nuts and cranberries, served with green vegetables and a creamy mustard sauce.  It was excellent.  The filo filling was delicious but the star of the meal was the mustard sauce.  I also loved the green vegetables on the side. 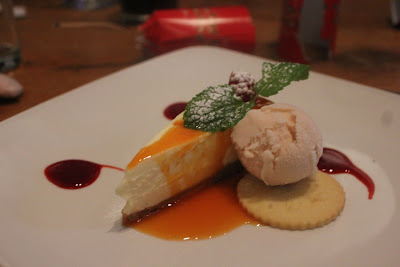 Regretfully, I decided to avoid the rich chocolate pudding and instead ordered the cheesecake with clementine sauce, rhubarb sorbet, shortbread.  The cheesecake was my lowlight.  It was more like a light fluffy cream filling with none of the dense cream cheese texture that I love about cheesecake.  If I liked cream I might have appreciated it more. However, I loved the rhubarb sorbet with the tang of fresh fruit and the shortbread was light as a feather. 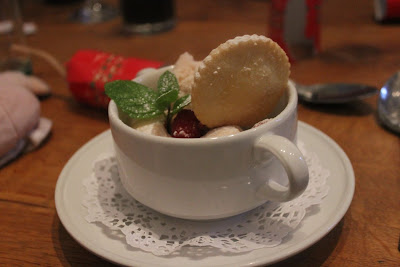 Again they made a special effort for Sylvia and served her rhubarb sorbet with shortbread.  She was very happy with her dessert, though there was more sorbet than she could eat.  E was very pleased that his coffee arrived with whisky fudge for everyone.  He was even more pleased to find he was the only one to want the fudge. 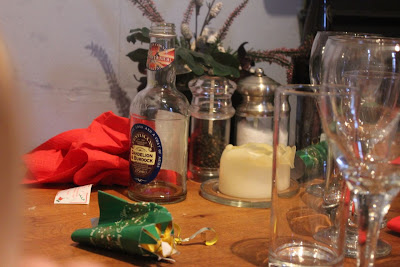 I really enjoyed our meal at Stac Polly.  They have a fantastic menu with a focus on local Scottish produce, which had made me interested in eating there.  I would return for the excellent service and great ambiance as well as the good food.  It was the perfect last meal in Edinburgh and lovely to share with E's dad.  We then walked up the High Street to catch our bus back to my father in law's place, sort out all our suitcases and call a cab to the airport.