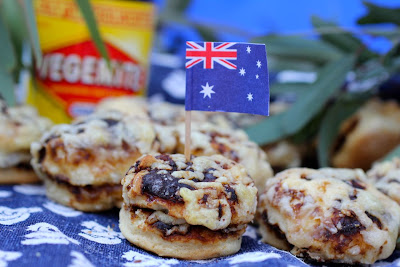 I found a forgotten cooler bag covered in Australian flags in our back shed today.  Leading up to Australia Day (26 January) each year, the shops are full of the the Aussie flag.  Hats.  Serviettes.  Paper plates.  Bandanas.  Thongs (footwear, of course!).  Bunting.  Even the groceries have flags all over the packaging.  Tomato sauce.  Olive oil.  Biscuits.  Tissues. Etc etc.

At this time of year I am filled with the need to make iconic Australian recipes.  Every now and again I wake in the night filled with horror that I have never blogged about lamingtons or sponge cake or pavlova.  Mind you I have blogged pumpkin scones, chocolate crackles, damper and ANZAC biscuits.  And I have told you of my lifetime of eating vegemite and promite.  Today I am sharing a recipe for cheeseymite scones that draws on Australian traditions of vegemite and cheese sandwiches. 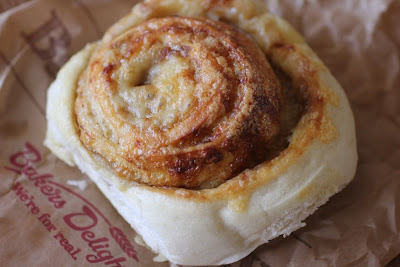 These cheeseymite scones were so good, I made them two weekends in a row.  The recipe came from Julie Goodwin in this month's Australian Women's Weekly.  I take my hat off to her for her simple approach to a fiddly recipe.  Before telling you about them, I thought I should show you (above) the Bakers Delight cheeseymite scrolls that Sylvia and I love. They are made by rolling up and baking yeasted bread dough with vegemite and cheese.  The result is a delicious fluffy savoury scroll. 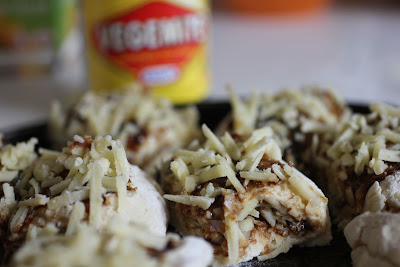 Cheeseymite scrolls are like a meal in a bun.  I have made cheeseymite scrolls with puff pastry.  They were delicious but I prefer bread to pastry.  I have been meaning to make a yeasted version, but am yet to get around to it.  Scones will do me just as well.  They are so much quicker than yeast.  I have seen scone versions of these sort of scrolls and it seemed a good idea but still fiddly.  The genius of Julie's recipe is that it requires folding rather than rolling. 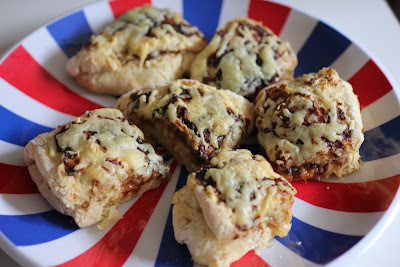 It is simply a matter of patting out the scone dough, spreading it with vegemite and cheese, folding it in two and spreading with more vegemite and cheese.  So easy.  So simple,  So brilliant.  I prefer my scones round but worried about the dough scraps if I cut out rounds.  So on my first attempt I cut the dough into squares.  When I tried round scones the second time I was pleased to find they worked fine.  I used recipe notes I had scribbled out of the Women's Weekly before loaning it to my mum.  As usual, I didn't follow instructions precisely. 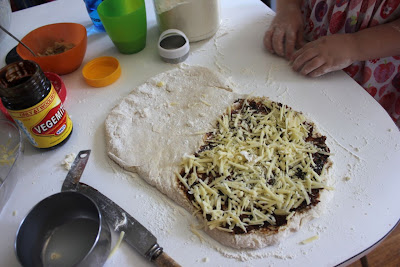 On my first attempt I spread the vegemite and cheese over the whole scone dough surface.  It them occurred to me that I was struggling to spread vegemite over such a large area because you only needed it on half the dough before folding it over.  I rubbed the butter into the flour rather than melting it but my mum says it makes them taste better.  That is probably why I usually make my scones that way. 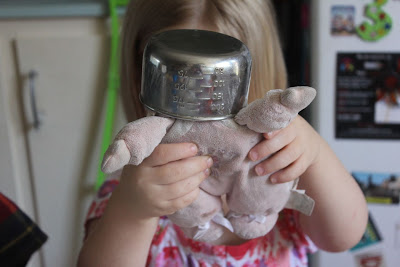 I also had some help from Sylvia and Dolly.  The dough is really sticky and soft.  Not for small hands to handle.  I let them both help to stir in the milk with a knife.  Dolly also had fun with a cup measure.  She reminded me of Saucepan Head in Enid Blyton's The Faraway Tree.  No doubt such practices would not meet health and safety standards in a commercial kitchen.  But it gave us a good laugh. 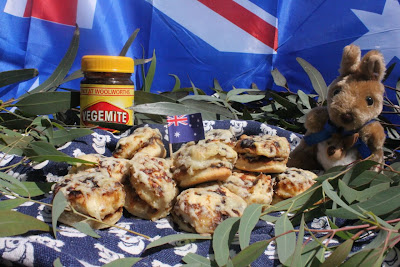 We ate the scones around the kitchen table for lunch when I first made them, took some to a friend's place and then nibbled on the leftovers.  The second time I made them was at breakfast time.  We ate them for lunch after a swim at the pool and then for dinner with some leftover salad.  Both times, they were compensation for having no fresh bread in the house.  I suspect they will become a regular recipe in our house.  We love them very much and they are so very easy. 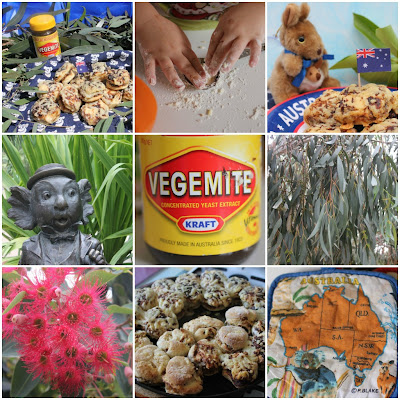 In honour of Australia Day I have made a collage of some Aussie images, quite a few of them from our visit to the Botanic Gardens last weekend.  (NB The gum leaves for my scone photos are from my local area.) Cheeseymite may well be a recent addition to the Aussie lingo but it is a flavour combination that has long been a favourite of Aussie kids. 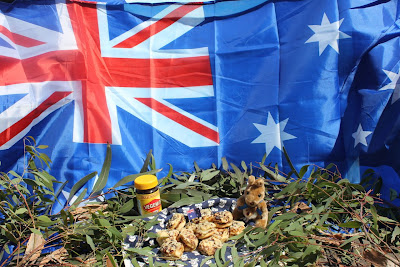 To celebrate Australia day you could hold a party with a backyard bbq and pool like my brother is this year, or go the beach and bush like we did last year or go to the Australia Day parade like we might this year.  Or you could just stay at home and bake these cheeseymite scones.  Washed down with a mug of billy tea.  It will have you yelling "Aussie Aussie Aussie Oi Oi Oi".

Lastly, I can't mention Australia Day without a note that it means different things to different people, particularly our First Nations people.  Aboriginal and Torres Strait Islander people once called it Invasion Day but lately I hear more reference to Survival Day.  In this spirit I will leave you with a moving excerpt from an Oodgeroo Noonuccal (Kath Walker) poem, 'A Song of Hope', that I heard in a few speeches late last year:

To our fathers' fathers
The pain, the sorrow;
To our children's children
The glad tomorrow

Preheat the oven to 220 C and grease an oven tray.

Place flour and salt in a medium to large bowl.  Rub butter into flour with your fingertips and then make a well.  Pour in milk and mix gently with a knife until it comes together in a sticky dough.  Sprinkle with flour and turn out onto a well floured surface.  Briefly knead until it comes together.  (Mine seemed too sticky both times but with a generous amount of flour it came together ok.)

Pat the dough out (making sure the surface below is well oiled), shaping into an approximate rectangle of between 1 and 1.5cm thickness..  Spread half with 1 tablespoon of vegemite.  (The dough is so soft that it is not easy - I found the best way was to dab blobs of vegemite over the dough and use a knife to sort of join them up.)  Sprinkle with half the cheese.  Fold the plain half over the vegemite and cheese half.  Spread the top with vegemite and sprinkle with the remaining cheese.

Cut out scones either using a scone cutter to make circles or a knife to cut squares or triangles.  (If making round scones, some of the scones made from scraps at the end will not have cheese and vegemite on top.)  Place closely together on greased tray.  Bake for 10-20 minutes (I baked mine for 20 minutes).  When cooked wrap in a teatowel until ready to eat.  Best on day of baking but keeps fine over night.

On the Stereo:
No Earthly Man: Alasdair Roberts
Posted by Johanna GGG at 23:38