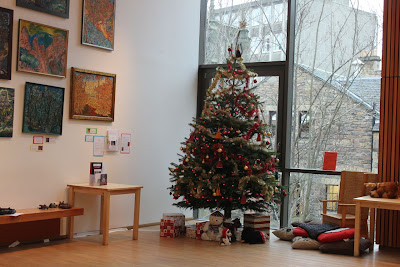 On our last trip to Edinburgh in 2009, we had cake at the Scottish Storytelling Centre.  At the time I had wished we had eaten lunch there.  Soon after arriving in Edinburgh late last year we took E's father to lunch there and returned again when E met an old friend for a coffee.  It is a fantastic place to take kids and has lots of interesting activities as well as a bookstore. 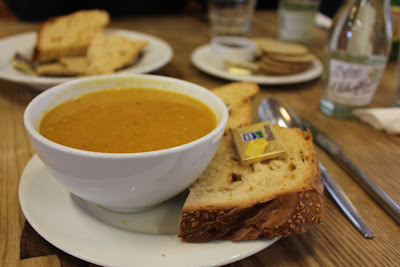 The menu at the Storytelling Centre is a simple one.  It is mostly sandwiches with a different soup and hot special each day.  The hot dish was not vegetarian so I chose the superb butternut squash, ginger and lemongrass soup (if my memory serves me correctly).  It came with lovely sundried tomato bread.  I ordered Sylvia a cheese salad (off the kid's menu) with a bread and oatcake plate.  She loved the oatcakes but didn't fancy the salad, despite it being fairly plain.  The bread was too bitsy for her.  E and his dad had the cottage pie and enjoyed it heartily. 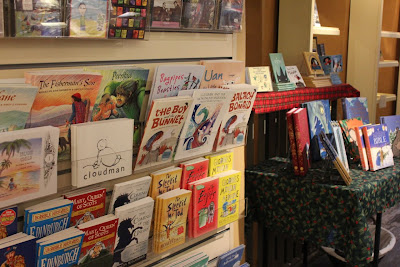 E's dad hadn't been there before and was very impressed by the food and also all the books.  He is a former librarian so he has a fine appreciation of books.  If you are seeking some children's books written in Scots or using Scottish slang, this is the place to go.  Titles include Katie's Coo and A Moose in the Hoose from Itchy Coo, and the Story of Clan Mingin and the Story of Clan McWee from GW Publishing. 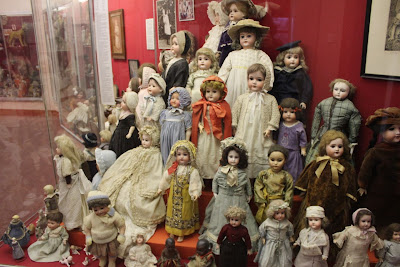 Last visit we went through John Knox's House which is entered through the Storytelling Centre.  This time, with Sylvia being a bit older, we decided to visit the Museum of Childhood just across the road.  It is a great museum with lots of games, toys, and more doll's than you can poke a stick at.  I think E really wanted to go there for the penny arcade slot machines.  His favourite is the Sweeney Todd one, where the man is seen to go to the barber and fall backwards into a baked pie. 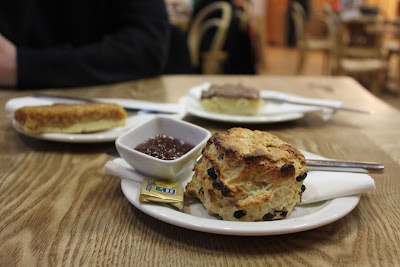 We had decided that we would head back for afternoon tea in the Storytelling Centre.  I chose the fruit scone, E had the treacle slice and Sylvia had the millionaire's shortbread.  All were wonderful.  I enjoyed having a taste of all of them but particularly enjoyed my scone.  It wasn't as toothachingly sweet as the two slices. 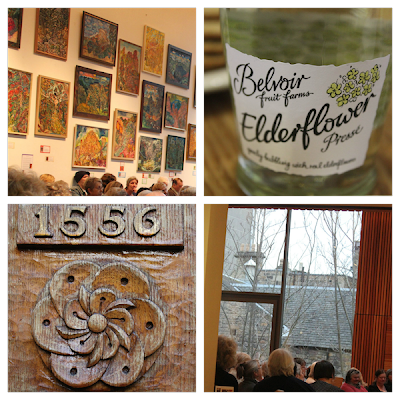 The real reason that we went back was because as we had eaten our lunch we had noticed them setting up seats by the cafe.  E had asked and found it was a ceilidh that is held once a month at the centre.  Drinking warm tea with a scone and listening to locals taking turns to sing (mostly) traditional songs was a joy.  We felt lucky to be able to immerse ourselves into the Scottish culture that is part of the local people's lives but is miles away from the Och-Aye-The-Noo Tartan Tourist culture on the Royal Mile. 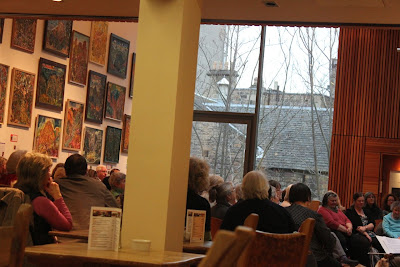 Days later we returned when E met his old friend.  It was a great place for him to sit and chat while Sylvia and I looked at Christmas tree and peeked in the story exhibition.  You can see this exhibition below with the little doors and peepholes that give glimpses of traditional Scottish literature.  It includes peeping into a scene from Peter Pan, opening a door to a moment between John Knox and Mary Queen of Scots, and even being able to pull a Maisie or Loch Ness toy out of little boxes. 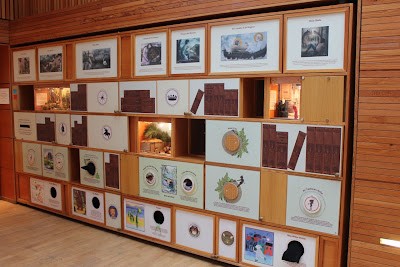 The Scottish Storytelling Centre is a fascinating place that encompasses both Edinburgh's oldest house (John Knox's) and a new purpose built Netherbow Theatre and Cafe area.  On this cold wet day, we were tempted to stay in the warm and welcoming cafe with an interesting pea soup on the menu.  Sylvia was even given a free CD by a kind lady.  Alas, our time in Edinburgh was short and we decided to leave and head out to Cramond instead.  [By the way, it is 40 C today in Melbourne and I would love to be back in wintery Edinburgh]