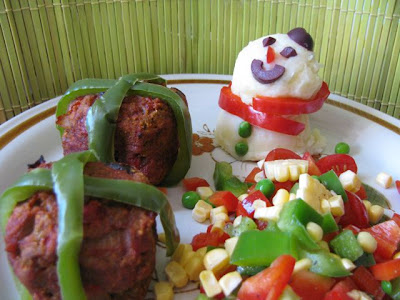 Christmas has come and gone and much good food has been set before me. I hope everyone has been enjoying the festivities. As it is the season to be jolly, I want to share with you the Christmas dinner I made for us on Christmas eve. I stumbled upon Wing-it Vegan’s ideas recently and couldn’t resist trying them.

The mashed potato snowmen were quite simple. What is it about mashed potato that makes creative Christmas food – stars and Christmas trees and snowmen! I was so excited by the idea I ran out to buy an ice cream scoop. River had used different sized scoops for the head and body but I could only find one. To make the snowmen I boiled some red capsicum till it was soft and wrapped around the neck easily. I cut a strip lengthwise and it wasn’t quite long enough – maybe I should have cut it around the body like peeling an apple. I used olives for the hat, eyes and mouth, red capsicum for the nose and peas for the button. 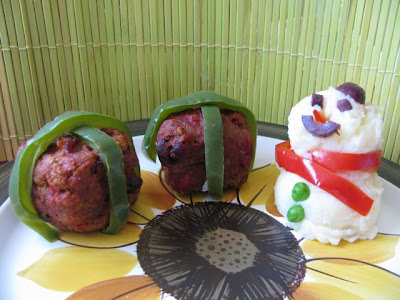 River made Christmas parcels from sausage crumbles. This is not something that we have in our shops – and even if we did I suspect I would still prefer a nut roast recipe. So you will not be surprised to hear that I created my own nut roast recipe, making it quite stiff so I could shape it into parcels. I used River’s idea of the glaze and capsicum “ribbons”. Mine wasn’t quite so pretty but they still looked cute and they tasted wonderful.

Fortunately I am quite partial to nut roast because I also had one on Christmas day with mum’s roast dinner. Dessert is becoming a lavish affair at Christmas with pudding, pavlova, rolled pavlova and chocolate mousse. I am an old fashioned girl who just loves a piece of pudding with custard. 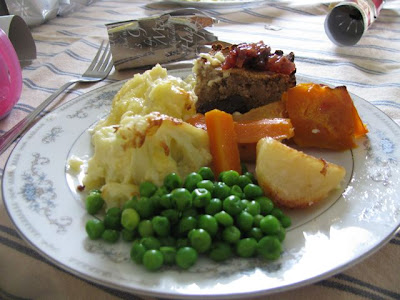 It was a good Christmas with lots of good food and good cheer. Sylvia got a new pram from Santa. It is actually for her dolly but she loves to sit in it. She also got lots of noisy toys – a talking doll, a train, books with musical buttons and even a jigsaw that makes animal noises. I guess the batteries will wear out eventually!

E and I managed to give each other the same DVD (30 Rock Series 2 because we enjoyed watching series 1). E also gave me an external hard drive and was grinning to himself on Christmas Eve when I found that my computer memory is full and needs some rigorous housekeeping. 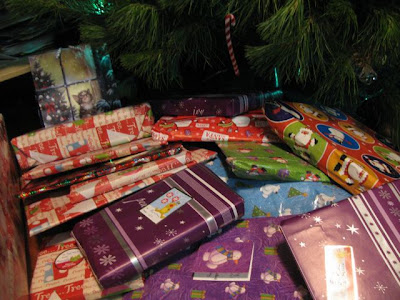 Below is my nut roast parcels recipe. I had more photos of them but I think my computer deleted a few just to warn me that I must delete more photos. But in my spirit of never deleting a thing, here are my notes that I made when I was thinking about making this nut roast. (But I ended up using what I had on hand):

Heat oil in a large frypan on medium high. Cook onion, carrot, red pepper and garlic until soft and starting to brown. I think this took me about 15 minutes.

Mix glaze and brush onto nut roast cubes. Bake at 210 C for 15 minutes. Flip cubes over and brush with glaze again. Bake another 15 minutes.

While nut roast parcels are baking, steam, boil or microwave capsicum until quite soft. I boiled mine for about 5 minutes and they weren’t done enough. So I placed them in a plastic bag and microwaved them until very soft.

When nut roast parcels come out of the oven, arrange strips of capsicum over the parcels like ribbon. Serve hot with snowmen and salad