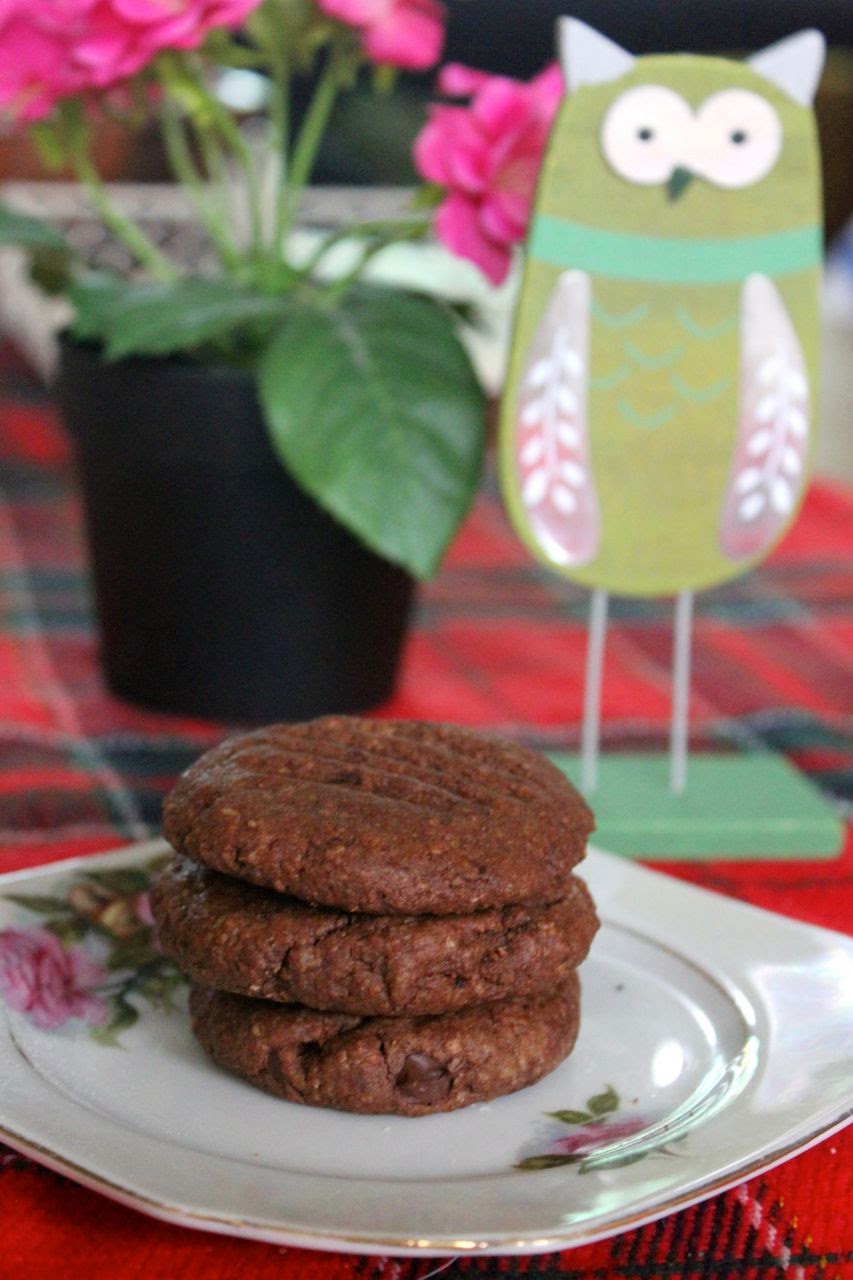 I haven’t posted many sweet recipes lately. I counted only five over the past three months. But I have been baking. Not all has been successful (such as the massive banana and blueberry bread that was uncooked in the middle). But I have had a little project to try some healthy choc chip cookies. Unfortunately I have focused more on taste-testing than photography so I will also share a few photos of buildings that have pleased me. 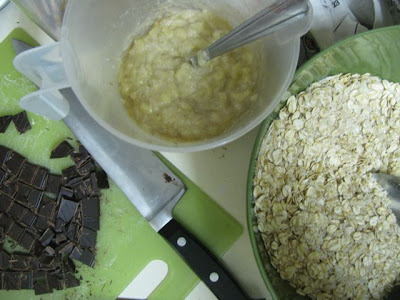 The photos of buildings were actually taken while Sylvia and I were on the northern city fringe on the day that I made banana choc chip cookies. It is not the first time I have made choc chip cookies with banana but this recipe from 101 Cookbooks interested me because the only sweetener was the bananas. 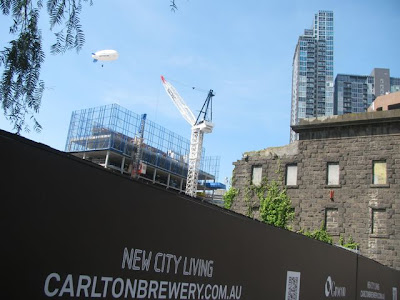 These cookies are nothing like a regular choc chip cookies. In fact none of these cookies are traditional. All are vegan and use ingredients that our foremothers would not recognize. Likewise, these buildings are modern. The above photo has a juxtaposition of the old and the new. It is taken at the Carlton United Brewery site that has stood derelict for years and now has become a building site. I imagine that the old bluestone buildings will be incorporated but will probably be an unrecognizable rendition of its former self. 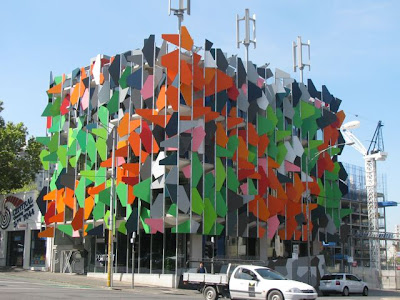 This colourful building has not a sign of a traditional building. It was only completed this year. The Pixel building is designed to be carbon neutral. It runs on energy generated by wind turbines and solar panels but most pleasing is that it can have eco cred and look so pretty. 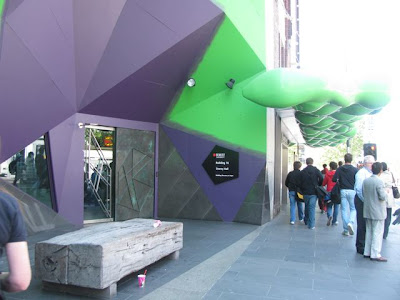 The other building that I couldn’t resist photographing was the RMIT Storey Hall, which was redesigned in 1995. I once sang in a choir in front of former Prime Minister, Gough Whitlam, in the auditorium there. I sometimes think of it when I pass by but I also love looking at the colours and design. 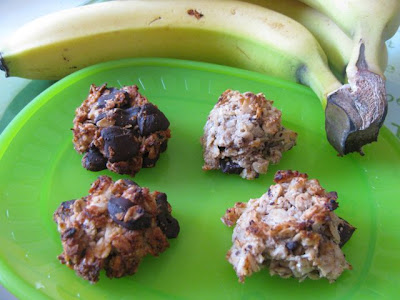 Yes I love buildings that are a little bit different and I also love biscuits that are a little bit different. Different is not always comfortable. I was a bit unsure if the banana cookies were cooked enough but cooking them a bit darker didn’t help. They were nice but quite moist and didn’t seem to last well past a couple of days. I even tried a batch with sultanas instead of choc chips so I could feed them to Sylvia but without the bitterness of the chocolate they were sweet and dull. 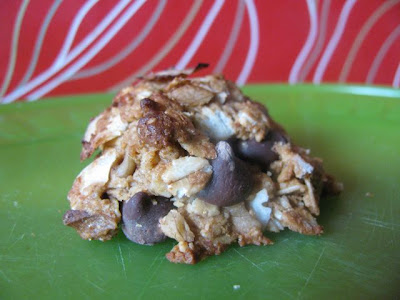 I also felt a little unsure of the Vegan Choc Chip Oatmeal Nut Cookies. I tried these one evening when I didn’t have any butter but I had almond butter on hand. I think I used too many oats and the flaked coconut was a mistake. They were nice but far more chunky than the pictures on the web. 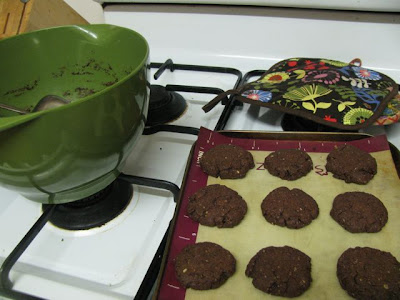 By far the most successful of these vegan cookies were the Chocolate Tahini Cookies. I found the recipe on a blog with the lovely name, A Dash of Compassion. Although I had tried chocolate biscuits with tahini before, I liked the simplicity of this recipe, which had far more tahini than my previous attempt. They were wonderful. Unlike the other cookies in this post, there were no oats, but the addition of LSA instead of wheatgerm resulted in a pleasing texture that was slightly grainy and a little melt in the mouth, with occasionally studs of chocolate. Definitely a keeper.

Combine bananas, vanilla extract and coconut oil in a large jug and set aside. Stir together the oats, almond meal, coconut, cinnamon, salt, and baking powder in a large bowl. Add banana mixture and mix till combined. Fold in chocolate chips. The batter might be looser than regular cookies.

Drop dessertspoons of mixture onto prepared trays with about an inch between each. Bake 12-15 minutes until browned. Let cool a bit before transferring from trays to cool on a wire rack.

Drop spoonfuls onto prepared baking tray. Bake about 8 minutes or until lightly browned. Cool 10 minutes and then transfer to wire rack to cool.

Chocolate tahini cookies
adapted from A Dash of Compassion
makes about 30 cookies
Mix dry ingredients in a medium bowl (except choc chips). Stir in wet ingredients and then gently mix in the choc chips until combined.

Drop teaspoons of mixture onto lined oven trays. Shape into smooth discs – I used my fingers, Nicole used the bottom of a glass to flatten them.

Bake at 180 C (350 F) for about 10 minutes. These cookies are too dark to spot any change in colour but Nicole suggests looking for slight cracking and drying on top. Sit for 5-10 minutes before transferring from tray to a wire rack to cool. Store in an airtight container.

On the stereo:
Fold your hands child, you walk like a peasant: Belle and Sebastian
Posted by Johanna GGG at 23:14