I mentioned yesterday that at our boys birthday celebration, I made gluten free vegetarian sausage rolls for the first time. It was quite a challenge! I was inspired by my mum who is more adventurous than me with her GF baking, living nearby the my GF sister and niece. She discovered a gf pastry made with mashed potato recently and raved to me about it. 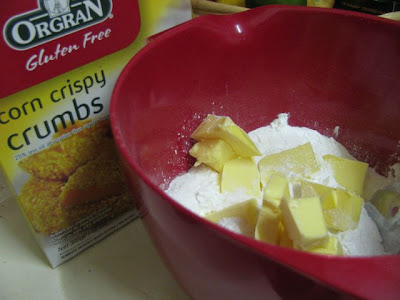 Vicki had made GF vegan sausage rolls (substituting tofu for cottage cheese and eggs in Cindy's recipe) a few months back for a potluck that I was lucky enough to attend. I wish I had paid more attention when I tasted these but I was rushing around with Sylvia and thought they tasted good.

She used corn crumbs instead of breadcrumbs and cooked quinoa instead of oats. So I decided to follow her lead but make them vegetarian instead of vegan. This worked well but my filling was a lot softer than usual, so it could be tweaked with less liquid or trying gf flakes instead of oats. She found gf pastry in the supermarket but I wanted to find a pastry I could make from scratch. 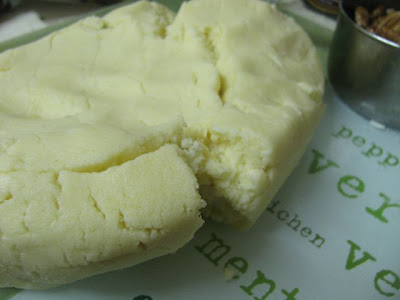 I made the pastry and filling the night before. The pastry came together in a soft ball but every time I tried to knead it it cracked. I didn't see the point in kneading it - though the recipe said 3 minutes - and put it in the fridge. I bought 500g of potatoes and ended up with about 400g of potatoes. Even with peeling the potatoes, it seemed I had lost some of my potatoes somewhere and E and I pondered where they had gone! 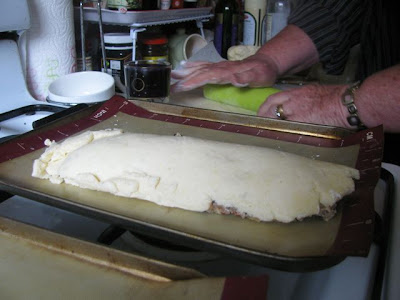 On the day of the afternoon tea, I was still considering rolling out the pastry when my mum and dad arrived. I suspect I was procrastinating after all the cracks the night before. My mum offered to roll out the pastry and I was only too glad to accept. It was difficult pastry to work with, especially for me who avoid rolling out any pastry for just this reason. Fortunately my mum is made of sterner stuff! 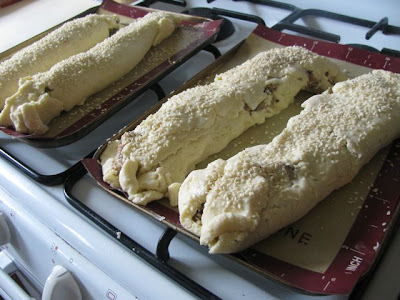 My timing with the sausage rolls was out but the end result, despite not being the prettiest dish, tasted good. It was my first time tasting this pastry and it is a good one. The raw dough was a bit sandy but the final result tasted great with the sausage rolls. Though there were puff pastry ones on offer that looked more handsome but no one complained about the gf ones. Both E and Sylvia enjoyed the leftover GF sausage rolls. 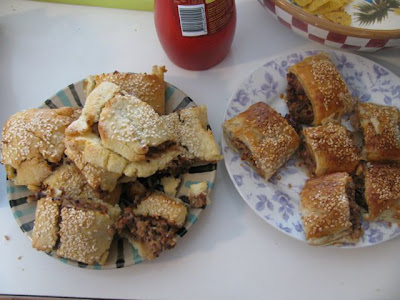 Susie enjoyed the sausage rolls but my GF niece Grace looked at them and screwed up her nose at the 'pips' (sesame seeds) and wouldn't even try them. Kids!

Ironically I have been wishing I had an alternative regular gluten pastry to make from scratch for sausage rolls. This pastry tasted good and I love the idea of mashed potato in them so maybe I could try these with wheat flour. My mum has also made it with Orgran GF flour. I'd definitely try it again gluten or not.

To make the pastry: Place all ingredients in a bowl and gently stir together with a butter knife until the dough comes together. (NB I had slightly less than 450g mashed potato so I added a little extra butter.) Dust surface with extra cornflour and knead dough till smooth – mine barely needed kneading to be smooth – certainly not the 3 minutes suggested by the recipe because it just kept falling to pieces. Wrap dough in clingwrap and place in fridge for at least 30 minutes. I left mine in overnight.

To make filling: Mix all ingredients together in a large mixing bowl. I made mine the night before and kept in the fridge.

To assemble sausage rolls: Cut pastry into four pieces. Place each piece between two sheets of baking paper and use a rolling pin to roll out a rectangle of about half a cm thickness. Peel off top layer of baking paper.

Spoon filling along the middle of the rectangle and then use paper to guide the pastry to roll it over the filling to make a long sausage. NB my mum has used this pastry before and still found it stuck to the paper a bit – she just scraped it off the paper when it did in large chunks. Place long roll on a baking tray lined with baking paper or silicone.

Repeat with remaining sections of pastry. (NB you could make more pastry or if like me you were catering to both gf and non-gf, you could use puff pastry sheets for the remaining filling.)

Brush rolls with milk or beaten egg and sprinkle with sesame seeds. Bake at 230 C (my oven is a bit underwhelming with power so you may need it to be a bit lower) for about 30-45 minutes. At about the 15 minute mark, take out the trays and cut the long rolls into individual sausage rolls and separate enough so they are cooked all over. When pastry is golden brown, they should be ready.

Serve warm. We had some that we reheated the next night (about 10 minutes at 200 C, I think) and they were lovely.

On the stereo:
Abandon Tracks!: Death in June
Posted by Johanna GGG at 22:27