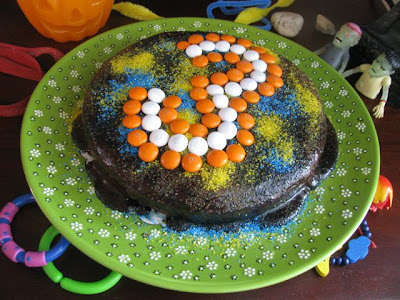 Yesterday we had a family gathering to remember the third birthday of my boys, Alex and Ian. There was lots of food. Most of the recipes are old favourites that have appeared on this blog before, though I did try a gluten free version of vegetarian sausage rolls that I will post about separately. At the end of the post is a recipe for a new pate because dips and spreads are great for sharing. 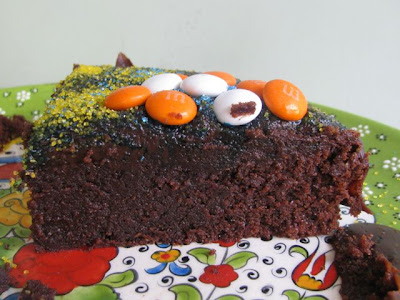 A birthday demands a birthday cake and I made one for my boys as you can see above. I baked a favourite cake - Jill Dupleix's flourless chocolate cake - and topped it with a chocolate ganache from here. The decoration was a collaborative effort. I intended to make neat lines of yellow and blue sprinkles but Sylvia offered to help and her style was more Jackson Pollock than Modrian. An emergency trip to the supermarket made me rethink the design and buy some orange and white m&ms to make the three. 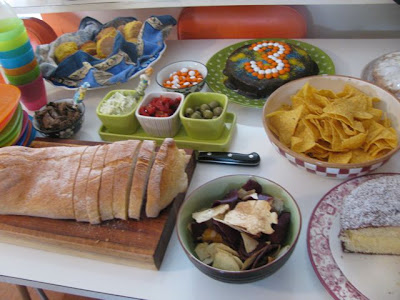 Other than the cake, I focused on savoury food. We had vegetarian sausage rolls, dips, olives, sundried tomatoes, chips, pumpkin scones. My mum brought a Dutch apple cake and gf chocolate cookies. My sister Fran brought along bread, lamington cake and drinks. My main problem with the food was making the gf pastry for the sausage rolls. Luckily my mum helped when she arrived but it meant that everyone was waiting for them longer than I had intended. Nevertheless, the food went down well. 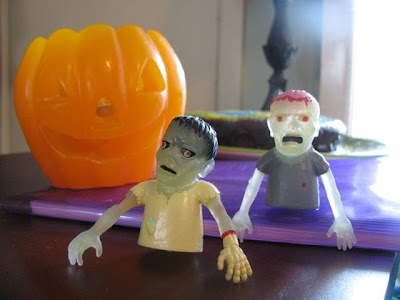 I wanted to make some Halloween recipes (such as witches fingers or eyeball cupcakes) but decided to keep it simple. I found an easy recipe for bat bites. Little balls of cream cheese rolled in poppy seeds with blue corn chips for the wings and olives for eyes. If I had been more organised to search for blue corn chips I might have made these. When the corn chips were not to be found in my supermarket, it just didn't seem worth the effort. 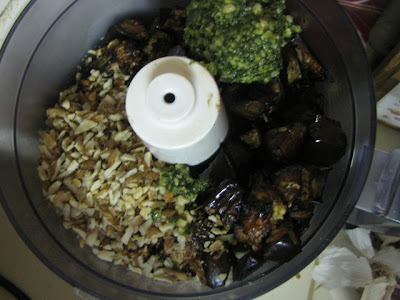 Instead of making bat balls I just stirred a spoonful of pesto into some cream cheese and served it as a dip. I then concentrated my efforts on making an eggplant pate. I roasted the eggplant and toasted the walnuts and blended it all into a thick paste which took some time. Oh the irony that the cream cheese dip was more popular than the eggplant one. 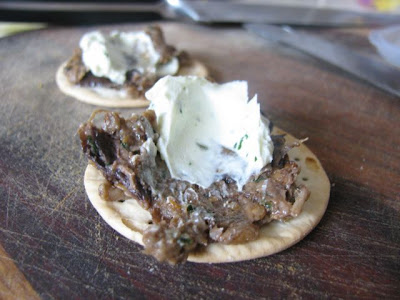 Ever the intrepid food scientist, I discovered that the eggplant dip paired rather well with the cream cheese one. We had leftover sausage rolls and dips for dinner tonight. I enjoyed the eggplant dip more tonight than I did yesterday. Not sure why. Maybe it was better with dry biscuits and sticks of capsicum. The Flora cookbook that I used suggested serving it as part of a platter and I think I would pay more attention to the accompaniments in future. It is a dark and intense pate, though I think more pepper wouldn't have gone astray. It is a nice change from baba ganoush. 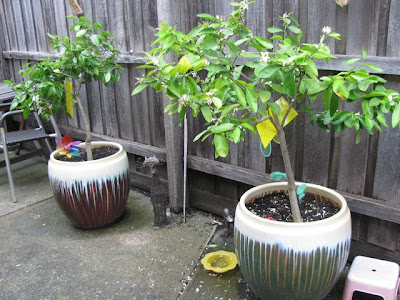 The last couple of years we have sat outside in the sunny backyard at this time of year but this year, it was unseasonably cold and wet. Melbourne had a soggy end to the wettest October in 35 years. After constant rain on Saturday, we set up the food inside. But a bit of rain didn't dampen the occasion. It was great to have my family there and we had a fine afternoon.

Cut eggplant into 1.5cm dice and toss with oil and vinegar in a roasting dish. I used two roasting dishes to make sure the eggplant had room to roast rather than clustering too closely together and steaming. Roast for 30-60 minutes until eggplant is soft. Lightly toast the walnuts – I did this in a dry frypan on the stovetop.

Place eggplant, walnuts and pesto in a food processor and blend til smooth. This took me a while and I had to scrape the bowl down a few times. It makes quite a thick pate. Season to taste – I added about ¼ tsp of salt and quite a bit of freshly ground pepper.

On stereo:
Believe: Katherine Jenkins
Posted by Johanna GGG at 21:53