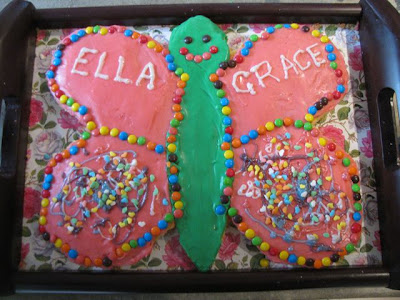 It was my nieces' 6th birthday on Sunday. We went to my mum's on Saturday to help make the birthday cake. Before a birthday cake is made there are many decisions to be made. A butterfly was chosen so there was a wing each for Ella and Grace but then we had to decide on the shape, the colours, the decorations. Fortunately we held a cake committee in the lounge room with Quin playing background music on the piano. 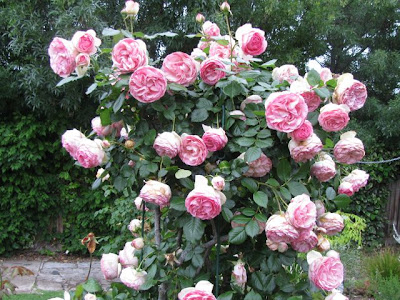 My mum made a gluten free cake (using two rectangular slice tins) out of a packet so that Grace could eat it. Both girls loved the soft butter cake and stroked it lovingly like a dog. The butterfly was an easy decorating job to do with kids. Ella and Grace were helped by their sister Maddy and oldest cousin, Quin. We were all very happy with our handy work! 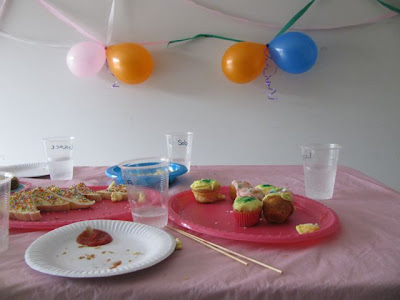 The party was lots of fun. Despite the wintery weather, my sister, Susie, took a chance on getting a blow-up jumping castle in the back yard and the rain held off just long enough. I didn't get a photo of the food till it was demolished by the kids but there was lots of traditional kiddie party fare: sausage rolls (with veg option for Sylvia and me), fairy bread, little cakes, and chips. There were also some fancy skewers of watermelon, strawberries and marshmallows - and face painting, party games and lolly bags to take home. What more could you ask for! 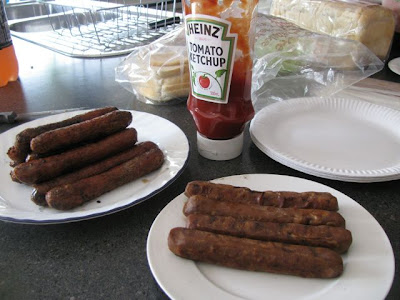 Not only did we enjoy a great party, but we also had birthday cake for my brother Dave and a barbecue. Those are the vegetarian sausages at the front. A busy weekend of birthdays! And now let me tell you how we made the butterfly birthday cake. (You can also check out a previous butterfly cake I made for an alternative look).

How to make a butterfly cake: 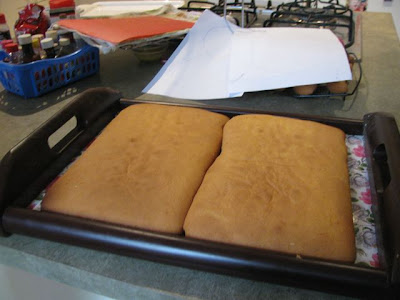 Firstly, after the cake committee had met, we took the two cakes and set them side by side on a tray. I would have preferred a large flat tray, such as my biggest baking tray which I sometimes cover in foil for birthday cakes, but my mum's largest tray was this pretty wooden one. 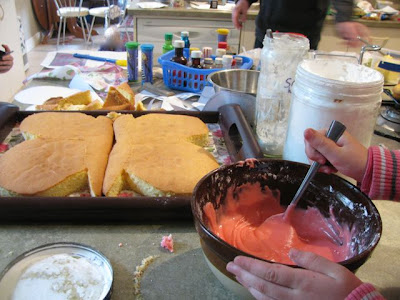 Next we found a butterfly shape we liked on the web. To make a template, I copied one side of this onto a piece of paper that was the size of one side of the cake. This could then be flipped over for the other side rather than trying to draw two identical sides. I cut the wing shape out. Mum held it down while I used a sharp knife to trace the outline onto the cake on both sides. Then I cut out the butterfly shape.

Then it was the fun job of mixing the icing (or frosting). We used liquid dyes. I was excited to find my mum had bought a red pillarbox dye. Red is difficult to do in icing but this dye made a lovely bright pink. Grace and Ella helped with the pink. Maddy and Quin worked on the green icing for the body of the butterfly. (Maddy was concerned at an alternative to pink for the boys at the party.) And Sylvia? She sat on the floor trying to put my shoes on while we worked. 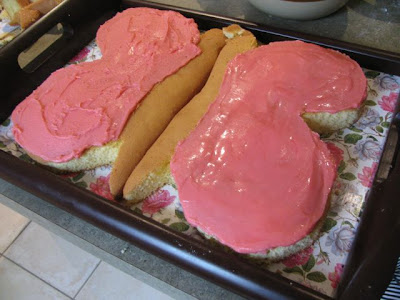 I insisted that I do all the icing because it is tricky work. Once it was spread over the cake, I used a butter knife dipped in hot water to smooth the icing (you can see one wing smooth and the other choppy in the above photo). Unlike most novelty cakes I make, we decided not to ice the sides of the cake, which made it easier though I was concerned that it would dry out quicker without the icing to help keep the moisture in. 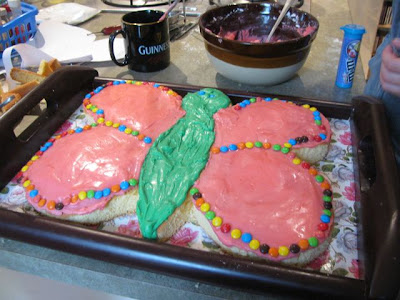 With the icing in place, the girls helped to place mini m&ms around the edge of the wings. The cake we liked had piping around the edges. However I love colourful lollies and they are so much easier for kids to handle than an icing gun. My mum also had some glossy icing pens from a previous cake. I used them to write Ella and Grace's names. Then the girls took control of the pens and artistically drizzled the icing and little love hearts over the lower parts of the wings.

Warning: Even after a few hours the icing from the icing pen was quite moist. When my mum tried to cover it with cling wrap, the icing clung to it and I had to do a patch up job on the writing! 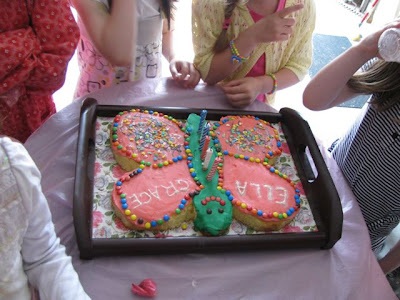 We also did a face of m&ms but I forgot the feelers in the chaos. I had intended to make some out of liquorice (though pipe cleaners would also do the trick). The cake was a great success at the party. Susie lined up the candles along the middle of the butterfly. The biggest challenge on the day was keeping the candles alight outside long enough for the girls to blow them out. Eating the cake was no challenge at all for the hoards of kids!
Posted by Johanna GGG at 21:13