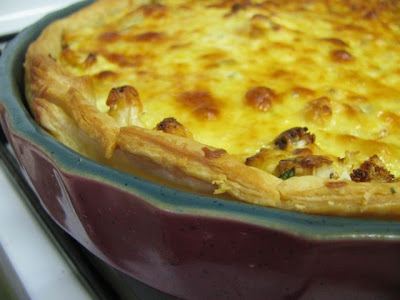 At my nieces’ party last weekend I was telling some of the kids that Sylvia loves vegetables. They all made a face when I said she loves broccoli. An eight year old told me that she only eats three vegetables: potato, corn and carrot – and she only likes carrot when crunchy (or maybe when it wasn’t crunchy). It sounded quite limited. I know that kids can go through phases when they reject foods they previously loved so I am relieved to see Sylvia can still enjoy new vegetables.

Sylvia generally eats vegetables and beans or tofu or cheese for dinner. I keep offering her new foods that we are eating but she also is curious about what is on our plate. When I made Deb’s Cauliflower and Caramelized Onion Tart last week, I was surprised how much Sylvia loved the roasted cauliflower. She wouldn’t eat the tart but I am just glad she eats vegetables. So a few days later I steamed some cauliflower and she couldn’t get enough of it. 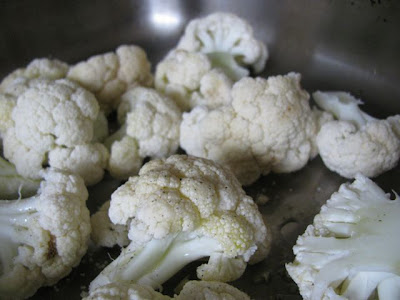 She is also doing well with seasonal foods. It is the time of year when I eat a lot more tomato, cucumber and asparagus. Sylvia is also enjoying these vegetables. And tonight when I had some nectarine in a fruit salad, she was eager to gulp that down too. Big sigh of relief!

But it is not just Deb I must thank for the cauliflower recipe. I saw her pie and with all the marscapone cheese and truffle oil, it seemed a bit beyond me. Then I saw Carla make the same pie with a simpler vegan version. I actually felt that the vegan version was lighter and set out to make mine with less dairy. However I just couldn’t find the soft tofu and so I settled for cream cheese. I have seen versions with cottage cheese or ricotta which might be a better substitute. 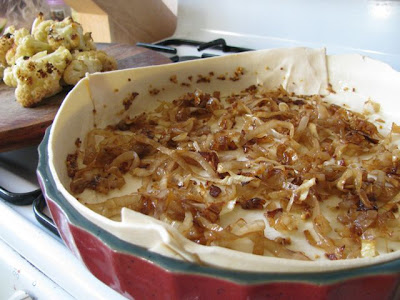 I used my biggest pie dish which helped the filling cook but the puff pastry I used was a bit undercooked. The preference would be to try the home made pastry that Deb used but the reality that finding the energy for that is probably a bit much at the moment. I probably would bake the pie a bit longer with puff pastry next time. 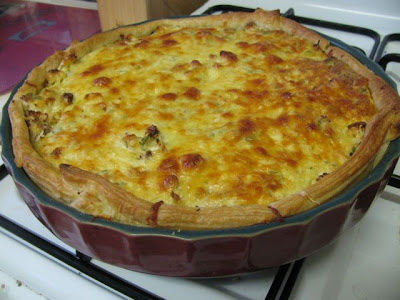 Pastry woes aside, the tart was like a very cheesy quiche. In a very good albeit rich way! It is not the first time I have cooked cauliflower in a tart and I will definitely be doing it again, Despite its lack of colour, cauliflower is full of flavour. I love a large tart that means I come home to a leftover piece of pie packed with vegies and topped with lots of cheese. 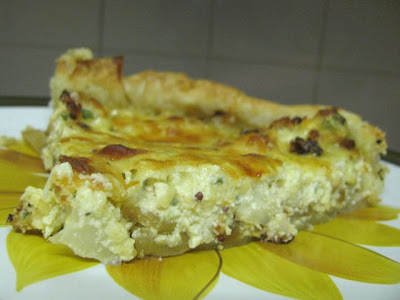 I am sending this tart to Haalo from Cook (almost) Anything for Weekend Herb Blogging (#260) which turns 5 years old this week. Congratulations to both Kalyn (who founded the event) and Haalo (who has taken over the reigns with such aplomb) for 260 weeks of bringing bloggers together over plant-based recipes.

Roast cauliflower with 2 tbsp of olive oil and a pinch of salt in over for about 30 minutes at 425 F (about 210 C) or until soft and starting to brown at the edges. Cool cauliflower and chop roughly.

Line greased pie tin with pastry. If appropriate, blind bake for about 20 minutes. NB I used puff pastry and didn’t pre-cook it. It didn’t quite cook as much on the bottom as I would have liked but was perfectly cooked at the sides. Maybe it was because my pie tin is ceramic rather than metal. Deb gave a recipe for a home made crust she recommended that seems a good idea if you have the time.

Heat remaining 1 tablespoon of olive oil in a heavy frypan over medium heat. Slowly fry onion in oil until golden brown and soft. Deb suggests 30-40 minutes. I suspect I took even longer because I was giving Sylvia dinner as I was preparing it and lost track of the time. Season onion.

Bake for about 40 minutes at 180 C (350 F) or until top is golden brown and filling is firm to touch. (Maybe try a bit longer if you use puff pastry.) Sit for about 15 minutes before serving.

On the Stereo:
Ballads: Moody Blues
Posted by Johanna GGG at 22:26