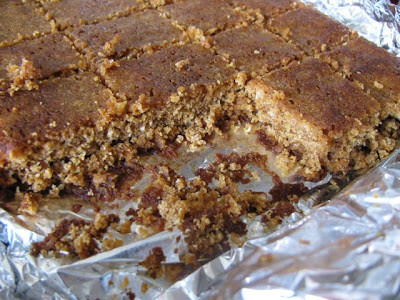 When I worked at the BBC, I remember Vic and Bob of zany Shooting Stars fame having a silly list of things to do. One stuck in my head: if you see Michael Parkinson on a cold day you could say to him, it’s parky Parky. This comes to mind when I see the word parkin. I also think of Yorkshire housewives in floral housecoats and hair in rollers serving up home-made afternoon tea.

While these words bring to mind images of yesteryear, they still have currency today. Parkinson has retired but is still revered, ‘parky’ is still used in the UK to refer to cold weather (I even heard Billy Connolly saying it last night on Journey to the Edge of the World on TV), and parkin is an evocatively named old fashioned treat which continues to be enjoyed today (I was recently given a box of Rennie Macintosh cards with recipes on the back including parkin).

I intended to post this yesterday because, although Wikipedia said it is traditionally made on Bonfire Night in the UK, it seemed an appropriate treat for ANZAC Day. But I just didn't find the time. Last year I posted about the traditional ANZAC biscuits. 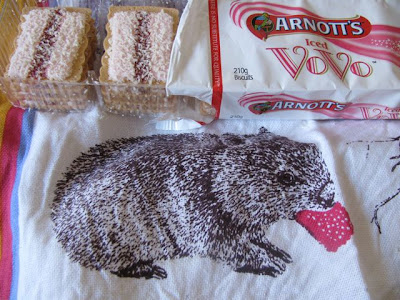 So this year I thought I would post about Iced VoVos, an iconic Australian biscuit that was in the news last week because the manufacturer Arnotts threatened legal action against Krispy Kreme's Iced Dough-Vo. I felt a surge of nationalistic pride and was annoyed at this American donut giant using one of our biscuits to sell their products. But then I checked out Arnotts, I found the company is now American-owned. I then bought a packet of the biscuits out of curiosity and found they were not the marshmallow and jam biscuits I had been thinking of. Sigh! The best thing was digging out the wombat teatowel and finding the picture of a wombat eating an iced vovo – (if you don't look too closely)!

More successful was my experience of baking a Rose Elliot recipe for honey parkin a few weeks back. I had another burst of nostalgia while mixing it up. The buttermilk swirled through the molasses was so pretty and reminded me of a book I read as a child in which the main character had a drink called tiger milk which was molasses swirled through milk. It sounded alluringly exotic back then when I had never seen molasses, although now I am not sure I would fancy the taste of the drink. 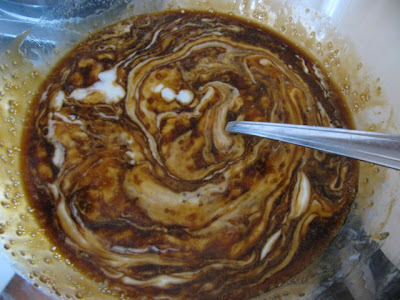 Even more pleasing and curious was the strange chemistry at work in this cake-cum-slice. The mixture to go in the oven was a pleasing caramel colour that became a golden brown when baked. When it came out of the oven it was strangely devoid of smell. But even after a few hours the heavenly aromas of ginger and honey were wafting up from the parkin. The recipe said that it should be wrapped and stored in a tin for 2-7 days first. So I wrapped it in foil and a teatowel, made another cake to save me from temptation and I waited. When I finally opened it and had a piece, it was quite dry and disappointing. (I wonder if it would have been better if I had kept it in an airtight container for the week when it was wrapped in foil?) Nevertheless I took it out of the foil, cut it into pieces and put it in an airtight container.

After a few more days it was wonderfully sticky and moist with the mellow flavours of ginger and honey. It reminded me a little of the Orkney Ginger Broonie that I made last year. The parkin was more of a slice than cake and was nicer because it was much stickier than my broonie.

I enjoyed slowly eating my way through it. The parkin just got better and better the longer it sat there (umm… about a week). E was not so keen. He said it was ok with a cuppa in the afternoon but would not do for an evening snack (which makes me think of the Scottish saying ‘Wha’s like us? Damned few and they’re all deid.’) My mum and dad both thought it delicious. It felt a little healthier than some of my cakes and had a depth of flavour that I loved. 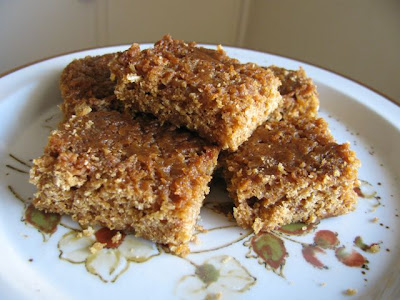 Jeanne at Cooksister is hosting this month’s Waiter There’s Something in My … Retro Classics (closing date 4 May). I am sending this to her because it is indeed a retro recipe which has been enjoyed for many generations.

Place sugar, treacle (or molasses), honey and butter (or margarine) in large saucepan and melt gently over low heat. Alternatively, you could place in a large microwave proof bowl and melt in microwave which is what I did. The recipe says to cool this mixture but I didn’t bother. Add milk gradually and stir to mix. Add remaining ingredients ad mi til combined. Pour mixture into prepared tin.

Bake 50-60 minutes or until firm to touch. Turn out of tin and cook on a wire rack. Ideally store in foil and stored in a tin for 2-7 days before eating. It keeps getting better with age.

On the stereo:
Chill with Bach
Posted by Johanna GGG at 13:28