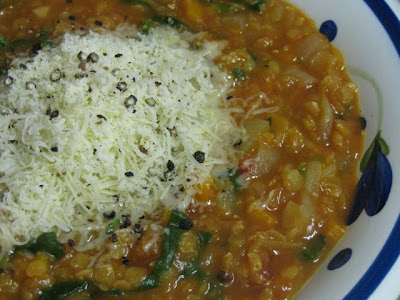 The only time I went to a Tupperware party was when I was about 20 years old. My mother advised me not to buy anything because you could always buy the same thing cheaper elsewhere. I do own a few choice pieces of Tupperware today but I do appreciate my mum’s wisdom. Everyone at the party was given a present of a square of rubber with which to open difficult jar lids! I promptly lost mine but since then have often used my washing-up rubber gloves to open recalcitrant lids.

I tell you this because I have had some lids lately that were out to defeat me (and E). One was on a new jar of coffee granules. The design of the lid seemed to be a triumph of style over substance. After a lot of effort, I managed to get it off with the help of my rubber gloves. Upon the lid loosening, the coffee jar flew out of my hands and hit one of our coffee mugs which ricocheted against the oven and the handle broke. Now that is strong coffee! 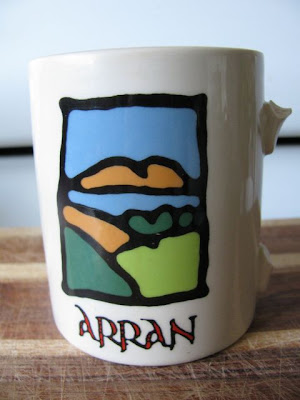 The mug in question (and in the photo) is a souvenir from the Isle of Arran. We bought it on holiday to the island off the south west coast of Scotland many years ago when we were living in Edinburgh. It was a trip we have always remembered fondly. We were there during the Arran Folk Festival and caught a bus to a gig – on the trip home we remember a lot of local kids singing folk songs. We hired bikes to ride to a stone circle and were amazed that the bike hire place didn’t ask for any contact details from us. We spoke to our B&B owner the following day when he was laughing at the idea of a car alarm and he replied that it was an island and no one would get far if they stole a car or bike. It seemed a place of wonderful innocence as well as castles, excellent veg fry-ups for breakfast, goat skulls on fences, and seals. So we were both sad to lose a little reminder of the holiday.

The other recent experience of using my rubber gloves to remove a difficult lid was when making a tomato lentil soup. I was inspired (as always) by Holler and Lisa’s No Croutons Required Event. The theme this month is Tomato. After unsuccessfully seeking an interesting tomato soup recipe, I created one from what I had in my fridge and pantry. I added a generous amount of smoked paprika which seemed a little strong. I decided that maple syrup would tame it nicely at the same time as complementing it with the smoky sweetness.

There are times I use maple syrup a lot and other times that the bottle lingers. Obviously it hasn’t been used much lately because the lid was stuck in place with crystallised syrup. Once again the trusty rubber gloves helped to loosen the lid – not before I had despaired of ever opening the bottle again. I was glad I did and have been using maple syrup a bit more lately. 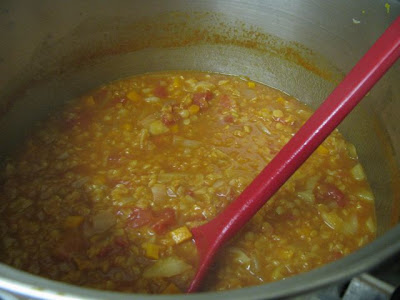 The soup was a great success. It didn't take much longer than 30 minutes to prepare. E pronounced it to be a ‘smashing soup’. It was smoky with a touch of sweetness. The tomato was the main vegetable but, with lentils and a few other vegetables, the soup was hearty enough to be a substantial and satisfying meal served with a slice of bread.

However, not only did Holler request that we make a tomato soup but also that we devise a menu to celebrate her birthday. The menu for me is obvious. I would serve smaller bowls of the tomato lentil soup, followed by nut roast and chocolate cake (both of which I have posted lately). I am sure Holler would happily partake in such a comfort food menu.

Heat oil in stockpot. Fry onion, cabbage, carrot and garlic for about 10-15 minutes or til soft. Add remaining ingredients. Bring to the boil and simmer for 15 minutes or until lentils are soft. Turn off heat and stir in spinach. Serve topped with a spoonful of parmesan cheese and freshly ground black pepper.

On the stereo:
Son of Evil Reindeer: Reindeer Selection
Posted by Johanna GGG at 16:29