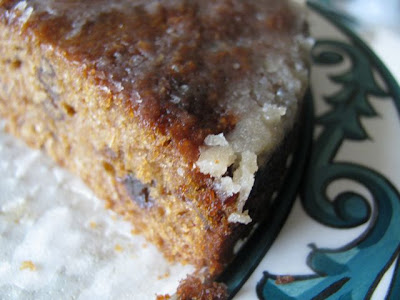 I have been told that my gluten free niece was discovered eating a Krispy Kreme donut recently even though she knows they are full of gluten – and she paid for it with a sore tummy later. Poor celiac kid! Is that really the most tempting form of gluten? What about a great sourdough bread, a good chocolate cake or a piece of soft sweet prune cake? Prune Cake, you ask!

Now you might turn up your nose at the idea of prune cake but this Sticky Prune Cake is really one of my favourite recent cakes. I would highly recommend it to my niece if she wanted to break her diet because not only does it taste fantastic but the glaze is just like Krispy Kreme donuts. 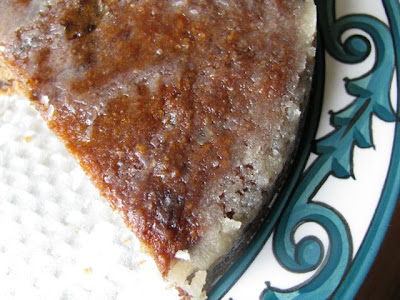 I have had this recipe for years and always imagined it would taste a bit like a sticky date cake. A few weeks back I finally made it and found that it was quite different but equally excellent. I expected the topping to be like a syrup but instead it was like a thin icing that cracked when cut. I am no fan of Krispy Kreme donuts but the topping was just like their glaze – only better, of course because it was on top of a moist soft cake studded with pieces of prune.

I am a little wary of recipes with wholemeal flour especially when there is not much in the way of a raising agent. In fact I would have used self-raising wholemeal flour if it had not been infested with weevils. For once in my life I was glad of the weevils because they made sure I followed the recipe to the letter and it was one of the softest cakes I had had for ages (spongy rather than light and airy). 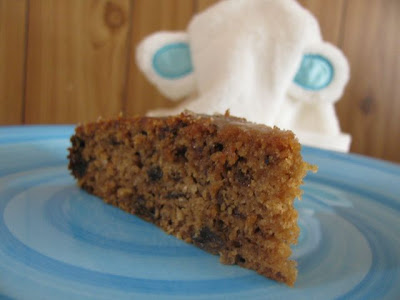 Prunes have such a bad reputation as healthy food for old folk (to keep them regular) but they are so delicious that of course the cake tasted fantastic. E was a fan and so were a few visitors. Yavanna almost said no because she was wary of a cake with prunes in it but was glad she tried it. (She brought Sylvia the snugly hat in the photo.) My sister, Susie, enjoyed it, although she wasn’t sure about the fruit in it but said it was better than a traditional fruit cake. In fact, I would claim that this is a cake to make again and again, to impress visitors and tempt celiacs!

Preheat oven to 180 C. Grease and line a 23cm round cake tin. I would advise using a springform tin if possible.

Place prunes in a small saucepan and cover with water. Bring to the boil and simmer for about 12 minutes or until tender. Drain and chop. (I just did this roughly with scissors.)

Place eggs, sugar and oil into a large bowl and whisk to combine. Stir in prunes and buttermilk. Sift dry ingredients and add to prune mixture (I didn’t sift).

Pour mixture into prepared cake tin and bake for 30-45 minutes until skewer inserted in the middle comes out cleanly.

Topping:
Place sugar, buttermilk and vanilla essence in a small saucepan. Cook over medium heat until sugar has dissolved, stirring frequently. (I did this for about 5 minutes but not sure it was long enough.) Prick warm cake all over with a skewer. Spoon topping over cake and cool completely in a pan.

On the Stereo:
Nada: Death in June
Posted by Johanna GGG at 22:01