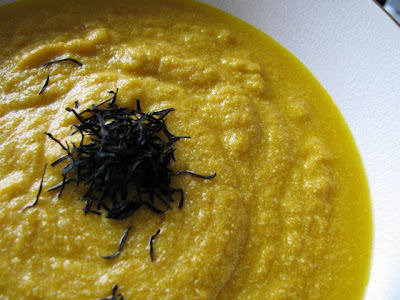 There is nothing like a kitchen disaster to make me appreciate it when a soup works. I chanced upon one of my older Vegetarian Times magazines (January 2009) and was inspired by some of the recipes.

The first recipe I attempted was a Tomato Quinoa Soup. It seemed a great way to use up some of the quinoa lingering in the pantry til I discovered it was infested and I had to throw it out. (A word of advice: don’t ever attempt to empty a cup of quinoa into the bin while holding a small baby – if you miss the bin, the grains roll everywhere!)

While Sylvia slept, I found myself cleaning out the shelf in the pantry containing all the bags of grains. A few grains had to be thrown out and a few had to go in the freezer to discourage any wayward weevils. The resulting soup had brown rice and the remainder of a bag of millet grains and reminded me of last year's Four Grain Tomato Soup – possibly because it was so stodgy. I didn’t even bother to take any photos of it. But I did take a photo of my grains shelf - this is the photo after it was cleaned up so you 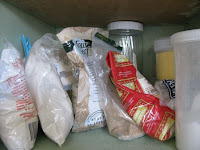 can imagine it was pretty bad before I cleaned it.

However, a few days later I tried another soup from the same magazine. The Carrot Miso Soup was unusual but delicious. It interested me because, although I am not keen on the idea of carrot soups, I was attracted to the interesting Asian ingredients.

I made some changes. I added an apple because it was there and some tofu to increase the protein. Next time I might be inclined to reduce the agave because I found myself needing to add a bit of tamari to reduce the sweetness. Unfortunately I forgot to add the rice nor could I find a leek in the supermarket. The recipe also called for wasabi peas as a garnish but I chose to add a little chilli to the soup and garnish with arame because I have always thought carrot and seaweed go together well.

I was delighted with the result. I didn’t think that the kombu gave a strong flavour but the miso, rice vinegar and tamari imparted an ever so slightly sour taste. It still as also on the sweet side but very tasty. And I loved the additional texture of the thin strands of arame mixed through it. Not only delicious, but it is also a healthy, low-fat soup. (I am a bit confused if white miso is gluten free - I think so and have labelled it gluten free but please let me know if it isn't.)

I don’t think it was E’s idea of a meal and I ate most of it for lunch. But we did have some as sauce over a nutroast, which we both enjoyed. It is good to feel I am getting some value for my VT subscription - makes me think I should find some other archive copies of the magazine and use more recipes.

Fry the leek (or onion) and garlic in oil in a large saucepan for 5-10 minutes until soft. Deglaze pan with rice vinegar. Add carrots, tofu, apple, rice and kombu. Bring to the boil and then simmer for 30 minutes or until carrots soft. Remove kombu. Use a handheld blender to puree til smooth (this took me a little longer then usual to blend the tofu). Place a ladle of soup in a small bowl and mix in miso til smooth. Add to soup. Add agave, chilli paste and tamari to taste. Stir well. Serve warm with a spoonful of arame on the soup.

On the stereo:
Singles: New Order
Posted by Johanna GGG at 15:17