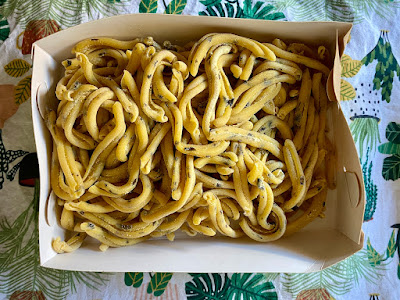 The spring has sprung, the grass is riz and life feels like I'm on the whizzy dizz!  (I remember being a child and yelling about the whizzy dizzy at the playground and I think it was one of those things that you jumped on and spun around until we were dizzy!  I can't find it on Google.  Anyone else know this term?)

I am glad it is September with warmth and green shoots of hope.  August has been a crazy month. Not all bad but it has been intense.  Lots of rain.   National Science Quiz (online in the comfort of my home).  First swim in an outdoor pool (or any pool) for months.  Being inspired by Jane Goodall's talk (I was in the audience, she was on the screen) at the Museum.  And I accepted a new job.  Same employer, different department!  I am looking forward to the change!

Above is seaweed pasts from South Geelong Farmers Market, made with kelp from Torquay Beach.  I am yet to cook it but am intrigued.  I went to Geelong for Fathers Day on the weekend. 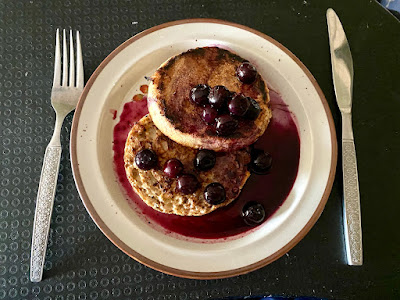 One morning Sylvia woke me early to serve me a fancy breakfast in bed before work.  We were out of bread so she used muffins to make french toast which was served with blueberries and maple syrup. 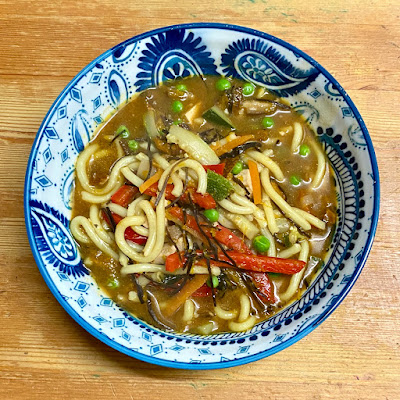 I needed vegetables so I made miso soup.  My miso soup.  I know that Japanese miso soup is traditionally a very thin broth to be had in a small bowl with a few pieces of firm tofu and greens.  But I make miso soup with lots of vegetables, noodles and chunks of tofu.  It is my version of chicken soup.  Such great comfort food. 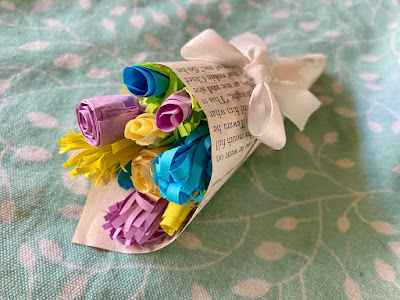 The internet gave Sylvia a bouquet of post-it notes flowers.  Well, it showed her how to make it. 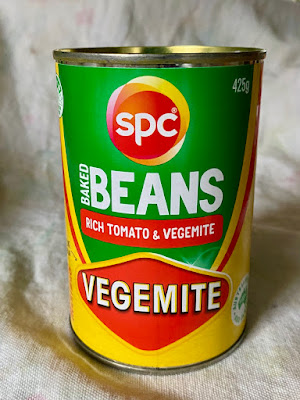 I am yet to try this tin of vegemite baked beans.  I always buy Heinz baked beans but with this gimmick SPC has lured me away.  Let's see how it taste! 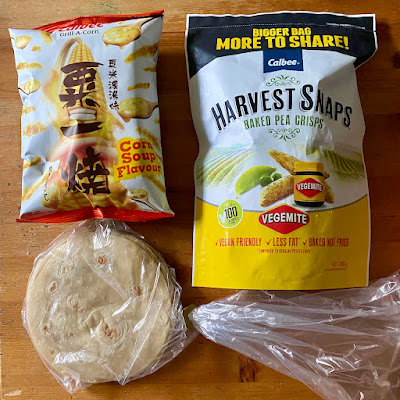 Here is an attempt to eat more savoury snacks.  The wraps are made locally for Coles Supermarkets and I have been loving them lately.  Mostly with peanut butter but occasionally with dip, fritters and salad.  I had to try the Harvest Snaps Baked Pea Crisps with Vegemite flavouring.  Delicious.  I expected the  packet of "Calibee Grill a Corn Soup Flavour" to be chip but it was actually the crunchy bumpy corn snacks like Twisties, but with corn soup flavour.  I was quite excited to find these snacks because it is rare that I see a corn soup on a menu without chicken in it. 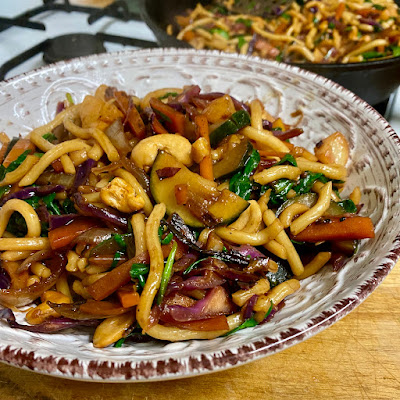 I made some very satisfying noodles with vegies and cashews recently.  It is not often I do stirfries but this made me wish for more. 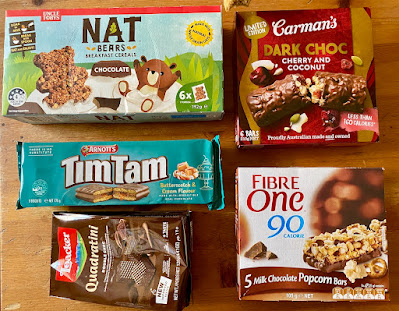 Now for some sweet snacks.  NAT Bears are deliciious bears shapes made out of breakfast cereal with some chocolate flabouring.  I really loved putting a Carmen's Dark Choc Cherry and Coconut muesli bar in my bag for a snack at work.  Lots of chocolate and flvaour but also lots of oats to fill me up.  The milk chocolate popcorn bars were a favourite with Sylvia.  And my favourite biscuits recently were the butterscotch Tim Tams and the Quadratini double choc wafers. 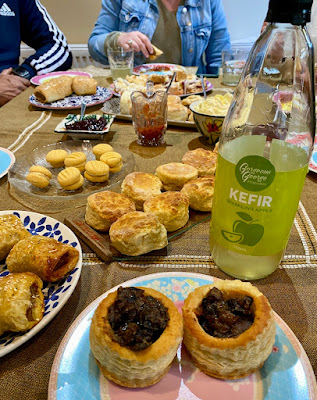 My mum held a Father's Day afternoon tea about a week ago.  She baked scones (both regular and gluten-free), coconut jam slice, a sponge cake and pavlova.  My sister brought along sausage rolls (both regular and gluten free).  And my mum served me some vol au vents with mushroom filling.  I went to the South Geelong Farmers Market earlier and brought along some Apple Kefir and yo-yos. 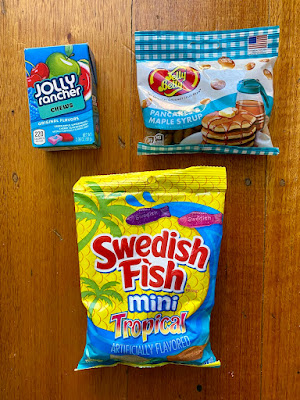 I went back to Satellite Hearts where I had fist visited recently.  Last time I purchased some crystals but this time I bought some American products.  Jolly Ranchers, Pancakes with Maple Syrup Jelly Belly and Swedish Fish.  Of all of these I preferred the jelly beans.  Sylvia and I agreed that the intense smell of maple syrup upon opening the packet made us feel like we were at the Pancake Parlour. 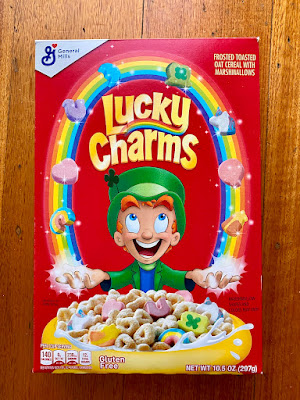 I also bought some Lucky Charms Cereal.  It is something I see in recipes every St Patrick's Day.  But I had never really understood what it is.  The oat cereal rings made a good breakfast with milk but Sylvia found the charms too sweet.  The charms are different shapes (rainbows, clovers, unicorns, horseshoes etc) and taste a bit like freeze-dried marshmallow - sweet and crunchy. 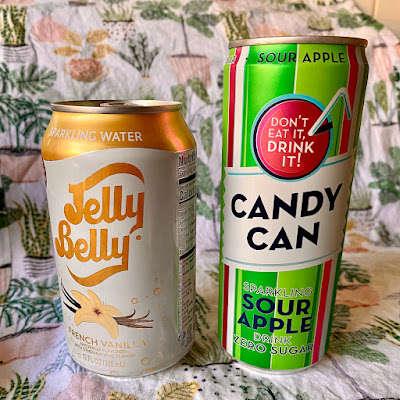 I also purchased two American drinks at Satellite Hearts.  We were curious but a few sips were enough of each can.  Sylvia found the French Vanilla Jelly Belly drink like soda water with some vanilla flavouring but not enough flavour.  The Candy Can Sour Apple drink tasted more of chemicals than fruit. 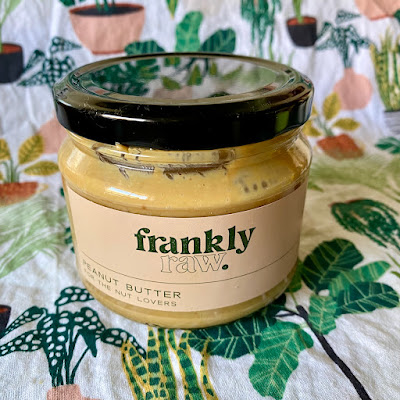 At the Farmers Market, I was treated to a opened tester jar of my sister's amazing frankly raw peanut butter.  I love my peanut butter unseasoned but her version with a pinch of salt and great creamy texture is delicious. 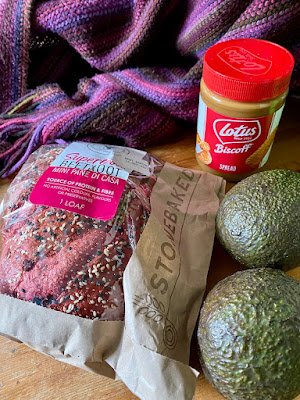 This weekend has been busy with a work retreat at Philip Island.  (With lots of conversations about the momentous historic moment of Queen Eilzabeth's death and the new King Charles III.)  I will write more about my trip later but this is a photo of a few of our purchases from the supermarket; when I got home I found that we were out of milk and bread.  We bought beetroot pane de casa, biscoff spread and avocados.  It will be an early night for me!

I am sending this post to Sherry of Sherry's Pickings for the In My Kitchen event.  If you would like to join in, send your post to Sherry by 13th of the month.  Or just head over to her blog to visit more kitchens and her wonderful hand drawn header.