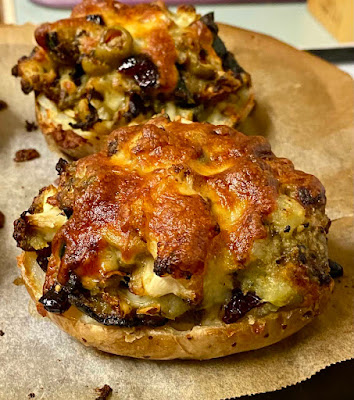 Baked potatoes are such a satisfying meal as the nights draw in and the evenings are suddenly chilly.  I made these recently when I had a whole cauliflower that I wanted to cook up in a stew but I had decided to bake some potatoes.  I started to fry up some cauliflower and zucchini to top the potatoes.  Before I knew it I had a hearty mixture to load into the baked potatoes and bake in the oven for a second time. 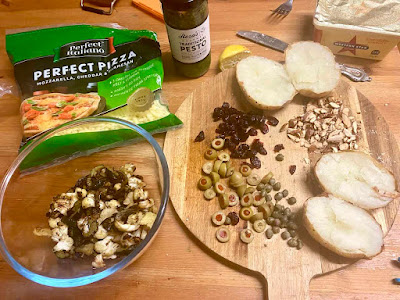 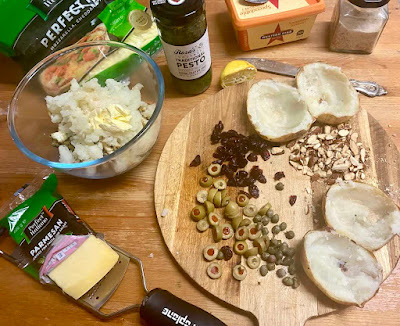 The potatoes were in the oven about one and a half hours.  I like to leave them til their skin is crispy and when I squeeze them (using oven gloves or a scrunched tea towel) they feel soft inside.  I really love those really crunchy skinned baked potatoes that I buy at festivals.  They seem to sit in the warmer forever so I don't worry about the potatoes being in the oven too long.  Though they smell good once done, which is every bit as good as a timer! 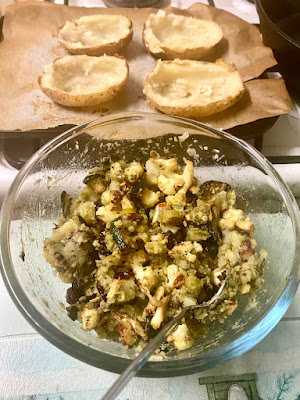 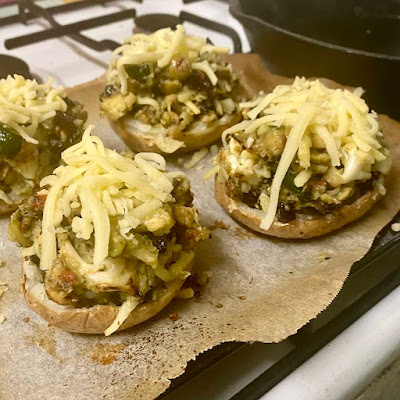 Now stuff the mixture into those potato shells.  Mine piled pretty high and then I squished it all down with the back of a spoon.  The flatter the mixture is, the more cheese will sit on top. 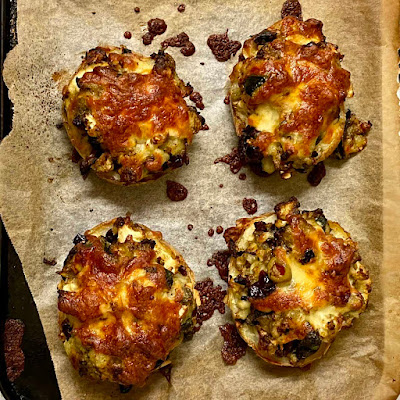 Bake them again in the oven.  They just need to warm through and crisp on top.  They can be made in advance, eaten at room temperature.  They can even be eaten with your hands.  These baked potatoes can be modified to suit what is in the kitchen but I really liked this combo.  It tasted almost meaty, though I have been told in no uncertain terms that a what a vegetarian finds "meaty" is quite different from a carnivore!  But even a vegetarian's idea of meaty is pretty good for a cool autumn evening!

Baked potatoes at 220 C for about 1.5 hours or til skin is crisp and it feels soft when squeezed or pierced by a skewer.

While potatoes bake, drizzle some oil into a frypan (I used a cast iron pan) and fry the cauliflower, celery and zucchni with a pinch of garlic salt until cooked but with a bit of resistance when skewered with a knife (they will cook more the second time).  Prepare remaining ingredients.

Place fried vegies, parmesan, cashews, olive, cranberries, capers, pesto, butter and lemon juice in a medium mixing bowl.  When potatoes are baked, leave oven on, slice in half and scoop out the cooked potato, leaving about half a cm shell.  Add cooked potato to the bowl and mix everything together.

Place four potato shells on a lined baking tray.  Spoon filling between the shells, pressing it in.  Sprinkle each shell with mozzarella.  Bake an additional 15-30 minutes until cheese is golden brown and crispy.  Eat warm or at room temperature.  Can be reheated to eat later.

On the stereo:
The Köln Concert: Keith Jarrett