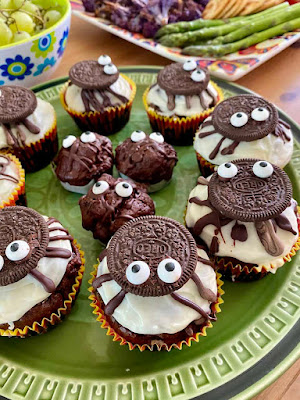 Each year we remember our twin sons, Alex and Ian, with a lunch and cake.  Lockdown has made it quite challenging to keep up these traditions.  Last year my parents were unable to come to the Melbourne in early November but this year they visited me for the birthday lunch just days after restrictions were lifted between metropolitan and regional Victoria.  It was many months since I had seen them so it was a special day in many ways. 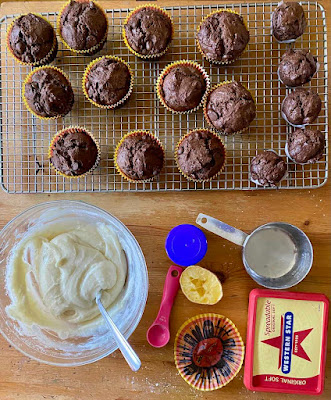 The previous day, I had made Oreo spider cupcakes with Sylvia.  We wanted something simple, given our energies had been drained by lockdown.  Chocolate is always my choice of flabour so we returned to a chocolate muffin recipe we had made last year.  Last time we made them a bit more wholemeal but this time we followed the receipt more closely.  They were really lovely and lasted well. 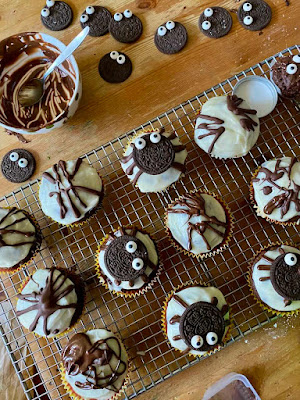 We made the cupcakes together and then Sylvia did a lot of the decoration.  Pulling apart oreos was very satisfying and piping chocolate legs was forgiving because the oreos could cover up a multitude of mistakes. 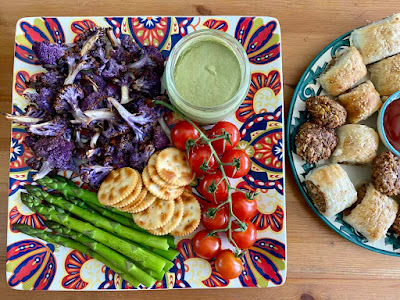 The lunch was pretty simple.  I baked sausage rolls and served them with some baked brie my mum made and a dip platter.  The platter was mostly from the farmers market: jalapeno, coriander and parsley hummus; roasted purple cauliflower; lightly steamed asparagus, cherry tomatoes on the vine and sadly I didn't think to look for crackers at the market so I had to get mine from a box of Savoys from the supermarket.   The cupcakes were our dessert and my mum also brought some chocolate caramel tarts. 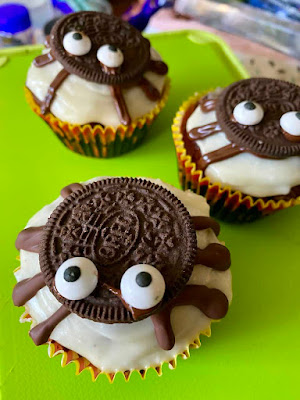 The oreo spiders were pretty cute.  The blog where I found the instructions said the oreos soften after a while so it suggested decorating just a few hours before serving.  They were nice with crunchy oreos but also good when the biscuits softened.  Personally if making for a nice lunch, I would prefer more time to prepare than a crunchy oreo.  We also made some mini muffins and just put candy eyes on them because it would not have worked with trying to stick the eyes on mini oreos.  The oreo spider cupcakes were a fun and easy addition to my Halloween recipes.

How to make Oreo spider cupcakes

To make the cupcakes vegan:

On the stereo:
Wonderland: original soundtrack by Michael Nyman