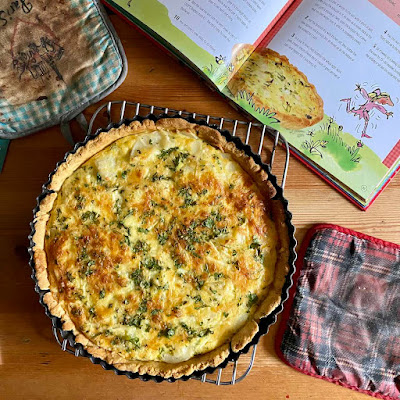 Dinner can be an adventure.  This is how I feel every time I make quiche.  I am not a big fan of eggs, and pastry has never been in my comfort zone.  Quiches are challenging, demanding and ultimately satisfying.  Sylvia asked for this cheese and potato quiche.  She found the recipe in one of her cookbooks.  She helped me make it and it was a fine dinner for both of us. 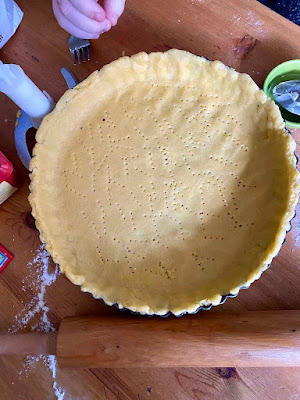 Many years ago I had a friend tell me that making pastry in the food processor is so easy.  She was so right.  It is a joy to watch it form into a ball in the food processor as it comes together.  It is even more of a joy to find a fluted, loose bottomed tart tin that I bought some years ago in hope of making some tarts.  Finally I had something to bake in the tart rather than just store marbles in it. 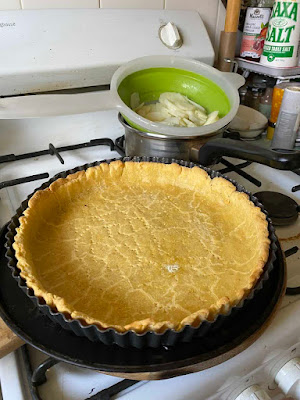 I found baking the quiche pastry a bit fussy.  I don't have baking beans so I used rice in the first part of baking.  Then I didn't read the recipe properly and didn't get my egg whites properly frothed and then I brushed the shell with egg white only to find that I should have baked it for 5 minutes before the second 5 minutes baking.  I think baking it for 10 minutes after I brushed on the egg white was ok (though I find egg white icky!) 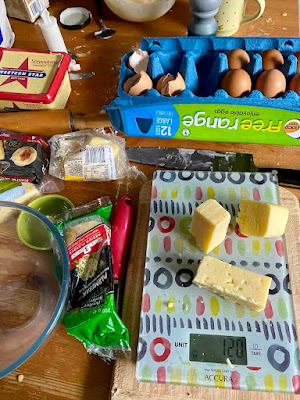 As you can see by the above and below photos, making the quiche was a messy procedure.  I gathered the ends of cheeses and found some parsley in the garden.  Chopping, slicing, grating, whisking, arranging, drizzling.  Broken egg shells, mixing bowls, saucepans, chopping boards, mixing boxes.  It was good to have Sylvia's help to get it done. 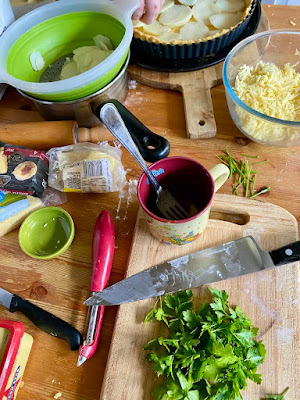 Sylvia likes her quiches plain.  The original recipe had caramlised onions which sounded lovely to me but not to her.  I would have added some corn or some olives or sun dried tomatoes.  It was a bit like the classic Spanish potato tortilla in a pastry shell! 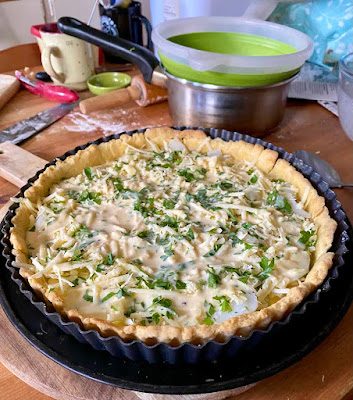 The parsley looked good on top of the quiche.  It came out of the oven a lovely golden brown and tasted fantastic.  I served mine with baby spinach, grated carrot, purple cabbage and balsamic vinegar on the side.  Leftovers also tasted great cold from the fridge over the next few days. 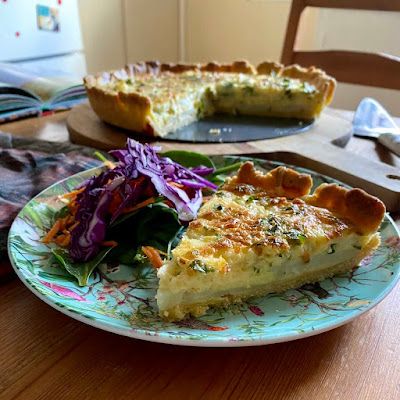 The quiche in the cookbook was one of the Five Famous Quiches.  Named after Enid Blyton's Famous Five mystery books.  So I have to tell you, that although it was an adventure making the quiche, it was nowhere near as much mayhem, intrigue and mystery as the lives of Julian, Dick and Anne, George and Timmy the dog.

If you watched lots of the TV show as a kid like me - as well as reading the books - you will now feel like singing their names and then basking in nostalgia of a love of the Famous Five as a kid.  Though I suspect not every kid's idea of playing Famous Five with a friend was arguments between George and Uncle Quentin in a haystack!  Those were fun times and I am sure the Famous Five would have even found mysteries in lockdown.  If you weren't a Famous Five fan, then I hope you just enjoy the quiche!

To make the pastry:

Whizz the flour, polenta, parmesan (if using) and seasoning in food processor to combine.  Add butter in a few lots until incorporated.  Then add one egg and process until it forms a ball of pastry.  If it is too dry, add a little water but mine was on the sticky side.

Knead the pastry very briefly on a flour dusted surface and this roll out until about 0.5cm thick.  Roll pastry around rolling pin and transfer to the tart tin, pushing to fit the edges.  Line pastry with a sheet of baking paper.  Fill with weights such as baking beans or (as I did) with rice.  Bake for 10-12 minutes.

While the pastry is baking, whisk egg white until frothy.  When pastry is baked, remove baking papers and weights.  Brush with whisked egg white and return tin to the oven for another 10 minutes.  Set aside while you put together the filling.

To make and assemble the filling:

Clean and peel potatoes.  Cut into  0.5cm slices.  Boil in salted water for about 10-12 minutes until just cooked.  Whisk together cream, 3 eggs and the egg yolk until creamy.

Layer half potatoes, sprinkle with half grated cheese and half herbs, then drizzle half the creamy egg mixture over.  Repeat with other half of filling.

Bake for 25-30 minutes or until golden brown on top.  Cool for 5 minutes before slicing.  Eat hot, warm or room temperature.