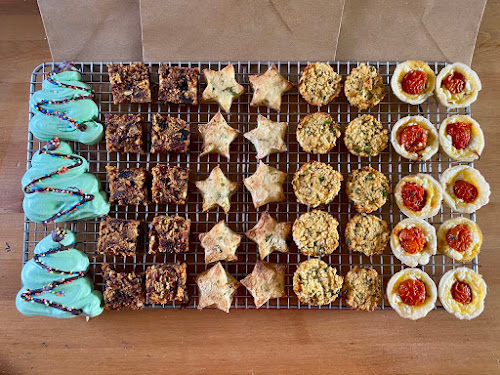 Christmas in July this year was indeed a moveable feast.  Back in the good times of June when 20 people could gather in a home it seemed we could do it but by July restrictions had tightened to only 5 guests and I considered a kids lunch and a parents lunch separately.  And then there were no visitors and I despaired.  Until a colleague suggested taking food to my friends who usually come around for Christmas in July.  So the food got portable and we were able to get together on zoom.  Covid19 is really making us having to innovate to connect in this unsettling and isolating lockdown time.
Once we had agreed on a date to share food and zoom, the planning had begun.  The food had to be vegetarian, include gluten free, be portable, not too bulky, not likely to spill, easy to reheat and easy to divide up.  Sylvia and I discussed lots of ideas.  We bought a few choice items at the farmers market the weekend before and then on the weekend of the lunch, we had a cooking blitz.  Here is the menu.
Menu

Meringue christmas trees
We planned to have lots of Christmas tree shaped meringues for everyone.  Sylvia has made a few batches this year that have worked really well.  So I left her to make meringues but the first batch did not form stiff peaks and it took another batch and a lot of beating (5-10 minutes) to get the desired marshmallowy thickness.  Unfortunately once bitten twice shy meant that the second batch was smaller and then some spilled.  We only had 5 meringue Christmas trees in the end.  One for each kid.  These were made on Saturday and on Sunday Sylvia finished them off by piping chocolate and sprinkling hundreds and thousands on top to look like tinsel. 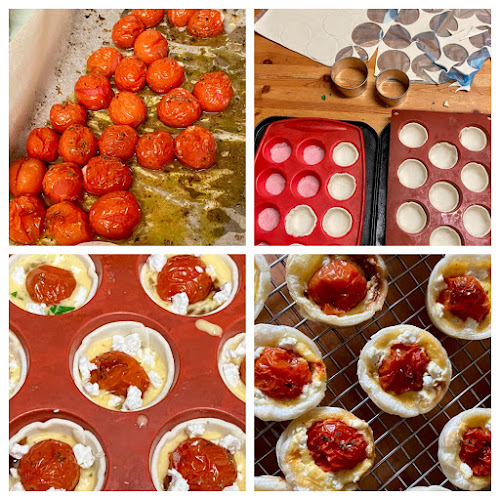 Mini tomato, goats cheese and caramelised onion quiches (recipe at end of post)
One reason I love baking for Christmas in July is the opportunity to try recipes I have been drooling over for far too long.  I had pinned a picture of these tarts some time ago.  They looked cute and delicious and great to packing for a picnic or a potluck.  Planning ahead I bought some onion marmalade and goats cheese at the farmers market a week ahead.  I made them on the Saturday night.  They weren't too hard but were a bit fiddly. 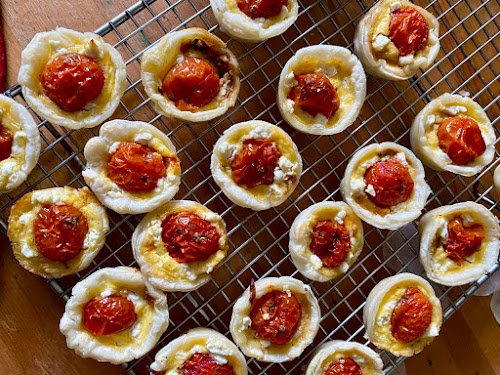 Sylvia, who has embraced eggs over the last year or so, does not understand how I will not eat eggs by themselves but I will eat quiches.  i have tried to explain I like quite a bit else in the quiche other than eggs.  Meanwhile I find it odd I made her a quiche with no onion marmalade and she still left bits of her tomato.  I am not sure if it is a great thing that we agree on cheese and pastry but we do.  Unfortunately the pastry was not as golden as I would have liked.  I didn't want to overcook as it needed to be reheated.  But the silicone (which I used) is quite shy of browning pastry compared to metal muffin tins.  They still looked quite cute with the 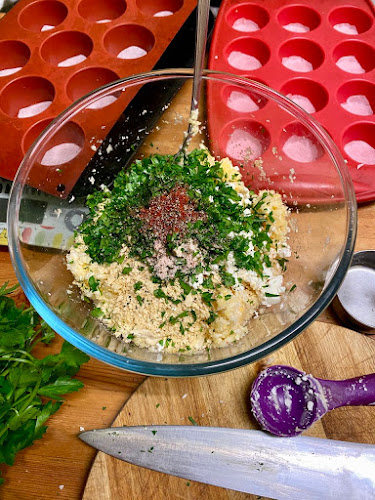 Baked cauliflower bites with hummus and feta
Once the quiches were made I set about making the cauliflower bites which I chose because they were gluten free.  I think they appealed because cauliflower and cheese scream Christmas to me, probably because I love cauliflower cheese as part of any roast dinner.  It lifts any dinner to from everyday to entertainment!  I was also interested in the idea of mixing in hummus and happy to find something gluten free I could serve. 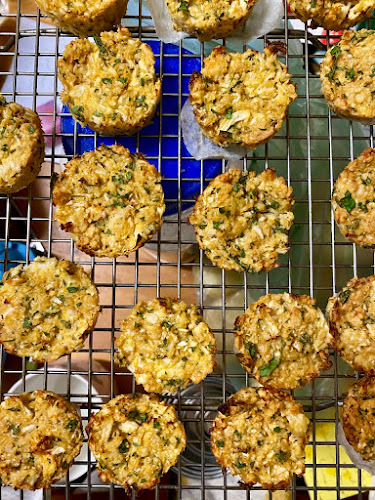 The cauliflower bites seemed a bit fragile, especially when they were hot out of the oven.  It helped to Squeeze out as much liquid as possible and press them down firmly in the muffin tin.  This was the last of my Saturday work and I was up late because I am a night owl and I knew I would not be able to do much in the morning. 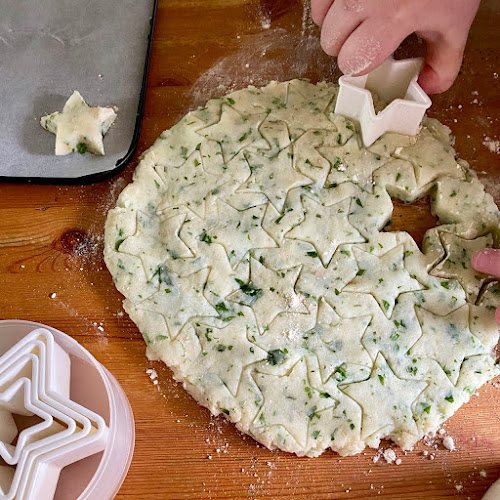 Potato Parsley Stars
It was a given that we had potatoes.  But we had to choose from roast potatoes, potato salad or potato stars.  Sylvia wanted stars.  So stars it was.  We've made them a few times.  They are fun and fairly straight forward.  I am very sad that my favourite Trentham potato lady at the farmers market has not been visiting since lockdown.  I assume she is unable to to travel into Melbourne.  She sells potatoes that are so full of flavour that it feels a little sad to buy potatoes at the supermarket but that is what I had to do. 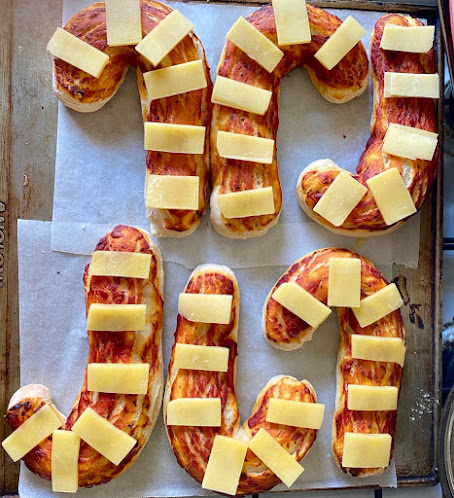 Candy cane pizzas
While I love to experiment with the food I serve the adults, I always make the same thing for the kids.  It seems that kids always love pizzas even if they are a bit picky with any other food I made.  I am always trying to get the cheese not to melt too much so it looks like stripes.  It is constantly a challenge.  But I have experimented with this and hope to share a recipe soon. 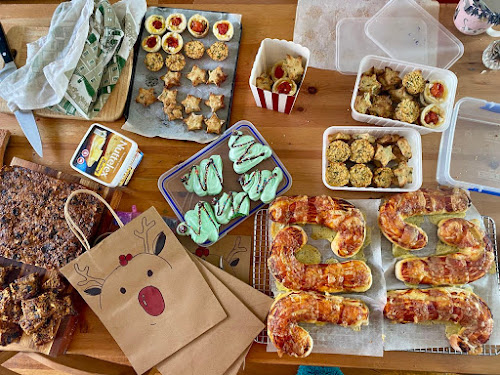 The last item I made was a Gluten Free Christmas Cake that I baked a week before the lunch.  More about the cake in another post.  Sylvia decided to make Christmas bags for the kids.  We wrapped the pizzas in foil, and put the meringues into popcorn boxes.  I found some old takeaway boxes and used more popcorn boxes to package up the food.  Then I packed everything for one family and had two bike rides with food in my panniers that I dropped off during the ride.  I was pretty behind but by about 3 we all joined in a Zoom video chat to talk about the meal, sewing masks, wearing masks, contact tracing, remote schooling and our families. 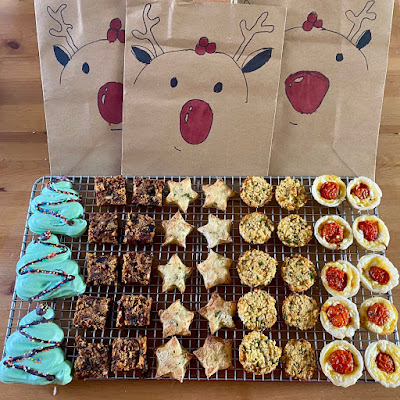 Making lots of finger food seemed more work and less food than a meal we could share in my house.  Luckily one friend left some tubs of salad on the verandah that completed the meal nicely.  I am glad that we did the meal when we did.  The last week has seen among us illness, corona virus tests (negative), contact with people with corona virus, and the government talking tighter lockdown which today has culminated in moving from stage 3 to stage 4 restrictions.  I really hope that in December we will be able to be more social when it comes to celebrating Christmas!

2 eggs
1 tbsp cream
1 tbsp finely grated parmesan
1/8 to 1/4 cup caramelised onion chutney (I used onion marmalade)
50g goats cheese, crumbled
Cut cherry tomatoes in half.  Please in a baking-paper-lined roasting dish, drizzle with oil and scatter with herbs and seasoning to taste.  Roast at 190 C for 10-15 minutes or until skins start to wrinkle and burst.
Meanwhile grease and line two x 12 hole or 1 x 24 hole mini muffin tins.  Cut 7cm diameter circles from the pastry sheets and line muffin holes.  I had to use my fingers neaten up the tops of a few pastry cups once in the tin because they were not smooth.
Spoon a generous quarter teaspoon of onion marmalade into the bottom of each pastry cup.  Light whisk together eggs, cream, parmesan and seasoning.  Divide among pastry cups, filling them about 3/4 full.  Place a cherry tomato in each and crumble goats cheese around tomato.
Bake for 15-30 minutes until tomatoes are well cooked and pastry is golden.

NOTES:
Baked cauliflower bites with hummus and feta
From Cooking Canuck
Makes about 24
500g cauliflower cored and riced
5 tablespoons hummus
1 egg
1 egg yolk
1/3 cup panko breadcrumbs (I used GF)
3 tablespoons crumbled feta cheese
3 tablespoons finely chopped parsley
1/2 teaspoon smoked paprika
1/4 tsp salt
1/4 tsp ground pepper
Once the cauliflower is riced, place in a clean teatowel and wring out as much liquid as possible.  Mix all ingredients together with the cauliflower in a medium mixing bowl.  Spoon into lined and greased mini muffin tins (2 x 12 hole or 1 x 24 hole) and press down in the tin.  Bake for 20 minutes or until golden brown.  Gently remove from tin.  Can be eaten warm, room temperature or frozen for later.
On the Stereo:
An Aussie Christmas
Posted by Johanna GGG at 22:40