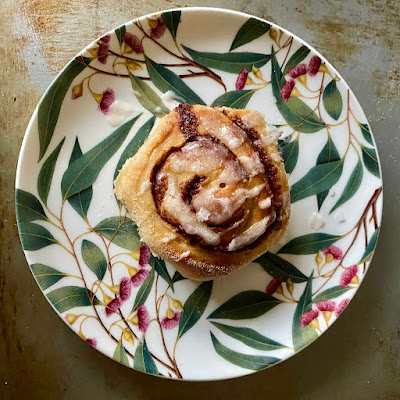 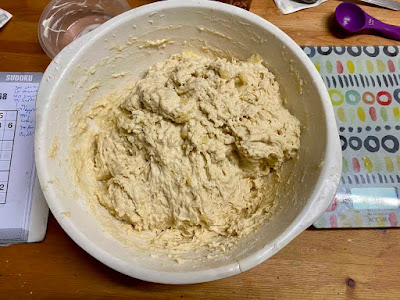 I baked these scrolls on the first day of lockdown 4.0.  Remote learning for school kids started the following Monday.  Schools closed on the Friday.  And Sylvia had already had the Thursday at home as a sick day.  My manager had suggested we work from home on the Thursday, given that lockdown was looming and the exposure sites were rapidly multiplying.  I put the dough together on Thursday night. 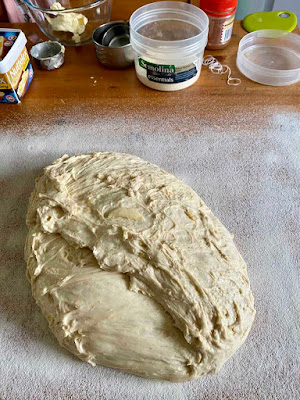 In the same week our cat was really sick and we were waiting for him to come home from a couple of nights on the drip on the Friday that lockdown started.  It was a pretty stressful time so I took carer's leave on the Friday.  I had been promising to make cinnamon scrolls for Sylvia for a while and decided this would be a nice thing for us to do as lockdown began.  We visited our cat at the vet's in the morning and then spent the next few hours shaping and baking scrolls before we could bring him home. 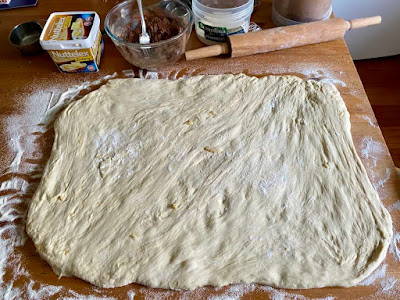 I have tried a couple of sweet scrolls before with my usual sourdough dough.  They were just a bit chewy rather than fluffy.  So this time I made more amendments to the dough to make it softer.  I added some sugar, butter, egg and oil.  I also found some stewed apple in the freezer and added this instead of some of the water.  Apple and cinnamon is a classic combination, even if the apple in the scroll was pretty subtle. 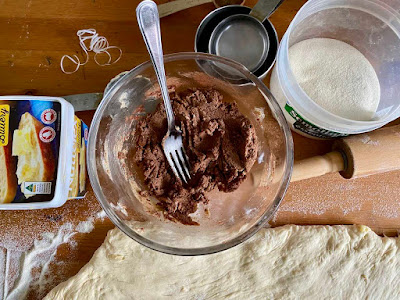 Sylvia enjoyed mixing up the cinnamon butter spread.  It was one of those mixtures that seem impossible at first but the come together into a nice paste.  Spreading the paste was pretty tough.  I wonder if just a dash of hot water might have made it easier to spread. 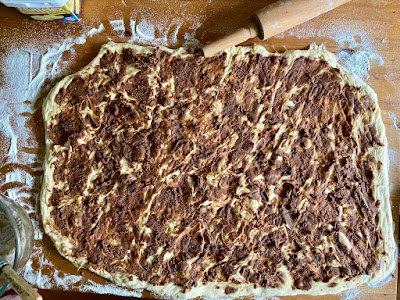 Then we had the challenge of rolling it up and chopping it into individual scrolls.  Sounds easy bit it aint!  (It would have been easier to remember pat the dough out on baking paper which helps to roll it up - so I have added that back in to the recipe.)  Rolling up a large rectangle of dough is when you realise just how even you have patted/rolled out your dough.  Ideally it should be all the same size.  In reality it looks more like a snake that ate a mouse and has unseemly bulges and tapers off into quite a small end.  Ugh! That is a rather unsettling analagy but I guess not many people read my notes these day! 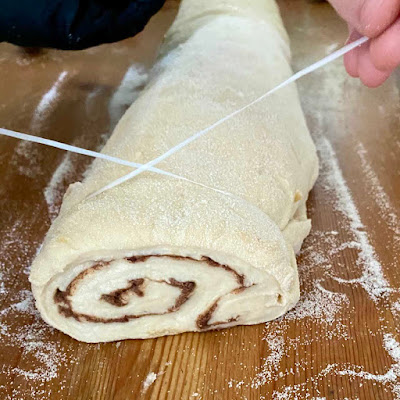 A piece of dental floss with the mint flavour washed off and dried is an good tool for cutting the scrolls.  However I find I still need to shape them slightly on the tray.  Which is not so easy when they are so soft they are still a bit sticky.  And again, trying to cut them to be evenly sized is a bit of a challenge.  You might also spot the scroll that I tried move in the photo below.  Take it as a warning not to try this at home! 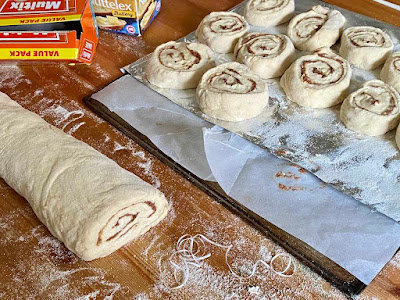 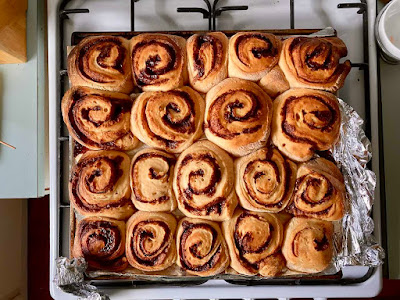 Then we made up some icing to drizzle over the scrolls once just slightly cooled.  They were still warm enough that the icing was quite melty.  Then we had time to eat one before picking up our cat from the vet.  Comfort food was very much in demand! 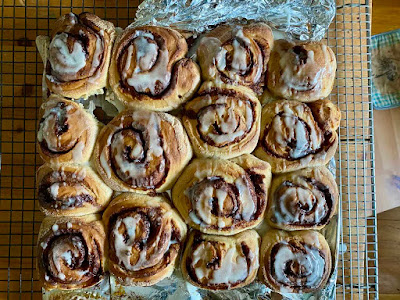 And we might have eaten another when we brought our cat home from the vet.  We were so pleased to have him home but wished he would have had the ability to feast on good food the way we did.  That was a few days away from him getting home but we were glad to have him back snuggling up with us.  (Last week we got the good news that his now fully recovered.) 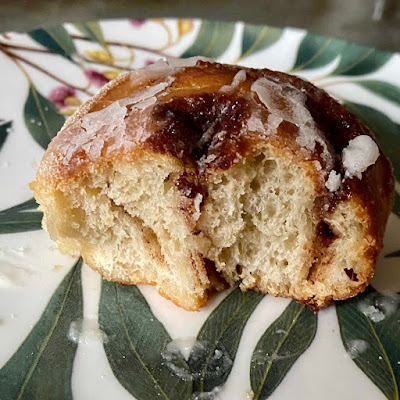 I felt like I had done a pretty good job of these cinnamon rolls.  I wanted to make the dough as easy as my usual overnight sourdough dough.  That means being able to bung everything into a bowl the night before and leave it to rise.  They weren't overly sweet but with the glaze, they were sweet enough.  I like to have a stash of sourdough rolls in the freezer and thought a stash of cinnamon scrolls would be a nice addition.  However even the frozen cinnamon scrolls did not last that long.  I guess we just needed the comfort food!

Postscript: We are now out of lockdown in Melbourne.  Over the last few weeks the restrictions have been gradually easing.  But as our freedoms return we are seeing lockdowns happen across the country in NSW, then Darwin, then Western Australia and today Queensland.  The country seems in the grip of Covid in a way it has not been since early last year.  Best wishes to all those in lockdown or coming home from lockdown to quarantine.  It is a tough time!

A few hours before making the dough, take sourdough starter out of the fridge and feed it so it gets nice and bubbly.

About an hour before going to bed (or first thing in the morning) make dough.  First mix sourdough starter and butter.  Mix in apples, treacle, sugar, egg and salt.  The mix in water and then flour.  It will be quite a sticky dough.  Set aside covered with a tea towel for half an hour.  Knead in the bowl for about 1 minute (sprinkle with a little flour if necessary).  Cover tightly with a wrap or greased clingwrap.  Leave at room temperature for 8 to 12 hours until about doubled in size.

Scrape dough out onto a well floured surface.  Pat the dough onto a long sheet of baking paper into a rectangle of about 45 x 30 cm.  It should be no more than 1cm thickness.  Mix brown sugar, butter and cinnamon.  It will take a bit of mixing to become a paste.  (A little hot water might help to loosen the mixture and make it easier to spread.)  Spread over dough. At the long edge, carefully roll up like a swiss roll using baking paper to support the dough until you have a long roll.

Use a non flavoured dental floss (I washed and dried mine) or fishing line to bring under the edge of the roll, wrap around the dough, cross over and swiftly pull the ends to slice pieces of about 1.5-2cm.  Place each piece on a lined tray about 1cm apart.  Cover with a piece of greased foil,  Preheat the oven to 240 C and leave for about 30 minutes or more.  They will not rise very much but that's ok.

When it time to bake, keep the scrolls covered with foil.  Bake for 10 minutes.  Remove foil, reduce heat to 220 C, and bake for a further 20 minutes but keep an eye on them after 10 minutes to check they are not browning too much.  Once they sound hollow when tapped remove from tray and cool slightly on a wire rack.

Mix icing sugar and margarine.  Add a drizzle of hot water and stir.  Repeat adding a little hot water until the icing is thick enough to hold its shape but thin enough to drizzle.  Drizzle over buns.  They are best on the day of baking, though can be kept for the next day.  If they are not going to be all eaten, freeze on the day of baking.

NOTES: They are not overly sweet and need the icing to make them sweet enough.  Increase the filling if desired.  I also used stewed apples because I had them.  You can use apple sauce or yogurt or just more water or liquid such as milk.  These scrolls can be vegan if you use vegan margarine instead of butter and an egg substitute such as a chia egg, some soy flour, apple sauce or just some extra liquid.

On the Stereo:
Cut: The Slits