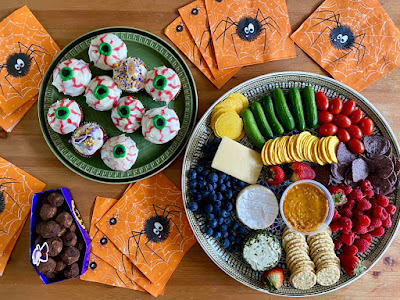 Every now and then this year, the craziness seems to settle but the calm never lasts long.  Last week Victoria was into its third week of double doughnuts (no cases and no deaths each day) and everyone got used to Biden moving on as Trump refuses to concede the presidency  Then my brother wass finally confident enough to book to come from South Australia to Victoria for Christmas.  Days later, the state of South Australia had its first outbreak of community cases since April.  SA went into lockdown, borders closed but this all eased when it was found that someone had lied to contact tracers!  And we all sighed and wondered if this virus would ever go away.

Meanwhile closer to home over the past few weeks, I have had a mouth ulcer, a tooth extracted in two parts (3/4 one day by the dentist and then the final 1/4 the next day by a specialist), plus my doctor has told me I have low iron and vitamin D.  The only good news was that my good cholesterol had gone up since the last test.  No doubt that is due to my peanut butter comfort food eating during lockdown.  And the cat has had fleas.  Thank goodness it was 34 degrees when I did three loads of washing and changed all the bed linen.  Given that it is warming up, I am very glad that this morning the Victorian Premier has announced that we will no longer have to wear masks outside from midnight today!  There are also more freedom next week about how many people can gather indoors and outdoors. 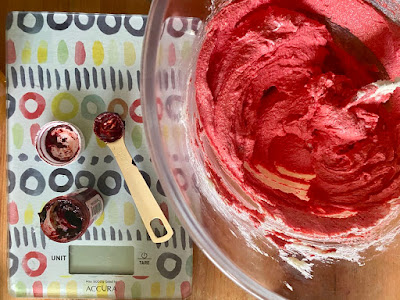 All of this is not at all relevant to these red velvet cupcakes that Sylvia and I made for the lunch we had to remember the birth and death of our stillborn sons.  Halloween is more relevant but that seems so long ago, given how much has been happening lately.  Sylvia is now into Christmas and has festive decorations all over her bedroom, though I am holding out in the rest of the house. 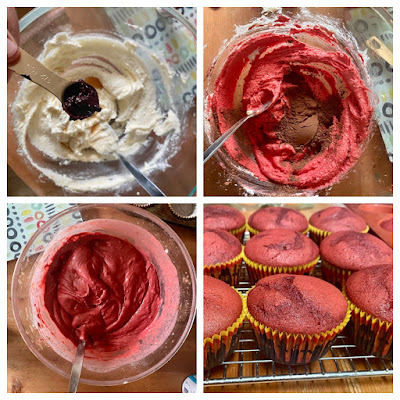 The recipe was a really good one but it did call for a lot of red food dye.  One tablespoon of red food dye is a big hit of red.  I discussed it with Sylvia who had made a red velvet cake in a mug a few times and she told me to start with half a teaspoon of food due.  As you can see above, that gave a very bright rosy red colour.  I did keep wondering how it would have looked if I had followed the instructions to put in a tablespoon. 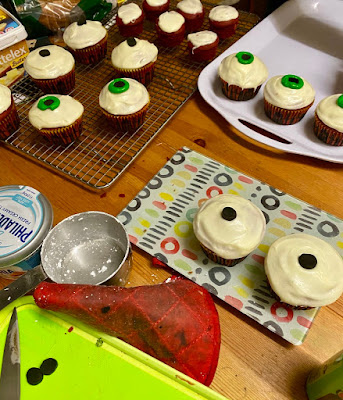 Otherwise, it was a great recipe with lovely domed cupcakes.  The order of mixing in ingredients was unusual but worth following as it resulted in a mixture like mousse and, when baked, a light fluffy crumb that still tasted good a few days later.  In fact it was so good I have considered tweaking it to make other flavoured cupcakes.  I made 12 muffin sized cupcakes and about 10 mini muffins. 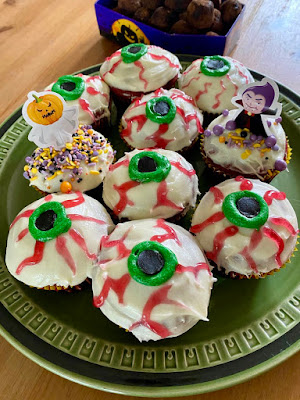 Decorating the cupakes was pretty easy.  We were inspired to try these cupcakes because Sylvia was sent red food gel from Scotland last Christmas.  When we used it, we decided it would be perfect for these cupcakes.  At first it was hard to pipe and then I cut more off the tip off the tube and it came out quite thick.  For some cupcakes I used a toothpick to stretch some of the jags in the jagged lines.  Sylvia also had a Halloween cupcake decorating kit so she did a few with sprinkles and cupcake toppers. 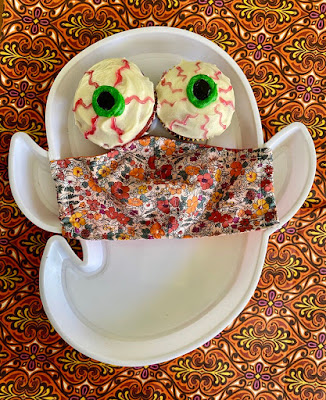 I took this photo of the ghost wearing a mask as well as cupcake eyeballs because lockdown had made it hard to plan the lunch.  My parents usually come to this lunch but were kept out by the "ring of steel" separating Melbourne and regional Victoria.  It was not until about a week before that we knew we could have any visitors.  We had a friend of mine and her daughter who is good friends with Sylvia.  As well as the cupcakes, we did a (mostly) savoury platter of crackers, chips, dip, vegies, berries and cheese.  It was so good to have friends in the house and just sit and chat and nibble and try the sugar free drinks that Kerin brought along.

Since then I have been a pub, cafes, bookstores, department stores and ridden escalators.  Sylvia has had playdates and sleepovers.  Last weekend we went to my parents' home in Geelong.  I was so excited to go to the beach at Torquay.  So was everyone else, based on the all the traffic.  It was impossible to get a park and finally we parked where another car was just leaving but as it was on the grass we got a parking ticket.  I would be more annoyed if I had seen any other free parking spots.  And I guess the council was catching up on all the fines it hadn't been able to collect in lockdown.  Every first out of lockdown still seems new and exciting, even parking tickets!

Mix milk and vinegar and set aside.

Cream butter and sugar in a large bowl until pale and creamy.  (I did this by hand.)  Mix in food dye to make a bright red mixture.  Add more food dye if required to make it glary.

Add cocoa and then mix in one egg.  Mix in a spoonful of the flour and another egg.  Now mix in the remaining flour with baking powder and bicarb.  The other ingredients will take the glare off the colour of the mixture but it should still be quite reddish.

Spoon mixture into prepared muffin papers.  Bake for 20 minutes or until round and domed and a skewer inserted in the middle comes out clean.  Cool on a wire rack.

On the stereo:
Back to Basics: Billy Bragg