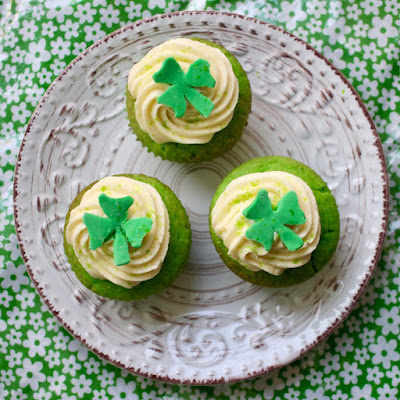 St Patrick's Day was lovely this year.  I made lots of green food, including two batches of green shamrock cupcakes.  I went to a St Patrick's Day fete where green ruled.  Today I am going to share how I made the cupcakes and the fondant shamrocks. 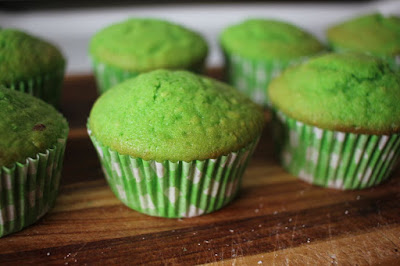 While I am a newcomer to fondant decoration, I am no stranger to green food on St Patrick's Day.  I used to love green beer on the day when I was a student and once made a wonderful cake with a friend of St Patrick sending the snakes of Ireland into the sea.  (You can see a picture of the cake here but bear in mind it was taken long before digital cameras or blogs graced our lives.)

I've done quite a few green cakes since.  This year I decided to do green cupcakes for a school bake sale.  It was easier to do because Sylvia was on a sleepover at a friend's house.  It gave me time to bake cakes and shape shamrocks on the Friday night and then make buttercream and pipe it before taking them to the bake sale at 9am.  And to make a peppermint crisp slice that I will share another time.  (And to watch the tv news in horror as the Christchurch mosque killings were reported.  So sad to see such hatred fuelling all that death and grief.  So heartening to see Jacinda Ahern's compassionate and brave response.) 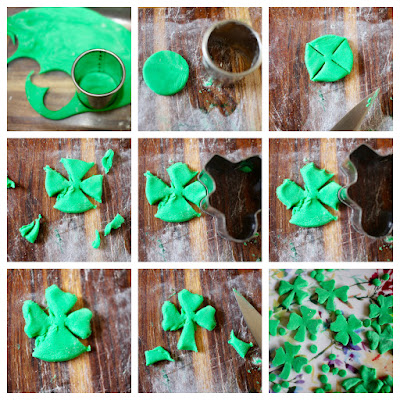 I am very new to decorating with fondant.  I don't like eating it and so I don't tend to use it.  However, we decided to use it for Sylvia's birthday cupcakes (in a post soon) and had heaps leftover.  I gave some away for friends doing a party cake (who reported back it was too sweet but looked good).  I liked the idea of just a little fondant to decorate the cupcakes.  When it came to making shamrocks, I was pretty unsure and made it up myself.  Once I got a system going it was easier to make them all. 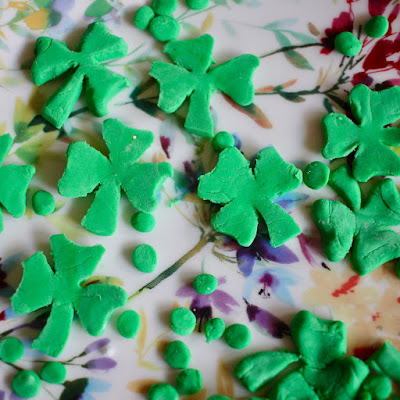 I made most of my shamrocks while watching tv.  (As an aside I highly recommend the coming of age movie, Submarine, written and directed by Richard Ayoade.)  Fiddly work like that is easier when there is something else to concentrate on, whether a podcast, tv show or chatting with a friend.  I kept the piece of fondant whole rather than trying to piece together little bits of fondant.  I also made some fondant dots to use as sprinkles but didn't have enough time to use them.  Maybe I will experiment with them at at later date. 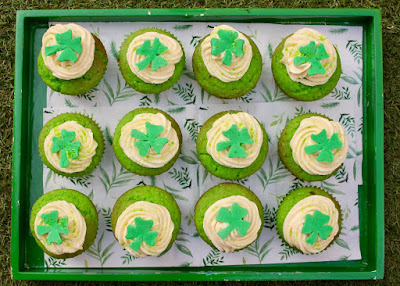 I took my dozen cupcakes to the bake sale and was glad to have bought the slice as well because there wasn't much there.  I think the last few bake sales have had so much baking that people probably thought someone else would bake.  I was pleased to see that they sold well.  Honestly I was happy to see others eating them because these are not my sort of cupcakes at all.  They are too plain and too much icing.  But I had fun making them.

In fact, I was so pleased with my shamrock cupcakes that I offered to take some to my niece's school fete the next day.  Making them with Sylvia was a bigger challenge.  Especially as before I began my brother rang to ask us to come down Saturday night rather than Sunday morning to have a family dinner. 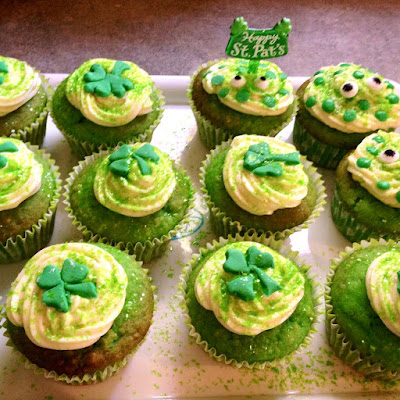 We made the cupcakes, buttercream and shamrocks at home on Saturday and put them together on Sunday morning.  There were slightly more sprinkles and only a tiny bit more time than on the previous day.  Sylvia got to use her St Pat's Day sign.  And they were appreciated at the school fete, even though there was lots of good food.

Cupcakes, buttercream and fondant shamrocks can all be made the day before.  Pipe the buttercream onto the cupcakes to make a small swirl that still leaves some of the green cupcake visible.  Place a shamrock on top.  Sprinkle with green sprinkles.  I tried making some small green dots with fondant to place in the buttercream but never had time to experiment with placing them neatly.

Cream butter and sugar.  Add eggs, vanilla and green food dye.  Beat until smooth.  Fold in half the milk and half the flour and then repeat with remaining milk and flour.  Spoon into pattypan cups or a greased pattypan (or muffin or cupcake) tray.  Bake at 180 C for 12 to 15 minutes or until golden brown and a skewer inserted in the middle comes out clean.

Using electric beaters, beat butter til creamy.  Gradually beat in icing sugar.  By the time I added all icing sugar, it was like tiny pebbles.  Beat in a tablespoon of milk at a time until the mixture is creamy.

Take a chunk of white fondant about 8 x 5 x 5cm.  I dabbed on a good thick green food dye (because I did not want to dilute the fondant too much) and kneaded it to make the fondant green.

Lightly dust a board with icing sugar.  Roll out the fondant to be 2-3mm thick, turning it over once or twice while you roll so it does not get too sticky.

Cut out a circle of fondant.  (My cutters are about 2-3cm in diameter.)  Put the remaining fondant in an airtight container to prevent it drying out while you shape each shamrock.  Have a little icing sugar at hand to rub on hands if fondant is at all sticky but only use a little to avoid having it all over fondant and leaving white spots.

Cut four lines equally spaced from near the middle.  Cut three of the quarters into thinner wedges by shaving off a little either side.  Shape each of the three wedges into a shamrock leaf shape.  I did some of these with making a small dint with my round cutter and the using my hands but found it easier to find a wavy cutter (a mini gingerbread man cutter worked as in the step by step photos) and use to cut some shape to found the corners as well as make a little dent in the middle before final shaping with my hands.  Then cut the fourth quarter to be a stem a little thinner at the top than the bottom.

These can be air dried overnight.  It will make them a bit sturdier for handling but still soft enough to eat.

On the Stereo:
Irish pub classics
Posted by Johanna GGG at 22:49