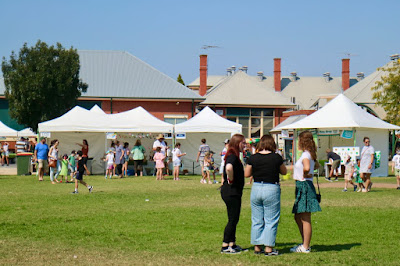 This St Patrick's Day I really went green.  Green food, green clothes and a fete where green abounded.  (And you only have to look at the name of my blog to know I love green!)  Today I will share some of the lesser green food I made (a peppermint crisp slice) and some photos of the fete. 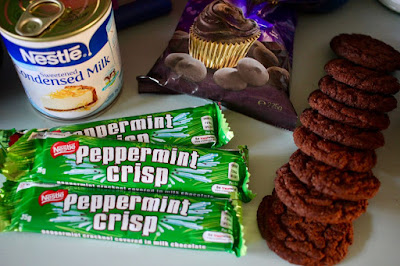 Let's start with the Peppermint Crisp Slice.  I was inspired by my sister in law's Aero mint slice.  However Peppermint crisp is a sentimental favourite.  My mum has been putting it on pavolvas since I was a kid and still does to this day.  Whereas Aero is a johnny-come-lately in my world of chocolate bars.  I think it became a joke to me when I travelled to Europe and found it sold as Bros bars.  And if you had a sister who loved the band called Bros then it would amuse you too to find a bar called Bros which is advertised "it's the bubble of nothing that make it really something"!  'Nuff said. 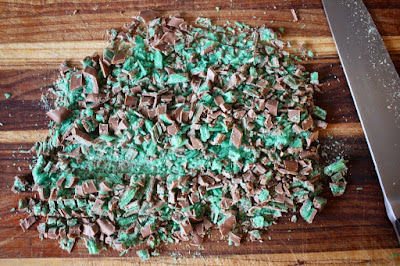 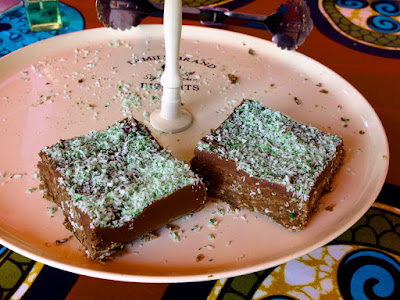 I made the Peppermint Crisp Slice to take a school cake sale on the eve of St Patrick's Day.  Hence the token greenness of the peppermint and my decision to make the coconut on top a little green.  I was in such a rush to get it to the cake stall on time that I forgot to photograph it a home or even save a piece.  So I suddenly remembered when there were only two pieces left at the cake stall.  After taking the photo I purchased a piece so I could taste it.  And it was so good that I regretted not leaving a stash at home.  But it was also so rich and decadent that perhaps it was better to have it out of the house. 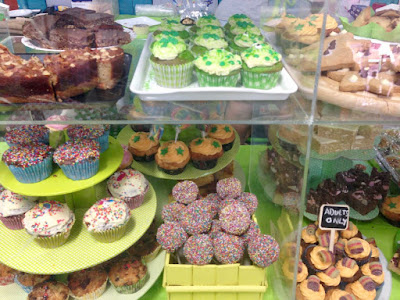 At the same cake stall I made some shamrock cupcakes and offered to take some to my niece's school fete.  You can see this in the picture of some of the cakes in the Kilarney Cafe at the fete.  I was amused that my niece went there twice: once for one of my cupcakes and once for her mum's choc chip cookies.  They had heaps of food but sometimes eating what you know is comfort. 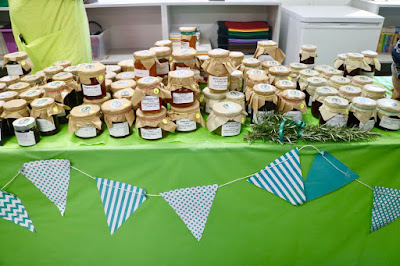 I got to the Irish Folk Festival early and had quick wander around the fete. It meant getting to the jams and cake when they were still in huge piles, having my pick of Granny's O'Reilly's jumble stall, walking through the creative market when it was quiet.  I bought a plum relish, some peppermint slice (yes I know it was a little ironic) and an unused cactus water dispenser.  I was very tempted by the Live Eco stall with lots of reuseable products such as bread bags and straws but was happy to see they have a store on nearby pako street. 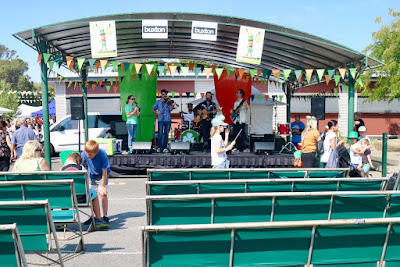 When my family arrived we watched some of the music.  My brother played with his band and got my niece up to sing "Baby Shark".  I admired her bravery in getting up on stage.  (The photo above is the band warming up when it was I could get a clear view.) 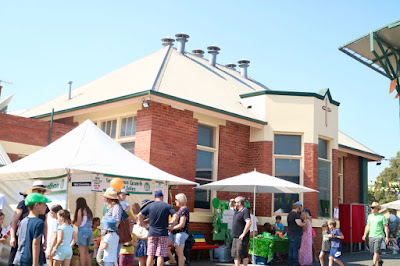 While we sat watching the band, we also watched the queue grow at the bbq stall.  It was only later I saw they had baked potatoes nearby. 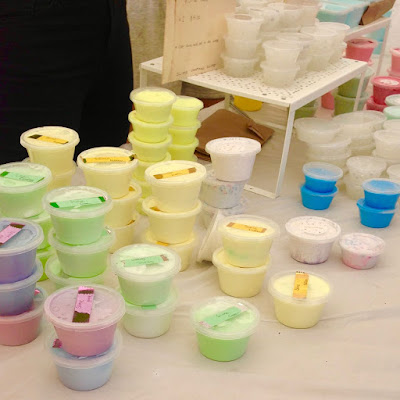 The kids were not hungry yet.  They were more interested in the Kingdom of Magical Slime.  There were a few purchases there and then some disappointed looks once it sold out. 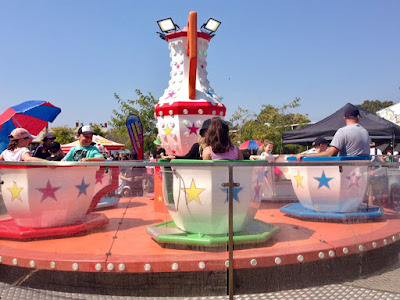 And then quite a few of my family left and we stayed on with my sister and niece.  Sylvia and her cousin had a great time on the jumping (dinosaur) castle, the tea cup ride and the flying swings.  Only my niece went into the petting zoo while Sylvia and I stayed outside to try and catch an escapee guinea pig (luckily the idea of us catching him was scary enough to send him back to captivity). They also had great fun doing crafts and cupcake decorating.  The craft room had a make-your-own-squihy.  Sylvia and her cousin had great fun.  Though it was a bit of a challenge when my niece asked me to hack a unicorn shape out of a chunk of foam.  She was pretty happy with my attempt. 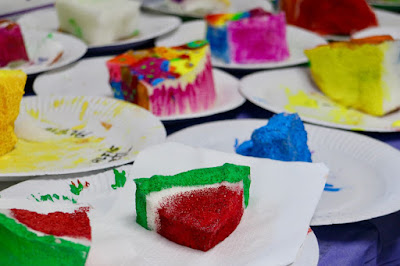 While they were painting their squishies, my sister ran out to get us potato twists for lunch.  Then it was time to cover some cupcakes with icing, sprinkles and lollies.  Then we tried to wait for the cupcakes and squishies to dry!  The joys of crafting at a fete.  Sylvia was very pleased with her watermelon slices. 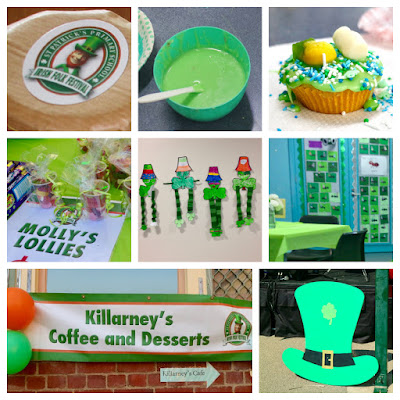 It was a warm day and the girls wanted something sweet.  They bypassed the ice cream and pancake stalls for the snow cones at Molly's Lollies.  We took them to some shaded seating and sat enjoying watching the crowds.  Best fun was watching the dunk-the-teacher game where kids threw a ball at a target and if they hit, their teacher got dunked in the water.  Thank goodness it was a warm day but I still admired the good nature of the teachers in participating. 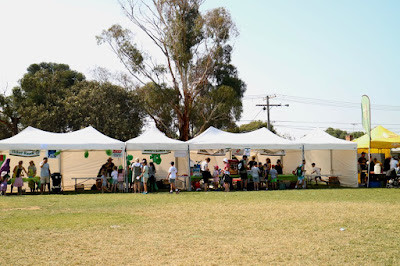 Finally it was time to leave.  We had a lovely time spending time with my niece.  She showed us where her classroom was and we went with her to the Art Show (below) where they had some really lovely artworks.  I particularly liked the printed tea towels. 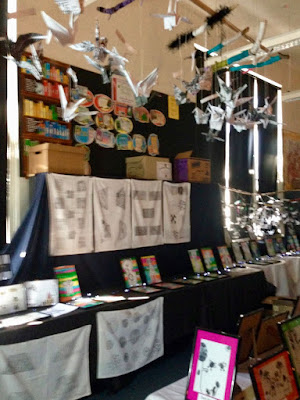 Finally I leave you with the recipe I used for the peppermint crisp slice.  I found it hard to find exactly what I wanted.  It has to be simple in the way of old fashioned CWA slices.  My slice was delicious but it was quite soft, even with adding some coconut.  But it tasted great and could be made with any sort of chocolate bars.

Line a baking tin with greaseproof paper (I used a slice tin but it was a bit big so I would use a 20cm square tin next time).

Crush the chocolate ripple biscuits to coarse crumbles and chop the peppermint crisps.  Mix with coconut and condensed milk.  Scrape into prepared tin.  Chill in freezer for an hour or so.

Put a drop or two into the coconut and rub it in to make the coconut green if you want to colour it.  Melt chocolate and butter together.  Spread over chilled slice and then sprinkle with coconut.  Chill in the fridge.  (I did this overnight but I think 4-6 hours should firm it up.)

Eat cold and firm or at room temperature and soft depending on your preference.

On the Stereo:
Discrete Music: Brian Eno
Posted by Johanna GGG at 23:20