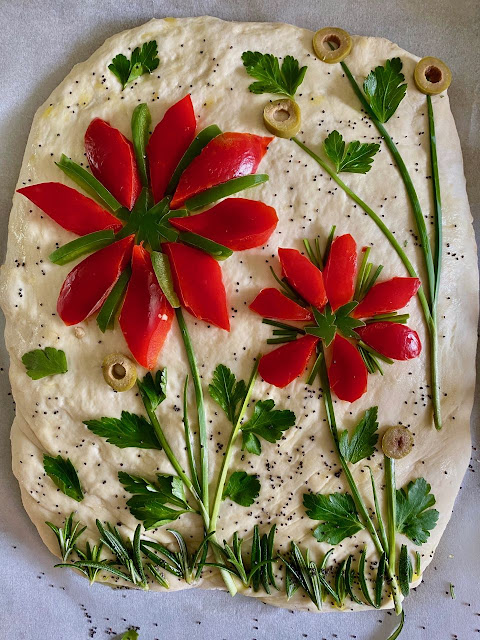 I wish I could be more excited by August but I am wary and tired.  July was a very unsettled month.  Our Covid19 restrictions tightened a few times, school went remote again, masks in public became mandatory, we have an 8pm curfew (which would bother me more if there was anything to do out of the house in the evenings), Sylvia had a week of illness, we both got tested for Covid19 (and to our relief were negative), a few people around me worked with people with Covid19, Sylvia's school had a diagnosis, and the numbers of daily diagnoses got as high as the 700s.  All our relief at Melbourne doing well in June has dissipated.  Compared to may other countries, it is not so terrible.  However, the disappointment of too many people flouting the restrictions means too many discussions about the whys and whos of responsibility.  No wonder I have so little energy for blogging.

At home, we have been enjoying comfort food (pizza, sourdough bread, brownie in a mug), trying to eat more fruit by drinking more smoothies and experimenting with some new recipes.  Above is a failed experiment with a an old recipe.  I took an overnight sourdough bread and tried to pretty it up (inspired by Lorraine and VegHog).  I didn't flatten it properly or cook it enough.  I will try again and remember not to prioritise style over substance. 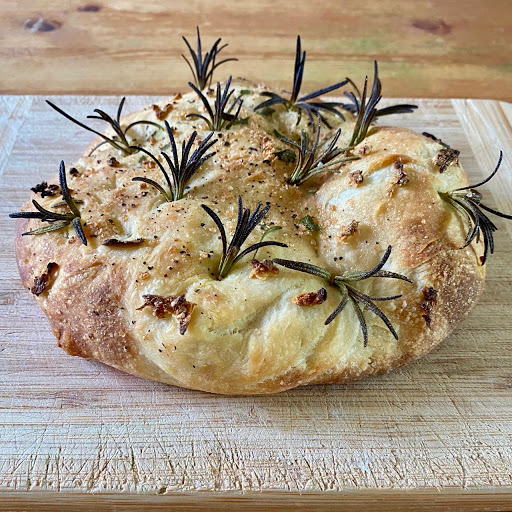 On the same afternoon, Sylvia made a far more successful smaller rosemary and garlic focaccia.  She used a corner of my dough and decorated it with rosemary sprigs, gold salt, and crushed garlic.  It was cooked until it was lovely and golden brown.  I had focaccia-envy! 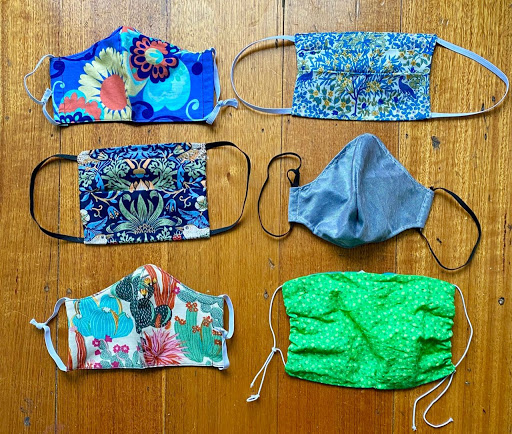 As I mentioned, face masks are mandatory.  Here are mine.  I made one (green), a friend who sews made another (grey), I bought a couple (large flowers) from ebay, and a couple (smaller flowers) from the Johnston Collection but I am not sure if either are selling any more.  They are preferable to disposables but still fog up my glasses and can be stuffy after being out for a while. 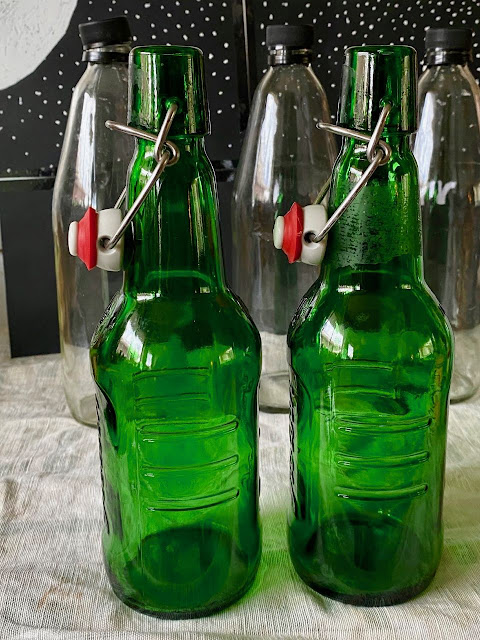 Last month I mentioned I had dabbled in making kombucha.  I confess my scoby is quite neglected but I am doing a great job of collecting bottles.  Just in case the mood takes me, you know! 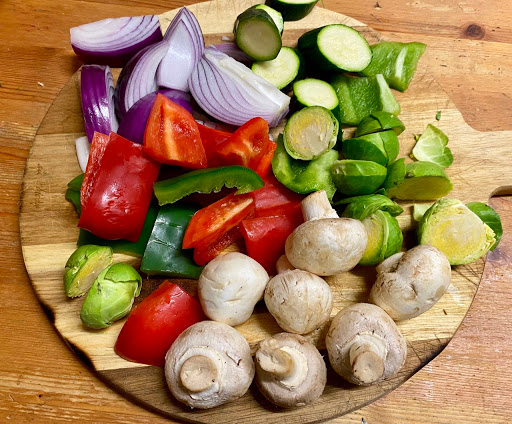 I am not cooking that often but I do the occasional big casserole or stew that can last a few meals.  It can take a while to chop the vegies but a colourful pile of vegies always makes me happy.  These vegies were chopped up for Jacqueline's Roasted Vegetable and Rice Bake. It lasted quite a few meals but was not quite right for me.  Possibly due to my changes! 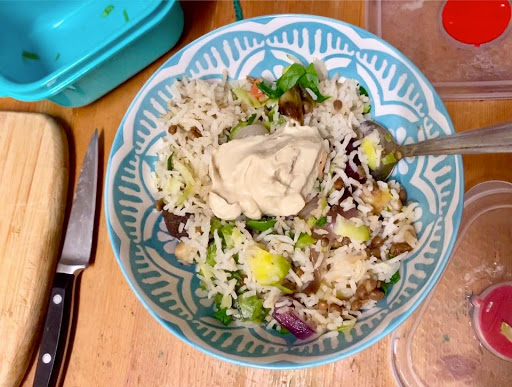 I changed around the Roasted Vegetable and Rice Bake recipe, using a tin of brown lentils rather than corn mixed in with the rice and added a bit more water.  Even so I found it a bit dry.  You can see above that I needed some add ins but it didn't need much to make it a meal.  One night I  added some leftover pasta sauce.  On the occasion that I took the above photo I added some hummus and some brussel sprouts.  But I love Jac's idea of roasting veges over oven-baked rice so might give it another go! 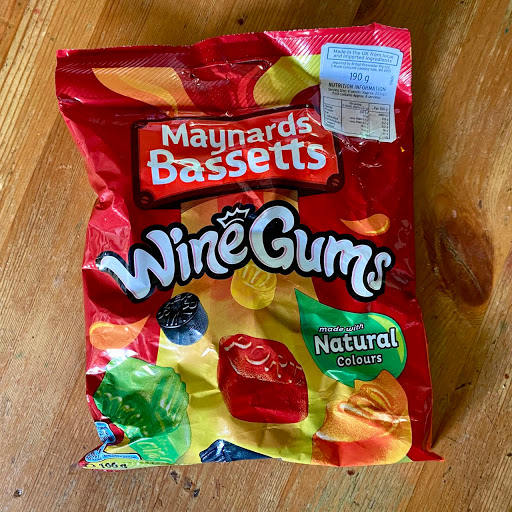 Aldi supermarkets recently had a special on British foods and Sylvia brought home some wine gums.  They were not quite the rght texture.  So when I saw a packet in a local supermarket I bought them for her.  These were the real deal, soft but slightly chewy.  Unfortunately they have gelatine in them (ie not vegetarian) so we had them for a treat but are unlikely to have them much. 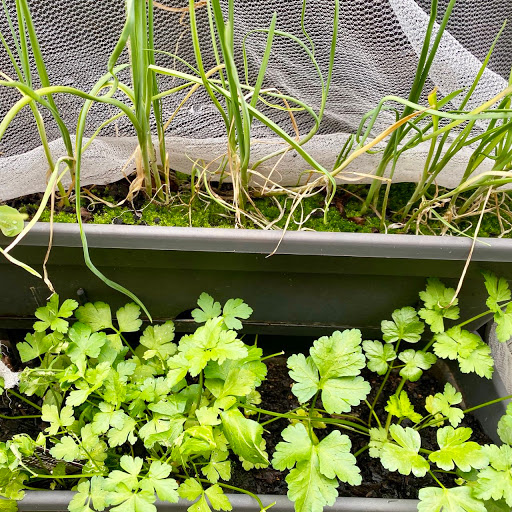 A photo of the garden before we used quite a bit of parsley.  I have had so much bad luck with parsley that I still get excited when it regrows.  And the straggly baby leeks above have hung around for a few years and continue to help out when I need spring onions or chives. 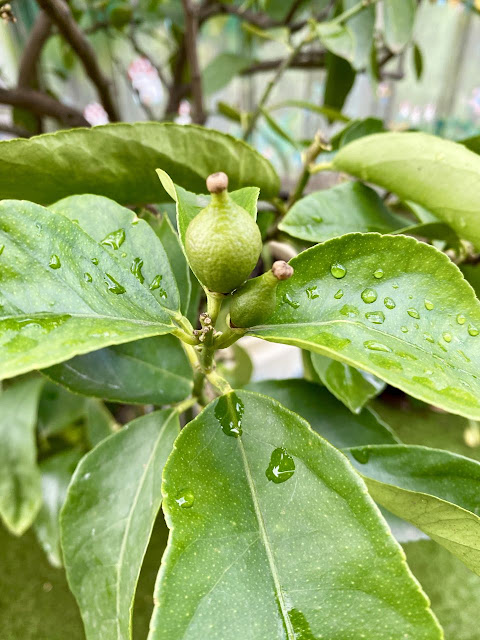 Our lime tree went gangbusters a month or two ago and now it is starting to grow more fruit.  I really need to give it a bit more care but am amazed at what it produces even when slightly neglected. 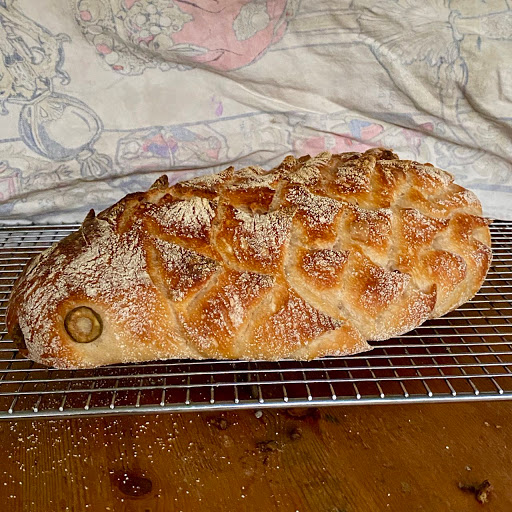 Back in lockdown and still making sourdough bread.  This loaf was made in the shape of a hedgehog with olive eyes and some snipping at the dough with scissors to make spikes.  It was fun to make and the "spikes" made it easier to cut because my breadknife didn't slide over the loaf as it often does. 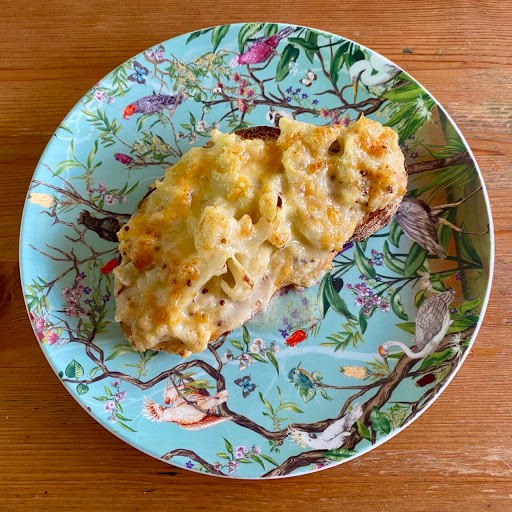 I made cauliiflower cheese recently because it is great winter comfort food and I had a cauliflower that needed using.  Then i ate some as a side dish but one or two nights I just piled cauliflower cheese on toast with a bit of extra cheese and put it under the grill on low so it heated through.  A great lazy but warming meal. 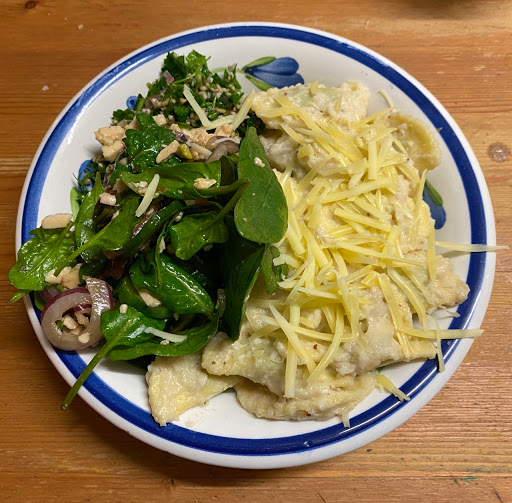 On another night when I didn't have much cauliflower cheese left and had eaten enough of it, I blitzed it into a sauce with a blender and tossed it through some ravioli.  I served it with salads leftover from our Christmas in July lunch.  The salads were great but the pasta was far too rich and I ate some of it for lunch the next day. 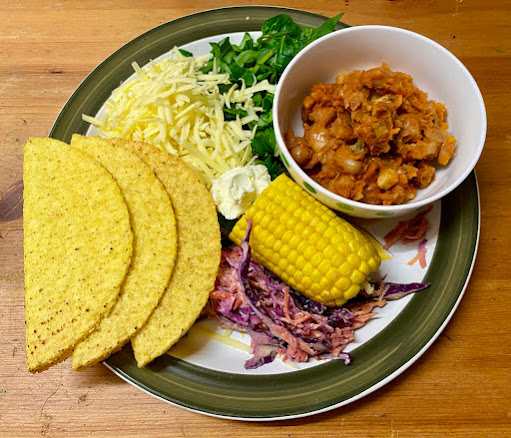 Recently Sylvia and I have been doing Taco Tuesday (with the occasional Waco Wednesday when Tuesday does not suit).  Tacos are such a great sharing dish.  We can put out some fillings and share at least some.  I really loved the above plate of tacos, cheese, spinach, rapid refried beans, corn, coleslaw and sour cream. Sylvia's latest taco of choice is fried egg, sour cream, grated cheese and occasionally lettuce. 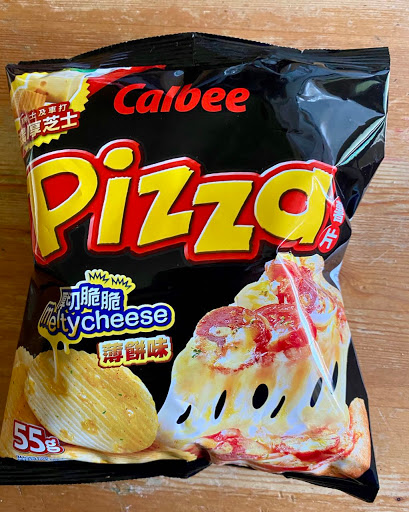 I bought this Japanese packet of Pizza Crisps at my local supermarket in the international aisle.  I was fascinated by the idea of lumps of melty cheese on the crisps.  Sadly the packet lied and inside the chips were covered with a an orange powder rather than lumps of melty cheese.  Nice but not as special as I had hoped. 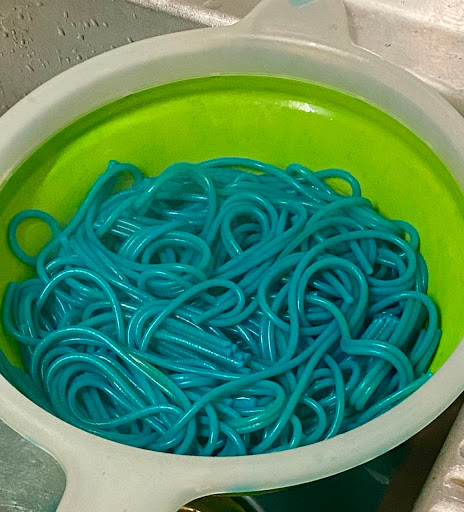 Sylvia was online getting ideas for messing up the kitchen one night a few weeks back.  I think I was on a phone call when she asked if she could make blue pasta.  I nodded and came out to find she had made this blue dyed pasta.  It looked pretty amazing.  The kitchen looked interesting too.  Thank goodness she is getting better at cleaning up after her culinary fun! 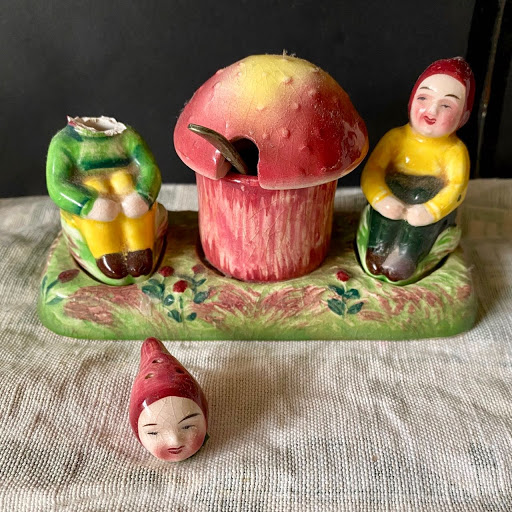 If I am not challenging by a child leaving a trail of mess behind her, I have a cat who likes to bat anything off a table or shelf.  I have a shelf with knick knacks on it next to the sofa.  He stands on the edge of the sofa and has a go at whatever he can reach.  I could forgive him dashing a street car magnet from San Fransisco to pieces but when he beheaded an elf from a salt and pepper set I had bought at a local trash and treasure as a kid in primary school I was most displeased.  Tonight I have put the head back on with superglue but now I need to find a place for it that is safe from the cat.
I am sending this post to Sherry of Sherry's Pickings for the In My Kitchen event, that was started by Celia of Fig Jam and Lime Cordial,  I am grateful to Sherry for soldiering on despite all the upheaval as In My Kitchen is always a fun event. If you would like to join in, send your post to Sherry by 13th of the month.  Or just head over to her blog and visit more kitchens.
Posted by Johanna GGG at 23:25