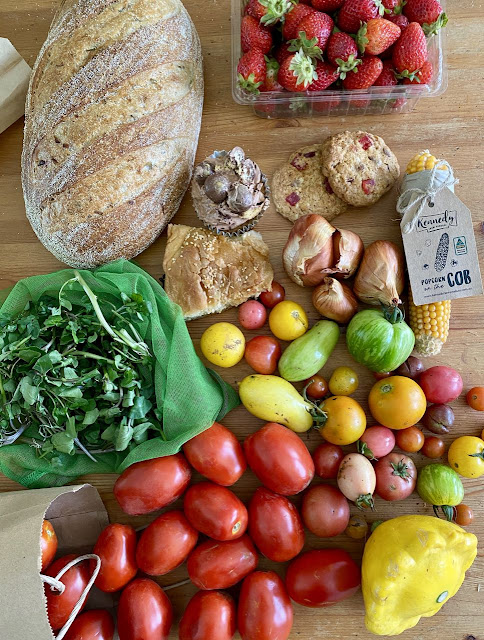 Life continues to feel apocalyptic this March.  Hot on the heels of bushfire stress, comes corona virus paranoia and the likelihood of recession.  For me work has been busy, life has been tiring and we have had too much ill health at home.  I am trying to combat such low energy with the purchase of an e-bike.  It also reduces the time spent on crowded public transport! But for now I have an appetite and money to spend on it, so let's take the monthly peek into my kitchen!

Above is what I bought at the local Farmers Market.  Lots of tomatoes.  The Heirloom ones were delicious and so pretty.  I still have chutney plans.  Watercress is in desperate need of use in my fridge.  I had so many grand plans that were thrown last week when Sylvia had a cold most of the week. 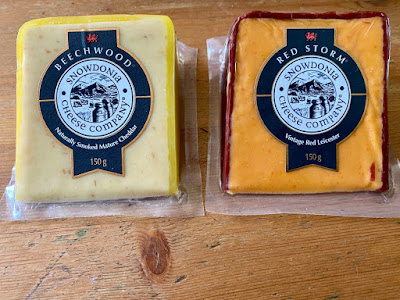 I liked the look of these two cheeses from Snowdonia.  Smoked mature cheese and Vintage red Leicester.  So far the smoked one has gone into bread and I am thinking of more bread with the red Leicester.  Stay tuned... 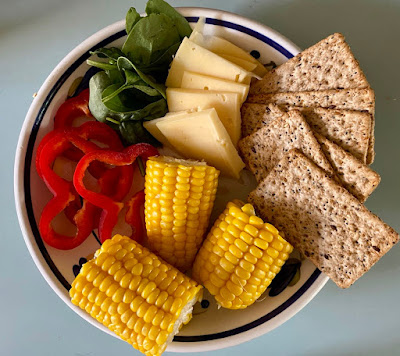 A simple meal of vegies, cheese and vegies because I don't always have the energy to cook a lot after work. 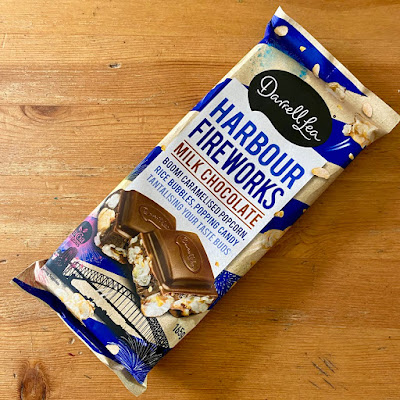 I bought this Harbour Fireworks chocolate on special.  Maybe it was leftover from New Year's Eve.  The popcorn, rice bubbles and popping candy were fun but not so amazing I had to race back for more. 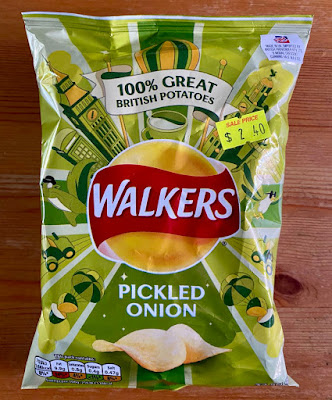 I also was tempted by this Walkers pickled onion crisps in Treats From Home because it was just so British and unlikely to appear in any supermarket.  It was quite vinegary but tasty.  Imagine these on a ploughman's platter! 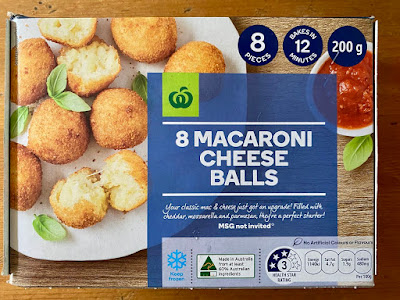 Sylvia's latest love is Mac and Cheese balls.  Sometimes we buy them from the supermarket and sometimes we get them at Lord of the Fries.  However I made her mac and cheese when we went to my parents on the weekend and she would not eat it because it had too much dairy.  Which means she likes it when I make it at home where we have soy milk but not when it is full of dairy milk. 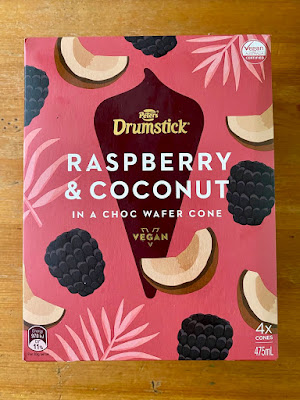 I was interested to try these vegan raspberry and coconut drumsticks on one of the last hot spells of February.  They were pretty good but I am not a huge drumstick fan and so I could not see myself eating these regularly whether vegan or not. 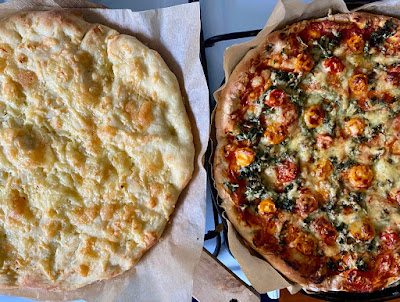 I had some kale in the garden that I had been ignoring.  Finally I microwaved it and put it on pizza.  It was really good and now there is more kale growing I am thinking this is a good easy plant I should grow more in the garden. 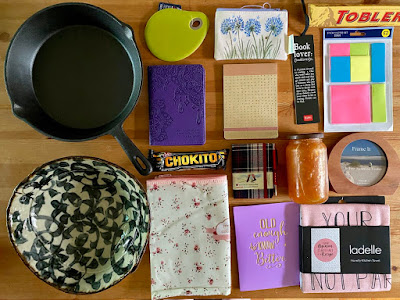 Some birthday presents.  I really like the cast iron frypan but haven't used it much as I haven't been using frypans much and am still weaning myself from non-stick to cast iron.  I love the Japanese bowl and all the little goodies.  That avocado shaped scraper is so cute! 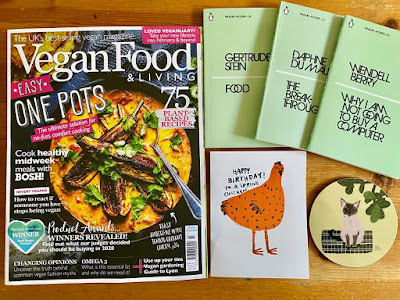 A few more birthday presents that arrived late from my sister in Ireland.  It is a really good Vegan Food magazine issue and I am looking forward to reading "Why I am not going to buy a computer." 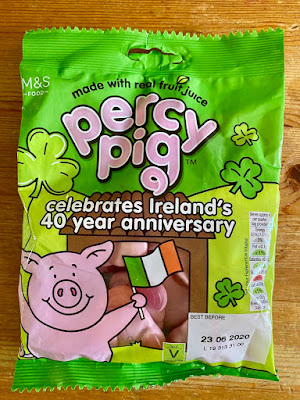 These Percy pig lollies (sweets) also came from Ireland.  We were quite unsure what the 40 year anniversary was but a quick Google found that it is 40 years of Marks and Spencer in Ireland!  Who would have guessed that from the packaging.  Anyway it feels like a little bit of Ireland for the upcoming St Patrick's Day.  I guess this might be as exciting as it gets in Ireland with the corona virus shutting down St Patrick's Day parades! 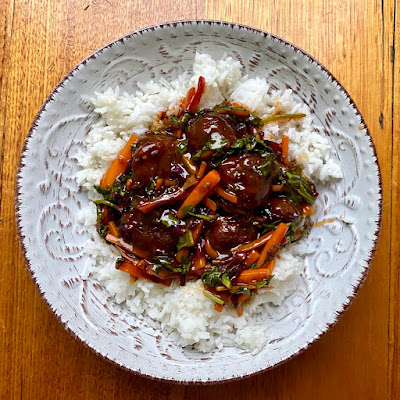 I made sweet and sour cheatballs with some veg meatballs that I found were past the best by date.  I was pretty happy that I managed to use up the cheatballs and the sweet and sour sauce that I had made for some other vegies and had leftovers. 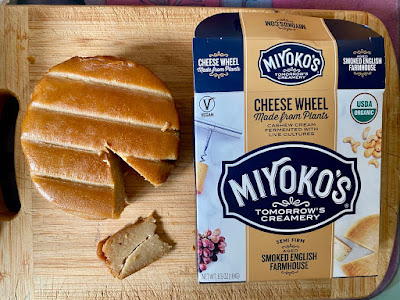 I was so excited to see Miyoko's Vegan Smoked English Farmhouse Cheese Wheel in the supermarket.  She has an amazing reputation (and cookbook) in vegan cheese making, so I was so eager to try her product.  Sylvia was interested but found it tasted too much of nuts.  I found it too sharp and not enough of the mellow smoothness of cheese.  Sadly I have to report that I have had better.  It is still pretty good with crackers. 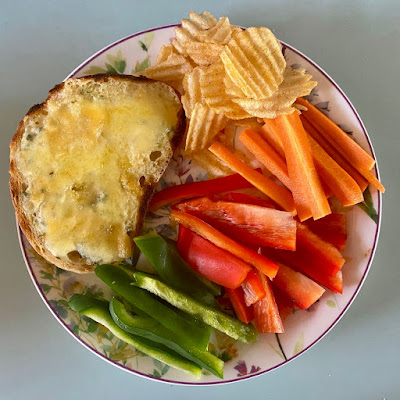 And I leave you with one more simple meal.  Sylvia and I have been rather partial to garlic cream cheese and grated vintage cheese melted on toast lately.  It was paired rather tastily with crisps and vegie sticks.

I am sending this post to Sherry of Sherry's Pickings for the In My Kitchen event, that was started by Celia of Fig Jam and Lime Cordial,  If you would like to join in, send your post to Sherry by 13th of the month.  Or just head over to her blog and visit more kitchens.
Posted by Johanna GGG at 22:29