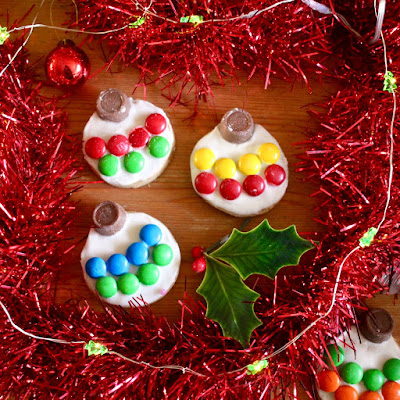 Christmas bauble biscuits in August probably seem quite unseasonal.  Yes and no!  I am still catching up on our Christmas in July lunch posts.  These bikkies (that my daughter insists on calling cookies) were made to eat after the lunch.  They were easy to whip up and good for making with children.  We tweaked the biscuit dough from Easter and had so much that half of it sat in the fridge for a few weeks until we had a need for cat biscuits for a cat birthday party. 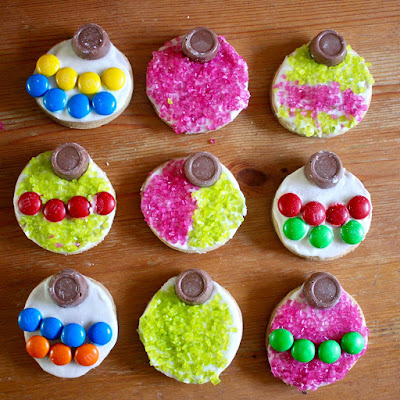 Sylvia and I had different ideas on how to decorate the biscuits for our Christmas in July lunch. I went with the minimalist M and Ms on white, while she went all out with sprinkles.  Both worked.  They were enjoyed at the lunch.  I liked that we gave them a little more flavour than the ones we had made at Easter. 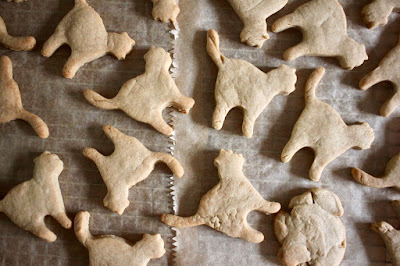 However, like the biscuits we made at Easter, we only used half the dough and put the other half in the fridge to make later.  When we had taken out the biscuit dough after Easter it was so hard, we could hardly roll them out.  With this batch, I took the dough from the fridge on a day I had planned to bake but got waylaid so it went back in.  This worked well when we took it from the fridge the next day and it was firm but not rock hard. 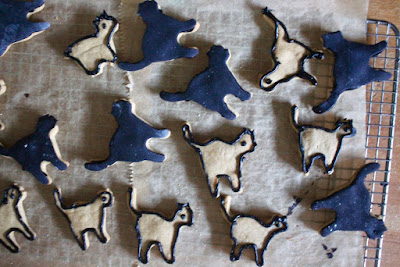 We made the second batch of biscuits with the Christmas in July dough when Sylvia decided to hold a cat birthday party.  I will write more about the "party" soon.  You can see that our attempts at piping the outline of our cat biscuits was not so great.  I thought they looked more like sheep or goats.  Rolling out the fondant and cutting it with the same cutter worked much better.  The biscuits are not very sweet so some sort of decoration balance this. 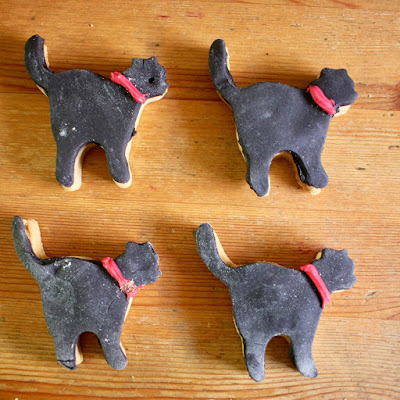 I am very fond of this biscuit recipe and hope to experiment a little more with it.  It is one of the good things in my life along with other things like Sylvia's pride in her own library card and finding a stamp in my purse when it spilled its contents in queue to buy a stamp at the post office.  Little stabs at happiness are very welcome at the moment while life is very busy and I despair every time I look at the news.  One of the nicest things about these biscuits is that they are easily vegan but originally from a mainstream magazine.  I had looked for some good vegan biscuits and found this a challenge.  However I can see this becoming a go-to recipe and highly recommend it.

Cream butter, brown sugar and molasses.  Gently mix in remaining ingredients until they clump together.  Use your hands to bring this together into a ball and knead a few times until the dough is smooth.  (This could be done in the food processor too.)

Wrap dough in clingfilm and chill in fridge for at least 30 minutes.  (We left the second half of the dough in the fridge for about 3 weeks.  I took it out the day before I used it and brought it to room temperature.  Then I returned it to the fridge overnight and it was easy to roll out.)

To decorate: Spread cooled biscuits with white icing (we made ours from icing sugar, boiling water and little butter but if you want absolutely white do not add butter or you could use royal icing), place a disc or rolo at the top of the circle and then decorate with rows of different coloured M and Ms.

VARIATION: CAT BISCUITS
These biscuits can be cut into other shapes.  We used the second part of the dough to make cat biscuits.  Trying to pipe around the outline of our cat shapes was not so successful.  For some we rolled out black fondant thinly and cut out with the same cookie cutter, then piped a bit of icing around the outline and inside of the cookie and put the fondant on top with a red line of icing piped around the neck to be a collar.