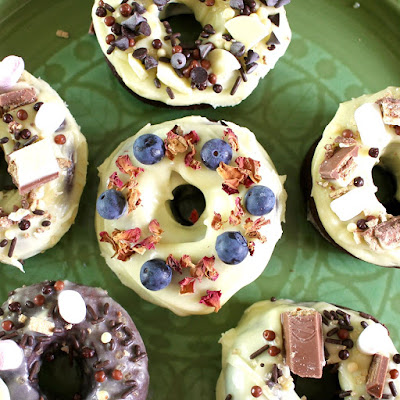 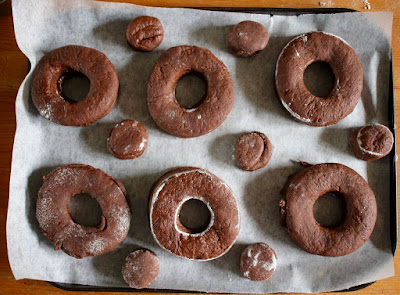 It's ironic really because I baked them to watch the AFL footy grand final.  Sausage rolls, doughnuts and lemonade are pretty standard fare for watching the footy but not the recipes I served.  Our sausage rolls were vegetarian, our lemonade wasn't that sweet and our doughnuts were both vegan although I topped them with a white chocolate ganache and some milk chocolate decorations.  Perhaps this is why I don't watch footy as a rule.  Except the grand final.

And I like to watch the grand final.  Especially when it is exciting.  Though it is better to watch without football fanatics whose team loses.  This year, like last year, was the year of the underdog.  The Richmond Tigers had not won a final since 1980 and The Adelaide Crows were favourites.  Working with a few Tigers fans meant the anticipation was palpable.  My boss told us that if we wore a Richmond jumper all week we didn't have to come into work.  One colleague turned to Ebay immediately to see how cheaply he could buy a jumper! 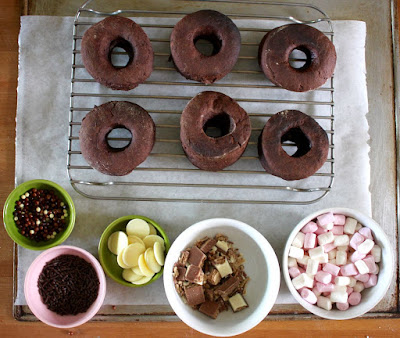 On the day, Sylvia and I made these doughnuts we promised one to my neighbour as part of the pre-match entertainment.  I was disappointed that they burnt slightly but the recipe was good enough to withstand it.  Sylvia scootered over to the supermarket with me to choose some toppings.  Unfortunately she accidentally picked up tiramisu kit kat and reminded me why I don't like coffee flavoured food. 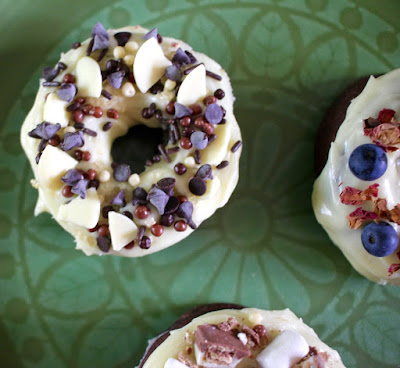 We whipped up a white chocolate ganache and I was very pleased with my rose petal and blueberry decoration.  You might notice that we were influenced by the fancy doughnuts shops around Melbourne.  We even named our doughnuts.  The rose petal blueberry was The Roseberry! Or perhaps it could have been Roses are Red, Berries are Blue.  Or The Roses got the Blues.  Hmmm...  I think I would need to work on some better names if I had a doughnut store.  In fact even the naming of these doughnuts is a bit long and prosaic: chocolate overnight baked sourdough doughnuts.  I really should do some work on naming recipes!

But I digress.  We offered a doughnut to our neighbour when she came into watch some of the pre-match entertainment and the first goal.  She enjoyed her doughnut.  Which was probably just as well, give that the Crows were ahead in the early moments when she went off to do some chores.  We shook our heads sorrowfully about Richmond's propects as she left.  By the time she returned towards the end of the fourth quarter it was a different story.  The Tigers had thrashed the Crows. 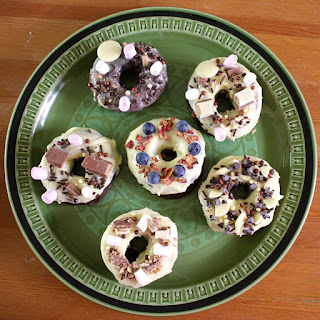 I really loved the white chocolate icing on the chocolate doughnuts.  A cream cheese frosting or just vanilla icing would be fine too.  We didn't bake all of the doughnuts.  About half went into the freezer for another day, once they had risen.  Both halves of the batch baked a bit too tough on the outside.  I think perhaps the batter needs a bit less flour and a bit more liquid (as my mum suggested) though the mixture was already sticky so not sure how much stickier it can get and still be workable.

If I had my druthers, I would be concentrating all my doughnut energies on the chocolate variety but I suspect Sylvia and E might have other ideas.

I am sending these doughnuts to Baking Crumbs and Treat Petite.

Remove starter from fridge a few hours before using to get nice and bubbly.  When ready to put ingredients together, melt butter with coconut milk.  Cool slightly to lukewarm.

Mix all ingredients in a large mixing bowl.  It will be quite sticky but should come together into a ball.  Cover with a tea towel for 30 minutes and then knead about 15 minutes in the bowl with well floured hands.  Cover with greased clingwrap and leave overnight about 8 hours if the weather is good.  It should be about double in size.

In the morning, carefully scrape the dough out onto a floured surface.  Using floured hands pat down to about 1 cm thickness.  Cut out using a doughnut cutter or just cut into rounds or whichever shape you like.  Place shapes on baking paper on a tray and leave covered (I used the clingfilm off the mixing bowl) for 1-2 hours until the dough has got a little puffy.

About 15 minutes before dough is ready, preheat oven to 200 C.  Cover doughnuts - I use foil but if you have a large dish with a lid that is fine.  Bake doughnuts for 15 minutes, remove foil or cover and continue baking for a further 10-15 minutes until they smell cooked and sound hollow when tapped.  Watch them once uncovered as they can burn.

Cool on a wire rack.  Frost and decorate as desired.  Best eaten on day of baking.

NOTES: We frozen some after they rose the second time and then took them out and left them 5 hours before baking - they didn't need that long but they were ok for sitting around though not quite as good as the ones we baked immediately after the rise.  The mixture is a little tough on the outside when baked - because mixture is too dry or because I used more sugar?  I have experimented with baking times and can't really reduce it so will experiment with recipe if I get a chance - but I liked them very much despite this.  We iced with white chocolate frosting that was a few dessertspoons each of white choc chips and margarine, then I stirred in enough icing sugar to make it spreadable and a little bit of milk if it got too stiff.  Cream cheese frosting or buttercream would also work.

On the stereo:
At First Sight: the Stems
Posted by Johanna GGG at 22:25