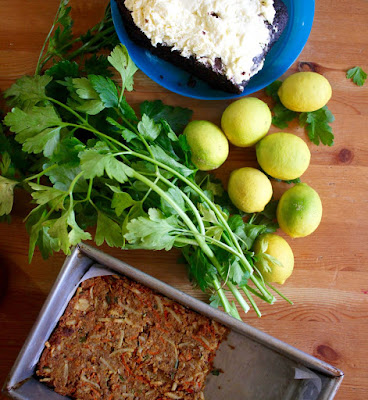 October was a busy month.  The sun came out and it was time for holidays, Halloween and birthdays.  November has returned us to chillier weather and found us with the shops laden with Christmas merchandise and Sylvia laid low with a bad cold.  This month's kitchen peek shows some of the busy times, lots of fancy groceries and some of our everyday food.

Above is the kitchen table after returning from lunch in Geelong at my parents.  At the top is a slab of Guinness chocolate cake with cream cheese frosting that my mum made.  In the middle is parsley and limes from my brother in law John's garden.  At the bottom is leftover carrot and smoked cheese nut roast. 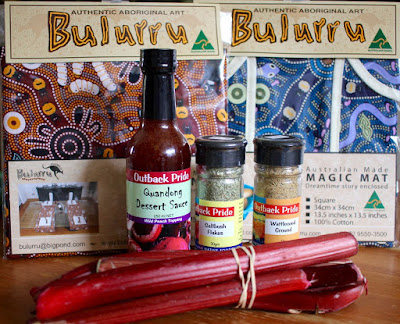 While we were at the Grampians last month I got into purchasing bush foods at the Brimbak Cultural Centre.  Quandong dessert sauce, saltbush flakes and ground wattleseed are not foods that I generally see about.  Unfortunately I haven't had much time and energy for enjoying them.  The same can be said of the rhubarb and the kitchen linen with Aboriginal designs.  Perhaps when Australia Day rolls around in January I will be inspired. 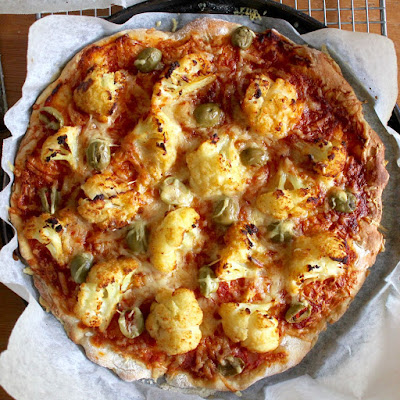 I enter spring with great expectations that I will eat so much more fruit and vegetables than in winter.  It usually takes a while to change habits (because the weather also takes a while to change).  This pizza base, as well as the usual tomato sauce and cheese, has some cauliflower that had been around for a while as well as a half open jar of olives.  It was really lovely. 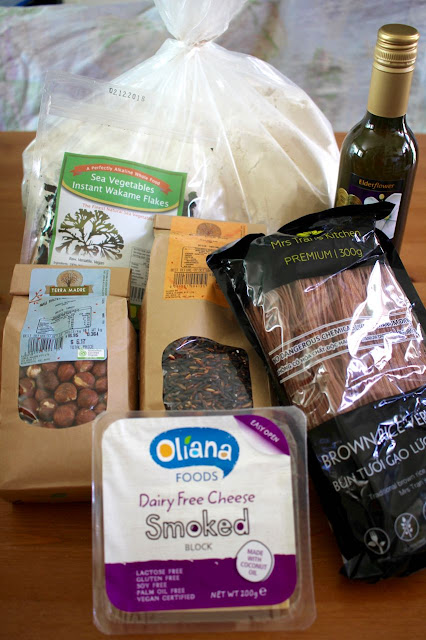 I enjoyed a shopping expedition through Terra Madre in Northcote.  It is such a hipster health store.  Lots of unusual products.  Crazy prices.  At least the queues were better managed than last time I was there.  I was quite excited to buy 5kg of white spelt flour for $25.  It is the cheapest spelt flour I have found on my recent search.  Not a great addition to the kitchen floor!  I also bought elderflower syrup, hazelnuts, dried strawberries, wild rice, brown rice noodles and Oliana vegan smoked cheese.  I was curious about Oliana vegan cheese as it seems to be popping up in quite a few shops.  It worked as a melty cheese but was not so good when cold just sliced on bread. 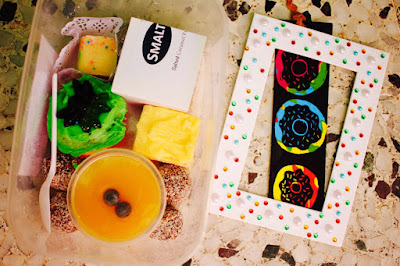 Sylvia's school had an Art Fair with a BBQ, craft activities, a cake stall an lots of displays of the kids' artwork.  It was fun but in an overwhelming way.  Sylvia made a frame and bookmarks.  We also came away with goodies form the cake stall: mango jelly, lemon slice, grunbs, creepy cupcake, fudge with sprinkles and salted caramel fudge.  I helped out on the cake stall for a while and it was so busy I never stopped. 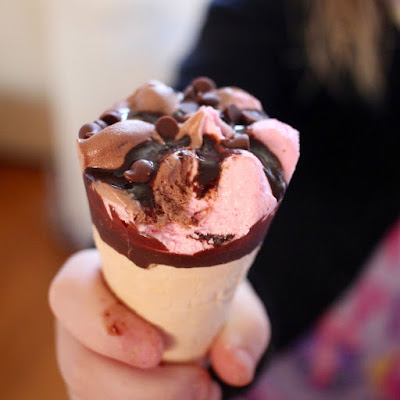 Sylvia finally got her heart's desire in ice creams from the supermarket and had a choc strawberry cornetto.  I enjoyed it but wasn't as delighted with it as she was. 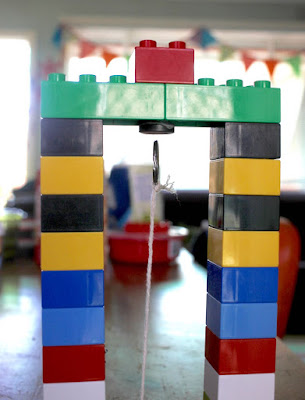 One weekend recently Sylvia put together this little structure while playing with magnets.  We were all quite fascinated with the little gap between the metal ring and the magnet stuck under the lego arch. 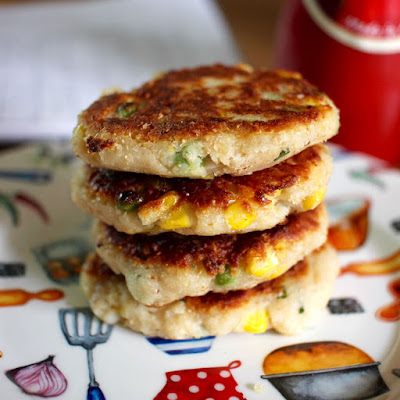 I couldn't wait to try Jac's Easy Cheesy Vegetable Potato Cakes because with the corn and peas, they reminded me of the recent pot pies that Sylvia had liked.  I was a little slapdash with following the recipe so I take responsibility for these not working well.  They just collapsed every time they went near a frypan, even after being in the fridge.  So finally I gave up, added some flour (a la potato scones) and enjoyed the last of the batch. 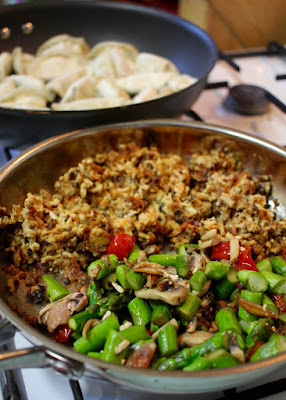 Another recipe disaster that I managed to save were these Teriyaki Tofu Balls.  Again I took liberties with the recipe and so it is my fault they did not work.  Once I fried them they collapsed and became the tastiest teriyaki tofu scramble so I will have another go at that some time and report back with more details of what I did.  I served it with some vegies and some dumplings from the Asian shop freezer.  It is the first time I have managed to fry and steam dumplings perfectly.  At least I could be proud of that! 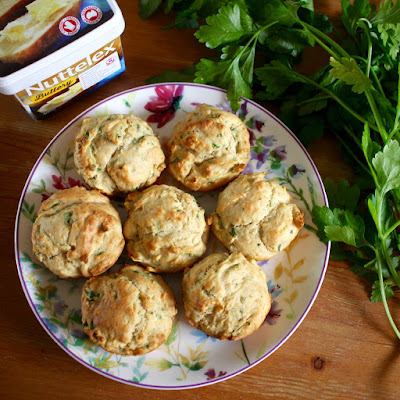 When I really love a recipe, I am unhappy if I only manage to take a photo on the run.  As I have said before, I don't always get the chance to make a recipe over and over to check it and take the best photos.  But when a recipe is made often, I get the chance to update a post with notes and better photos.  As is the case with these cheese and parsley muffins that I made earlier this year.  We make them so often that it was only a matter of time before I found the energy to take some better photos to use.  I made these using the Oliana vegan smoked cheese that I mentioned above. 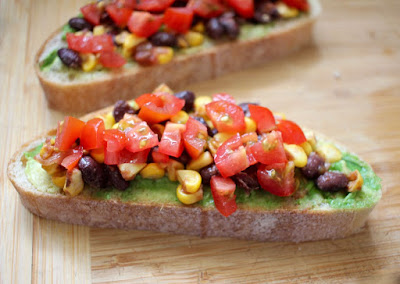 Last night we had tortillas for dinner.  It was really quick.  I mixed cooked corn, black beans and salsa, made a coleslaw and sliced some avocado.  This morning, I had a lovely breakfast with mashed avocado, the corn-black-bean-salsa mix and some chopped cherry tomatoes on ciabatta.  My only complaint is that the black beans came from the supermarket - the first time I have seen them there - and Edgell just never cooked beans enough for me.  Sigh! 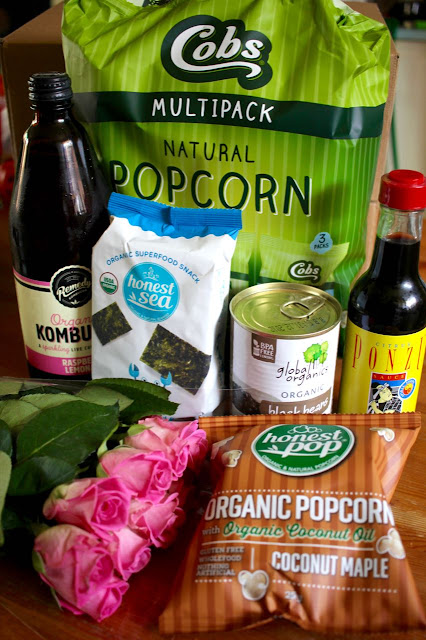 Today we went to Carlton to eat churros and watch Battle of the Sexes at the movies.  (Yes I took Sylvia to a movie about Billy Jean King's tennis match against Bobby Riggs because there were no kids movies on the big screen unless we went out to the suburban shopping centres!)

Afterwards we had a browse in the new Aunt Maggies where the food court used to be in Lygon Court.  We came away with a 10 pack of popcorn plus a fancy coconut maple popcorn (which smelled amazing and tasted almost as good), black beans (proper soft ones), raspberry lemonade kombucha, seaweed snacks, ponzu sauce (that was very good in tonight's stirfry) and a free bunch of roses.

I am sending this post to Sherry of Sherry's Pickings for the In My Kitchen event, that was started by Celia of Fig Jam and Lime Cordial,  If you would like to join in, send your post to Sherry by 10th of the month.  Or just head over to her blog to peek into more kitchens.
Posted by Johanna GGG at 21:39