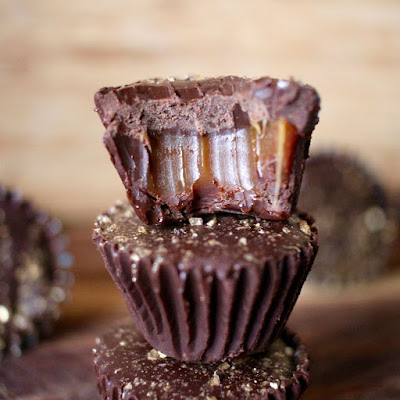 These chocolate nutella caramel cups are so good that I want to curl up in a cosy chair with the whole tub and gobble them up.  Maybe it is just as well that they are so rich that even my chocolate loving stomach could not handle such indulgence.

In fact, it is hard to justify making such decadent delights.  But life is just begging for them when you have caramel sauce from the farmers market, gold salt to show off and our wedding anniversary in a week of birthdays. (Seems like it wasn't so bright to just let both our witnesses tell us when it would suit to get married in the registry office.) 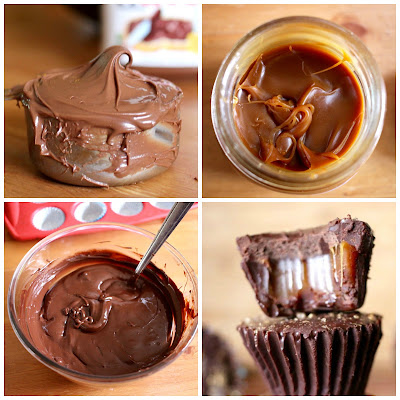 It is embarrassing that they have so few ingredients that if I called them more accurately Salted Chocolate Nutella Caramel Cups, the name of the recipe would have more words than the ingredient list!  So I left off salted, partly because everyone adds salt to caramel these day.  Don't they!

I had been swooning over a recipe for these chocolates which included caramel made from scratch.  But I had to buy the jar of caramel sauce at the farmers market just because it was made by someone called Sylvia (and we don't often cross paths with people who share a name with our own Sylvia).  So it seemed crazy to go and make my own caramel.  That frees up a little time for birthday messages. 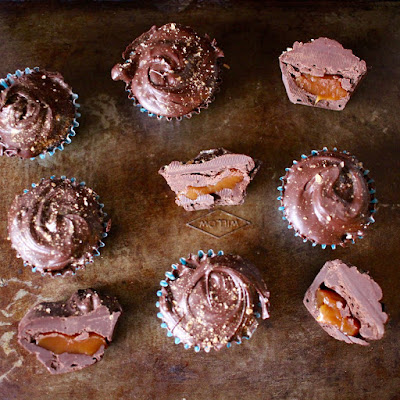 The recipe claimed it made 12 cups in mini muffin tins.  Mine made 36.  Which was just as well.  The above photo is of the first 12 that I made before I ran out of energy.  There was too much chocolate and not enough caramel.  It took a few days to make the rest of the cups.  When I did I packed in more caramel and was much happier with the ratio. 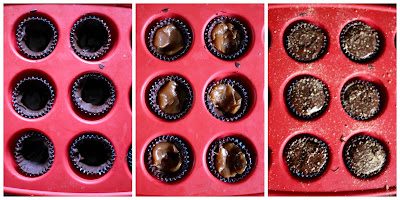 The combination of chocolate and nutella works brilliantly (unless you are catering to nut allergies).  The nutella makes the chocolate easier to handle.   I left the bowl of chocolate at room temperature for a couple of days and then melted it when ready to make more and it was still good.

It also means that the chocolate is still creamy when kept in the fridge.  We tried keeping them out of the fridge which made them softer but I did like how chewy the caramel was when chilled.  It also makes them easier to take out of the cupcake papers. 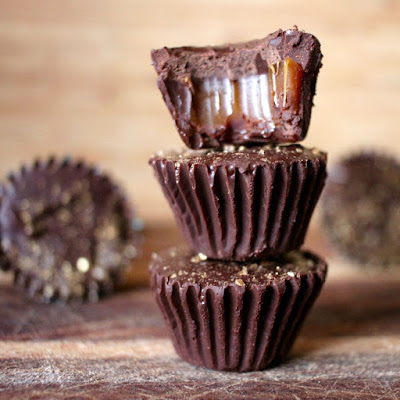 I gave them to my mum when she visited and she had to bo back for a second.  I took some in to work because we had so many.  And we still have quite a few in the fridge.  They would make great gifts.  After all, it is only 100 days until Christmas.  But you don't have to wait for the festive season to kick in to make these.  I can't think of a better way to impress your friends and make any day a celebration!

It is six years of We Should Cocoa, one of my favourite blog events that brings together chocolate loving bloggers.  I am sending these chocolate cups along to Choclette to celebrate all those years of sharing chocolate recipes.

Check out more of my nutella recipes on Green Gourmet Giraffe.

Melt chocolate and nutella together.  Line 3 x 12 cup mini muffin trays with mini muffin cupccake papers.  Use a brush to coat the edges of each cupcake paper.  Place in fridge until set (10-15 minutes).  If there are any edges that are too thin, patch them up when out of the fridge and return to fridge to set.

Drop about 1/2 tsp of caramel sauce into each cup.  If the caramel is too gooey, set in fridge.  (Mine was quite thick and didn't need setting.)

Top with a little more chocolate to just cover the caramel. It should be runny enough to flatten out.  Sprinkle with salt flakes straight away before chocolate sets.  Return to fridge to set hard enough to rip the cupcake papers off chocolates.  Keeps at room temperature or in fridge.