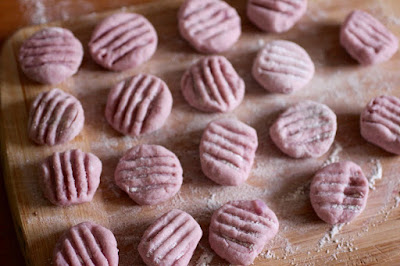 Gnocchi sits way outside my comfort zone.  I sometimes buy it ready-made but it has been a long time since I tried making.  Finally I was led to try it again by a large bag of potatoes, a large pot of leftover mash and a Google search. 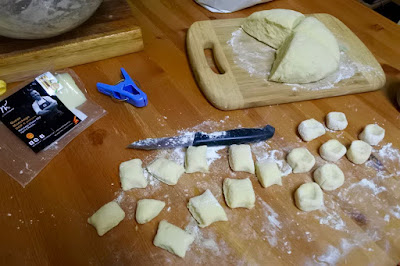 The first time I made it, I had put truffle oil in the mashed potato and really liked that it gave the gnocchi a slight but interesting aroma.  The second time I tried, I had run out of truffle oil but I had some red fleshed potatoes to play with.  Sadly they turned out to be more pink than red.  They were interesting all the same.  The second time I used aqua faba instead of egg but have since read that egg is not so necessary.  I have also read that it is best made with cold mashed potatoes. 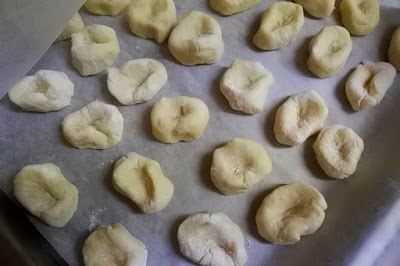 I don't mind making gnocchi dough but the shaping is challenging.  The first time I made it I rolled the dough into balls and made a dimple with my thumb.  Sylvia saw me making it and had fun helping out.  The second time I tried making balls and pressing them with a fork.  I think this is not quite so traditional as rolling the gnocchi over a fork or ridged board but life is too short and the gnocchi was a bit sticky.  The dimples were easier.  Sylvia said she preferred the white gnocchi. 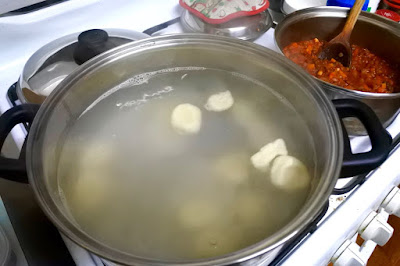 Yet with both the white and pink gnocchi, Sylvia was fascinated with cooking them.  She wasn't very comfortable with dropping them in.  It was a choice between keeping your hands well away from the boiling water and having it splash over you when they hit the water from afar, or holding them very close to the boiling water and having them go in with barely a splash.  She didn't like either option.  She did love scooping them out when they rose to the surface. 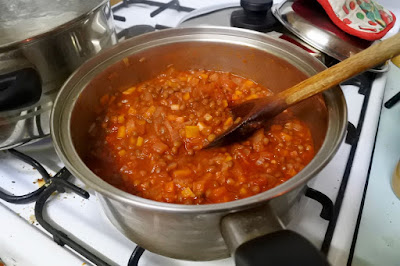 The first lot of gnocchi were served with a tomato and lentil sauce and some brussels sprouts.  Sylvia enjoyed the gnocchi but not the sauce.  I quite liked it and so did E.  I don't think he was so keen on eating the second batch with pesto.  I too preferred the tomato sauce. 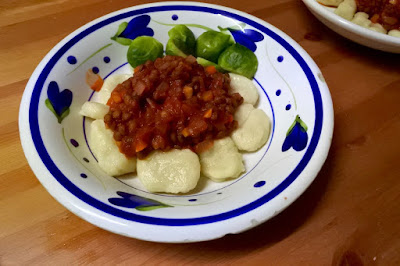 My biggest challenge was how to hold over the leftover gnocchi for the next day.  I made up all the gnocchi for the first batch.  After I cooked some I put the rest in the fridge.  The next night I was all ready to cook it,   Alas I had kept it in the fridge on a baking paper lined metal tray and it had gone a worrying grey colour.  So I binned it.

The next batch I only rolled out enough gnocchi to cook for tea and kept the dough wrapped in clingfilm in the fridge overnight.  I rolled out the rest the next day but it was rather sticky and needed a lot of flour.  I still had a few extra gnocchi leftover which were so sticky that I left them out to dry a little but never had the energy the next night to cook them. 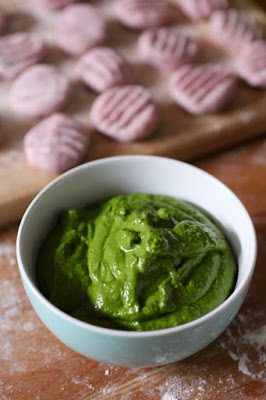 Finally I leave you with some random moments:

I am sending this to Chris at Thinly Spread for Pasta Please, the event for bloggers to share pasta recipes.

Truffle gnocchi
Adapted from The Art of Doing Stuff
Serves 4

Mix mashed potato, egg and about half the flour.  Add in remaining flour until the dough is no longer too sticky to handle.  Cut dough into about 4 parts and roll into a long sausage on a well floured surface.  Cut into 1.5cm pieces.  Roll each piece in a small amount of flour to remove the sticky ends and made a dimple with your finger.  Place on a well floured surface until ready to use.  (Or at this stage gnocchi can be stored in baking paper lined tray either in the fridge if not using for for a few days or in freezer to harden up before putting in a bag.)

Before cooking gnocchi, have on hand a slotted spoon, a colander to put cooked gnocchi in and if serving hot, a sauce to serve with it.  To cook gnocchi, bring a big saucepan of salted water to the boil and gradually drop about a quarter (or less) into the pot gradually.  If you drop them all at once it will cool the water to quickly.  When gnocchi is cooked it will rise to the surface.  Scoop out with a slotted spoon and put in a colander to drain.  Either serve hot with sauce or fry or bake with a sauce.

*NOTES: The amount of flour needed will depend on your mashed potato - I like a lot of milk in mine so even with a cup of flour the dough was workable with a lot of flour but still slightly sticky.  I also seasoned my mashed potato and added a tablespoon or two of truffle oil so no additional seasoning was required. I served mine with a lentil bolognaise one night and a pesto another.

Vegan gnocchi
A variation on the above gnocchi

See Truffle Gnocchi recipe above for method and notes.

On the Stereo:
The Sound of White: Missy Higgins
Posted by Johanna GGG at 23:01