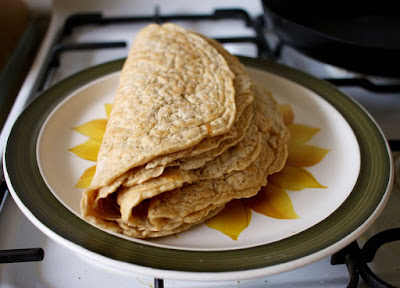 Quite some years ago, I bookmarked a recipe made by Jac of Tinned Tomatoes for yeasted pancakes (or flatbreads) called Staffordshire Oatcakes.  Today, while Sylvia and I were kicking around the house on school holidays, I finally made a batch for afternoon tea.  They were so filling that even Sylvia who usually has a raging appetite at tea time, was content with some chickpeas, tomatoes and cucumber for tea.

These oatcakes hail from Staffordshire in the West Midlands of England where they were very popular among the workers in the potteries.  It became common for these oatcakes to be sold from the windows of residential houses but according to Wikipedia, the last of these closed in 2012, though you can still buy them from commercial businesses. 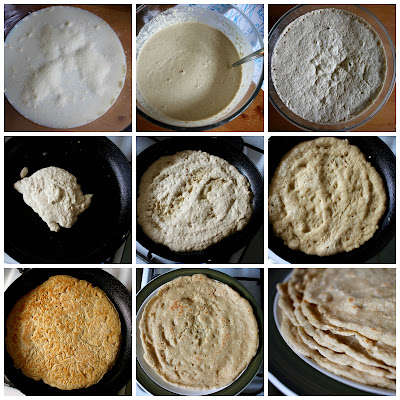 I would have made them for lunch but these yeasted pancake that take time.  (I find it ironic that they are called "fast food" for the potteries.)  At first I had to read a few recipes to get my head around what to do, but once I had fried a few, I found they were very intuitive.

I am not sure I got the batter thin enough.  I had to do a bit of spreading the batter around the pan, which was a challenge.  Perhaps a thinner batter would be easier.  After making these, I came across this lovely article about a similar yeasted pancake called a Derbyshire Oatcake that used more liquid (hence my notes in the recipe).  What I liked about this recipe was that the blogger left the batter overnight in the fridge so they would be easy to fry in the morning for breakfast. 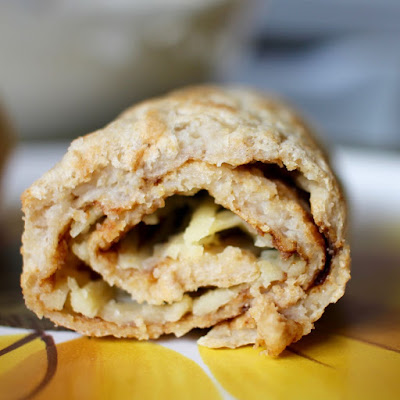 Apparently it is traditional to eat them with a savoury topping.  Cheese, sausages or a fry up.  I did try half one with jam because I had made jam for the school fete and one jar was there for immediately use because it did not seal.  I also had some with a classic Aussie combination of cheese and vegemite.

And at dinner, when like Sylvia I was not very hungry, I had a half oatcake with some dal.  I didn't need much this evening after our hearty afternoon tea.  (Just as well the ice cream we made was still firming up!)  Tomorrow Sylvia is going to a gymnastics holiday program and is keen to have an oatcake for her lunch.  I am a bit unsure about how well it will keep overnight.  I hope they keep well because they are just the sort of nutritious and filling food to eat during a day of activity.

I am sending these oatcakes to Tea Time Treats which is hosted by Lavender and Lovage, Travels for Taste and Jo’s Kitchen and this month is seeking Savoury Foods.

Heat milk and water to lukewarm in a large mixing bowl.  (I did this in microwave but you could do it on the stovetop in a saucepan.)  Stir in yeast and sugar.  Set aside for 5-10 minutes until yeast starts to froth up.  Measure out oatmeal, flour and salt.  Add to the frothy milk and yeast mixture and stir well.  The batter mixture is creamy to stir but drops off the spoon in lumps.

Cover with a cloth and set aside in a warm dry play for an hour.  At the end of the house it should have risen a bit and have a spongy texture.  While you are heating a frypan over medium heat, give the batter a stir.

Lightly grease preheated frypan with butter or oil.  Drop about a cup of batter into the frypan and spread into a large circle of 20-25 cm diameter with the back of a spoon.  I found that the batter followed the spoon and it was easier to spread if it had a few seconds to firm up on the pan side before spreading the rest of the batter about.  Don't worry if there are lots of humps and valleys in the batter as it seems to even out once cooked.

Fry for about 3-5 minutes until mixture has dried and when you flip it over the oatcake is a light golden brown.  Fry on the other side for about 2-3 minutes and then flip onto a plate.  Repeat with remaining batter.  Spread warm oatcakes with filling such as cheese, spreads or jam and roll up if desired.

NOTES: I blitzed my rolled oats to flour in my high speed blender.  I used 375ml each of milk and water but I think I would try more liquid next time, hence the suggestion of 500ml.  I used soy milk and margarine so my oatcakes were vegan.

On the Stereo:
You got me singing: Jack and Amanda Palmer
Posted by Johanna GGG at 23:22