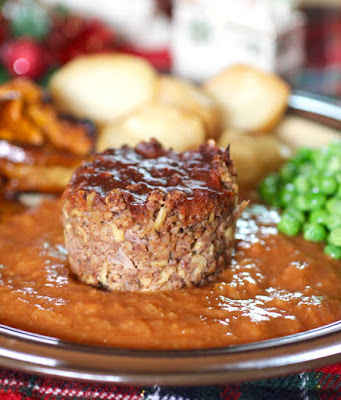 If you have read my blog over the years, you might remember that I grew up eating roast dinners regularly and when I went vegetarian over 20 years ago I discovered nut roasts made a great centre in a roast dinner and ever since I have eaten nut roast every Christmas dinner (with one exception).  So I have a particular fondness for nut roasts, especially during the festive season.

So it happens that recently I borrowed the Bed and Broccoli cookbook from the library but was too busy to read it and suddenly it was due back and so I quickly skimmed its pages and chose a recipe to try.  And I could not resist the simple nut roast recipe.  For those who have not heard of Bed and Broccoli, it is a vegan B & B in regional Victoria.  Imagine finding nut roast in regional Victoria!  I would swoon! 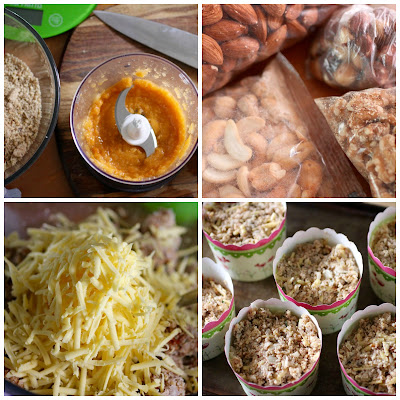 These nut roasts were intended to be baked in small loaf tins and brushed with glaze when hot.  One of the problems with nut roasts is that so often they turn to mush if you try to slice them when freshly baked.  Similarly these were so soft straight out of the oven they would have collapsed if I had  tried to take them out of the cupcake papers to brush with glaze.  So I spread it on top like a frosting. 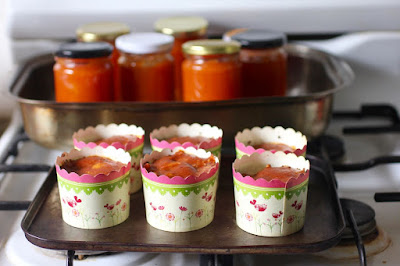 I had intended them to be eaten at a local Carols by Candlelight but it was such a cold night that we decided not to go.  (And then a week later it was too hot to go out in the evening, such is our odd weather).  Instead I cooked a roast dinner with roast potatoes, roast pumpkin and peas.  I made a stupendous gravy with the last of a tomato sauce thrown into the gravy.

I found that it was easy to take the nut roasts out of the muffin cup once cold.  It was still a bit fragile but if carefully handled it kept its shape.  Which made these one of the most attractive nut roasts I have made. 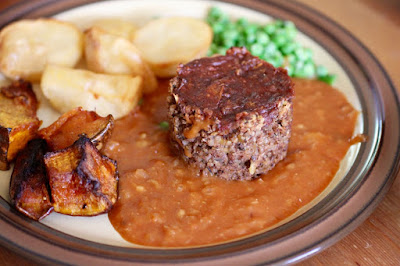 My main concern was that I didn't get the flavours of the glaze quite right.  Bed and Broccoli didn't call for seasoning but the base needed it and I think the glaze would have been better if I had seasoned it well.  However Bed and Broccoli used a BBQ sauce and i just put together an approximation of a BBQ sauce because I don't keep that sort of sauce in my kitchen.  The glaze was quite spicy and fruity.

Despite my uncertainty about the glaze, I loved these nut roasts when served with the gravy.  In fact I could have eaten more nut roast because it was so good.  I would highly recommend it to anyone searching for a vegan and gluten free nut roast.  Though a decent vegan cheese is pretty important.  But these are getting easier and easier to find.  Or if you are not vegan, you could just use a good dairy cheese. 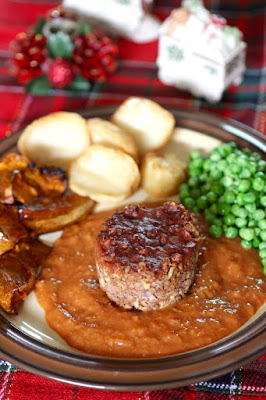 I was pleased to find an article from last year in The Telegraph on A Passionate Defence of the Nut Roast.  There have also been some great nut roasts online this year so methinks I am not alone in promoting the humble nut roast at Christmas, whether as part of a traditional roast dinner or a buffet of cold dishes.

I highly recommend you eat nut roast at Christmas.  I always do and could not imagine Christmas without it.  (Actually I could because one year in Ireland I was served stirfry vegetables instead of nut roast and I could have cried at how disappointing that Christmas dinner was, though my hosts were very kind people.)  So I finish with a simple plea to you.  Eat more nut roasts!

I am sending this nut roast to Jac for Meatless Mondays and Kimmy for Healthy Vegan Fridays.

Preheat oven to 200 C.  Line a muffin tin with 6 large muffin cups*.  Mix all nut roast ingredients. Spoon between muffin cups.  Bake for 20 minutes or until golden brown on top.  While nut roasts bake, mix all glaze ingredients together to make a thick sauce.  Check and adjust seasoning.  Remove from oven and divide the glaze among the nut roasts, spreading it thickly over each on in the muffin cups.  Best made the day before, cooled, removed from muffin cups and heated for about 15 minutes on 180 C.

NOTES: I have seen a similar nut roast recipe by Bed and Broccoli that uses tofu instead of apple puree and vegan cheese.  For the nuts I used almonds, cashews, walnuts and hazelnuts.  For the cheese I used biolife.  I think Daiya would work well here too.  I used basil as that was what I had on hand but other fresh herbs would do, such as parsley, thyme or chives.  For the muffin cups, I used quite large ones because I had them and they did not need to go in a muffin tin as they are very sturdy but if you don't have them muffin cups in a muffin tin are fine.  I used home made tomato sauce but a bottled one or a tomato puree would work fine here.

On the stereo:
Christmas with Boney M
Posted by Johanna GGG at 23:04