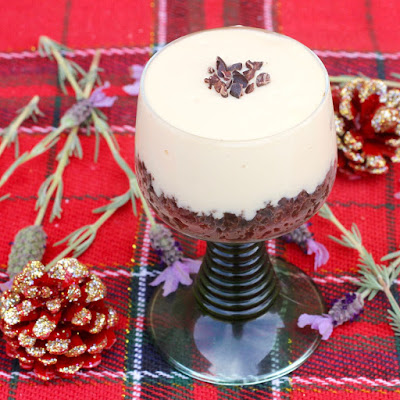 On Christmas Eve, Sylvia and I sat eating breakfast in the kitchen.  Suddenly there was the sound of glass breaking.  We stared at each other and then in the direction of the noise.  Huh!  Broken glass has been flung across the kitchen as one of my favourite goblets self-exploded.  It was really weird.  The only explanation I can think of is that we had used it for a caramel chocolate cheesecake only days before and it had exploded with happiness.  The cheesecake was that good! 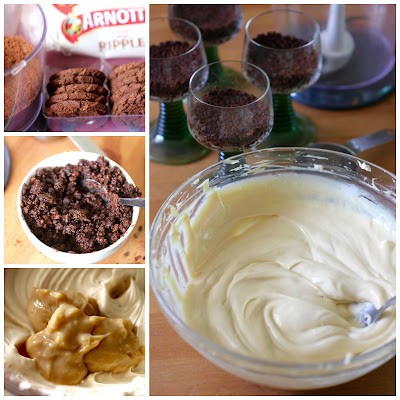 Over a month before, we had lunched with my family before my mum had left to visit my sister in Ireland.  She had made a family favourite, caramel tart.  When I left she gave me the remains of the caramel that she had made by boiling cans of condensed milk.  It wasn't until after she had returned that I finally used them.  The caramel has lasted well in a jar in the fridge with only a few crystals forming.

I don't make dessert often.  The occasion for the cheesecakes was that we were going to see the Christmas lights last week.  It meant that Sylvia was going to stay up much later than usual while we waited for darkness to fall.  So we had far longer for dinner than usual. 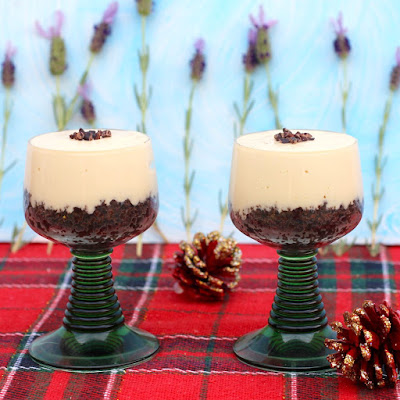 I didn't want a large rich cheesecake.  The idea that seems popular lately is to serve cheesecakes in little glasses so no baking or setting is required.  My beautiful op shop goblets are just the right size for such desserts.  (Sob!  Now I only have 3 after the glass explosion).
I had a brilliant idea of topping the cheesecakes with fudge chunks.  Luckily Sylvia reminded me that I had used them in choc chip cookies weeks ago.  Instead I used cacao nibs but Sylvia wanted choc chips which looks far less elegant. 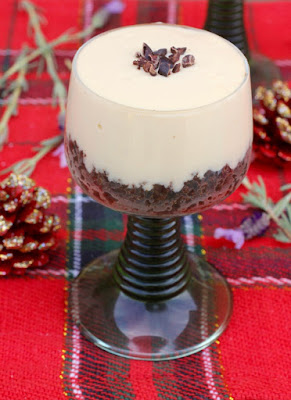 We all loved the cheesecakes.  It was very rich in a very good way.  Caramel and cream cheese work well together.  It a marriage of the unbearably sweet with mildly creamy cultured cheese.  I perhaps could have done with less biscuit base but no complaints.  Chocolate and caramel is such a brilliant pairing.  Sylvia only ate half of hers because it was too rich but she was very protective of her other half cheesecake.

I highly recommend these cheesecakes as an impressive dinner party dessert.  It is quite simple to put together and can be made ahead of time.  But I must warn you that you might wish you had just kept them all for yourself.  And if it is so good that your glasses spontaneously explode, don't say I didn't warn you!

I am sending this post to Jen who is hosting Elizabeth's No Waste Food Challenge this month.

Grind biscuits to crumbs in a food processor.  Melt butter and stir in biscuit crumbs.  Divide among four small glasses and press down firmly (I used the end of my wooden citrus juicer).  Set aside.

Beat together the cream cheese and caramel sauce.  Spoon into prepared glasses on top of the biscuit base.  I used the back of a knife to smooth mine across the top of the glass.

Sprinkle cacao nibs, choc chips or fudge chunks for garnish.  Can be made a day ahead and kept in fridge.  Best served chilled.

NOTES: Other biscuits or cookies can be substituted for the chocolate ripple biscuits. Oreos might work well here but require less butter.  The caramel sauce I used was quite thick.  It was made by boiling condensed milk.  You could also use dulce de leche, caramel top 'n' fill or your own caramel sauce.

On the Stereo:
Music to Watch Girls By: Various Artists
Posted by Johanna GGG at 21:35